×
You are here: Home / Frosting / Swiss Meringue Buttercream
This post may contain affiliate links. As an Amazon Associate I earn from qualifying purchases. Please read my disclosure policy.
Jump to Recipe Jump to Video Print Recipe 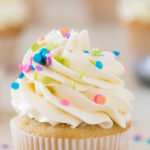 Swiss Meringue Buttercream is silky smooth, versatile, and perfect for people who find American buttercream to be too sweet. This recipe takes a bit of effort and patience, but it’s so worth it! Recipe includes a how-to video.

If you’ve ever been the kind of person to scrape the frosting off your cake because it’s just too sweet, today’s recipe is for you.

This frosting gets its texture from a meringue base made of granulated (not powdered!) sugar and egg whites. It’s not hard to make, but if you’ve mostly made your frostings away from the stovetop in the past (as I did for decades), this recipe might seem a bit more complicated than what you’re used to. Today we’ll walk together through all the steps in detail so you can make your own flawless batch of buttercream.

What you’ll love about it:

Similar to my German buttercream, this recipe starts on the stovetop and ends with lots of butter (but I personally believe the Swiss version is less fussy and easier to get just right!). Here are the key ingredients you’ll need:

How to Make Swiss Meringue Buttercream

I strongly recommend using a stand mixer for this recipe. Making this frosting by hand or even with an electric mixer would be a workout. I can’t even imagine how long it would take!

SAM’S TIP: To test if your sugar has full dissolved, rub a small bit between your fingers before proceeding to the next step. If you can feel any grit or grain at all, your sugar is not fully dissolved and you’ll have a gritty buttercream–so keep whisking until all the sugar is dissolved.

SAM’S TIP: “Stiff peaks” means that if you lift the whisk straight out of your meringue, the peak that forms holds its shape and doesn’t melt back into itself or fold over. This will take at least ten minutes or so. If you’d like a visual of this, check out the photo below or watch the video in the recipe card.

Sometimes during the process of adding the butter, your buttercream might break down and take on a curdled appearance. Don’t panic! So long as you’ve followed all of the previous steps correctly, everything is going to be just fine. Just keep mixing, just keep mixing, and by the time all of your butter is added, the buttercream should come back together. If it doesn’t, transfer your bowl to the refrigerator for 10 minutes and then try mixing again. Serious Eats has a great guide on rescuing Swiss Meringue Buttercream if you are convinced you’ve ruined it.

SAM’S TIP: Once the meringue reaches stiff peaks, I like to give my mixer a break while the bowl cools completely (some people keep mixing until it cools, but I don’t want to wear out my mixer!). At this point I also like to switch over to my paddle attachment for a smoother whip. Don’t start adding your butter any further until your bowl is completely cool and not even a tiny bit warm to the touch!

Does Swiss meringue buttercream need to be refrigerated?

Will it hold up to heat and humidity?

Unfortunately, this frosting does not fare well in the heat. While the meringue does help to add some structure to the frosting, all of that butter is going to want to do what butter does in the heat: melt! While you can keep this frosting at room temperature and it will hold its shape wonderfully, it will start to melt or become very soft in hotter temperatures or if served outside on a warm day.

What is the difference between buttercream and Swiss meringue buttercream?

Can I add food coloring?

Yes! I recommend gel food coloring for best results, but any kind should work fine. Simply stir it in at the end until you have the desired color.

Swiss meringue buttercream is silky smooth, versatile, and perfect for people who find American buttercream to be too sweet. This recipe takes a bit of effort and patience, but it's so worth it! Yields enough frosting to generously cover 24 cupcakes, an 8" or 9” two layer cake, or a 9×13” cake. This recipe works well under fondant and may be colored using food coloring.Recipe includes a how-to video. If this is your first time making Swiss meringue buttercream, I recommend watching this before beginning!
5 from 16 votes
Print Pin Rate
Course: Dessert, Frosting, icing
Cuisine: Swiss
Prep Time: 15 minutes
Cook Time: 5 minutes
Total Time: 20 minutes
Servings: 6 cups
Calories: 788kcal
Author: Sam Merritt

I do not recommend using pasteurized egg whites (the kind that you buy from the store in a carton) for this recipe.

If using a liquid measuring cup, you would fill to directly between the ¾ and 1 cup line

Swiss Meringue Buttercream may be made several days in advance of using it. Store refrigerated in an airtight container and then allow frosting to come to room temperature and stir well before using. If the buttercream seems to have lost some of its volume/lightness, use an electric mixer to whip it until it returns to its original texture.

Here are a few recipes to use up your leftover egg yolks!