×
You are here: Home / Frosting / Marshmallow Frosting
This post may contain affiliate links. As an Amazon Associate I earn from qualifying purchases. Please read my disclosure policy.
Jump to Recipe Jump to Video Print Recipe 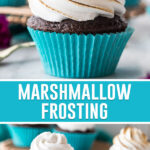 I’m sharing my favorite recipe for Marshmallow Frosting today! It’s simple to make, not too sweet, and made completely from scratch. Recipe includes a how-to video!

I’ve you’ve ever been disappointed with marshmallow frosting that wouldn’t fully set up or was just way too sweet, then you need to try my recipe. I’ve cracked the code on how to get the perfect light and fluffy texture, glossy white color, and delicate vanilla marshmallow flavor. And best of all–it’s easy to make, too!

Not only is my marshmallow frosting recipe simple to make, but it’s not overly sweet. In fact, it uses surprisingly less sugar than many of my other frostings, such as my classic buttercream frosting.

Why You’ll Love This Marshmallow Frosting:

SAM’S TIP: For those of you who prefer to bake without corn syrup at all, you can just use the filling for my oatmeal cream pies as a marshmallow frosting.

How to Make Marshmallow Frosting

SAM’S TIP: This frosting is great to serve as-is, but it’s even better lightly toasted! I bought an inexpensive culinary torch a few years ago (I’ll link to it in the recipe card) and it’s been so worth it for toasting things like meringue and this frosting.

If your frosting is not reaching stiff peaks, it’s possible that there was grease in your bowl or whisk, some egg yolk got in with the white, or water got in the bowl. Unfortunately you will have to start over if this happens. However, you may just need to whip it longer!

Does marshmallow frosting need to be refrigerated?

If consuming within two days, the frosting should be fine to sit at room temperature. Any longer than that, and you’ll need to refrigerate!

Any part of the frosting that is exposed to air will become firm, much like the exterior of a store-bought marshmallow. However, the interior, everything beneath the outside layer, will remain soft and sticky! 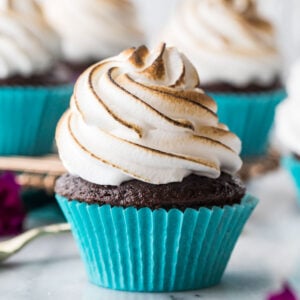 Recipes That Use Egg Yolks: