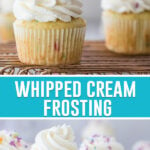 This stabilized whipped cream frosting recipe makes lightly sweetened, thick and fluffy, perfectly pipe-able frosting that doesn’t weep or lose its shape! This recipe comes together in 15 minutes and can be used to ice cakes or cupcakes or anywhere in place of store-bought whipped cream! Recipe includes a tutorial video!

I’ve received a record number of requests for this whipped cream frosting recipe, and here it is! While I love my existing whipped cream recipe and have bragged often about how stable it is, I’ve also advised that that one is not ideal for icing cakes or cupcakes.

Sure, it’s great, fluffy, un-fussy and so tasty, but if you want a whipped cream frosting, one that is guaranteed to hold its shape, not melt, and last for several days, you really need to stabilize it first.

This requires a simple extra step and a sprinkle of gelatin powder.

The end result is a frosting that’s lightly sweetened (those of you who want a frosting that’s “not too sweet” will love this one), fluffy and creamy, but still stable enough to pipe over cupcakes or frost a two or three layer cake. Pictured above it’s prettily piped over a batch of cupcakes that I made out of my vanilla cake recipe (of course I tossed in a few sprinkles for good measure!)

It may seem counter-intuitive at first to liquify the gelatin and allow it to set up only to re-liquify it again by melting, but it’s important! This is a process known as “blooming” the gelatin, which ensures that the end result is not only smooth (rather than grainy or lumpy) but also that it stabilizes properly.

SAM’S TIP: While the cream must be beaten very well, it is possible to over-beat your cream, leaving you with a rough, curdled-looking mess. If you accidentally overdo it, don’t panic, you might still be able to salvage things! Simply add 1-2 Tablespoons of heavy cream and mix until you’ve reached the proper consistency.

Why is my frosting not reaching stiff peaks?

There are several reasons this can happen. Most likely, you simply need to keep beating the mixture, it can take some time and requires patience! However, if your gelatin was very, very hot when you added it to the cream, if the cream was not cold enough, or if you are in a very warm kitchen, your cream may not thicken as it should. Set yourself up for success and make sure you follow the steps for blooming the gelatin and use cold cream and a cold bowl (and beaters, too!).

How long does whipped cream frosting last (and how long can it sit out)?

This frosting lasts up to 4-5 days stored in an airtight container in the fridge in an airtight container. While it does well at room temperature due to the gelatin, it’s still a dairy-based frosting and so is not ideal for high heat for long periods of time (such as outdoor parties in the summer!). I recommend keeping it chilled. At room temperature (below 75F/24C) I wouldn’t leave it out for more than an hour or two.

Can I use whipped cream frosting under fondant?

Unfortunately I don’t recommend it. If you have a cake that you’d like to use fondant with, I would recommend using my classic buttercream frosting or cream cheese frosting instead.

Is there a way to make stabilized whipped cream without gelatin?

There are many different methods for making whipped cream frosting, but personally I found that this method yielded the most stable results with the most authentic whipped cream taste.
I tried many methods including using more powdered sugar (made the frosting too sweet and did not last as long as this version with gelatin), using a food processor (didn’t hold its shape long enough and still melted), adding cream cheese (tasty, but changed the taste far too much) and using powdered milk (this worked fairly well, but did not hold its shape as long and modified the taste a bit). Ultimately I recommend sticking with the method written in my recipe below. 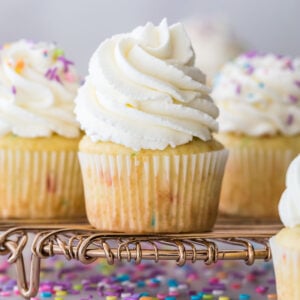 I recommend using the frosting for decorating immediately after preparing for best results, but alternatively you may store in an airtight container in the fridge for several days before using as desired. Stabilized whipped cream will keep in the refrigerator in an airtight container for up to 4-5 days. This recipe may also be frozen once it is piped onto your dessert.

Tried this recipe? Show me on Instagram!Mention @SugarSpun_Sam or tag #sugarspunrun!
« How to Make Streusel (Crumb Topping)
Lemon Crumb Bars »