×
You are here: Home / Desserts / The Best Banana Pudding Recipe
This post may contain affiliate links. As an Amazon Associate I earn from qualifying purchases. Please read my disclosure policy.
Jump to Recipe Jump to Video Print Recipe 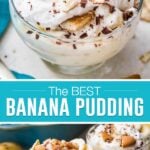 My banana pudding recipe is made completely from scratch and is way better than any boxed pudding! If you’re intimidated by the thought of making this classic show-stopper 100% homemade, don’t be! I’ll walk you through all the steps and I’ve included a step-by-step video!

I hope you bookmarked last week’s vanilla wafers recipe because you’re going to need it today. As promised, here is my 100% from-scratch, homemade banana pudding recipe.

While you can substitute store-bought cookies (and I even had to use some in these pictures because someone ate all of my from-scratch ones… Zach), there is nothing like a truly from-scratch banana pudding.

And this one is the real deal. We’re making our own rich and creamy vanilla pudding base, folding in homemade whipped cream, and layering homemade (preferably) vanilla wafers throughout. No boxed Jello mixes, no Cool Whip, just the good stuff.

Let’s talk about our ingredients briefly before we begin…

How to Make Pudding for Banana Pudding

Your first step is to make the pudding. This is very similar to the pastry cream that I use in my eclairs and cream puffs. It will need to be allowed to cool completely before you can serve the banana pudding, so plan ahead!

The pudding will need to cool completely before you can use it to make banana pudding. Cover the surface with plastic wrap to keep a skin from forming and pop it in your fridge for a few hours (this can be made 1-2 days in advance of assembly).

SAM’S TIP: The pudding will continue to thicken as it cools, but you still want it to be thick enough that it coats the back of a spoon before you remove it from the heat.

SAM’S TIP: The riper your bananas are, the more banana flavor will be infused into your pudding. However, don’t choose bananas that are so (over-) ripe that they’re mushy or they’ll be difficult to handle and prone to browning quickly.

How to Assemble Banana Pudding

Just before serving, crush additional vanilla wafers over the top (don’t do this in advance or they’ll lose their crispness and you want some crunch) and use a potato peeler to “peel” chocolate curls off of a chocolate bar.

SAM’S TIP: Toasted coconut is another great addition to the top of banana pudding! Yum!

Why is my banana pudding runny?

Usually this is a result of 1) heating the mixture too fast (which doesn’t give the sugar the chance to melt properly) or 2) simply not cooking for long enough. It takes time, but make sure the pudding is thickened before you remove it from the heat. It may be helpful to watch the video before beginning.

Can I use a different size serving dish?

Yes. You can make this dessert in a 9×13 pan, just use a thin layer of pudding on the bottom and you will have just a single layer of vanilla wafers and bananas topped with the remaining pudding and then whipped cream.
You may also make this in a large trifle dish or in individual serving dishes (mason jars work well!). 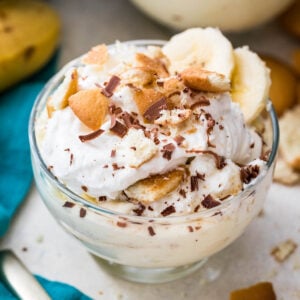 Separate the egg whites into a clean dry container and save them to make meringue cookies or angel food cake!

This recipe may be made in a 9×13 pan (do one bottom layer of cookies and bananas topped with the pudding mixture and then whipped cream) or in a trifle dish. It may also be portioned into individual trifle dishes or mason jars.

Banana pudding should ideally be assembled several hours before serving to let the flavors develop, but preferably no more than 48 hours before serving, as the bananas will eventually begin to brown and break down. However, the pudding can be prepared 2-3 days in advance of assembling, and the cookies (if making homemade) can be prepared up to 5 days in advance. I recommend making the whipped cream and preparing the bananas immediately before assembly.

I do not recommend freezing as the pudding does not hold up well to being frozen and then thawed.

Well we had a wonderful week+ of Breha following me around outdoors and happily returning to me every time I called her name, but now she’s discovered that her new backyard is full of STICKS. Sticks are wonderful and much more interesting than I am, so guess we have more training to do! PS: Thank you to everyone who left such kind comments on my post about her, I’m still working on answering them all! 💜