×
You are here: Home / Desserts / Bars & Brownies / The Best Brownie Recipe
This post may contain affiliate links. As an Amazon Associate I earn from qualifying purchases. Please read my disclosure policy.
Jump to Recipe Jump to Video Print Recipe 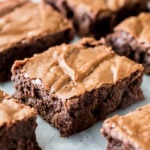 Better than box-mix by a thousand miles, these easy homemade brownies from scratch are made in one bowl and are supremely chocolaty, fudgy, and entirely addictive. This might just be the best brownie recipe in the world! 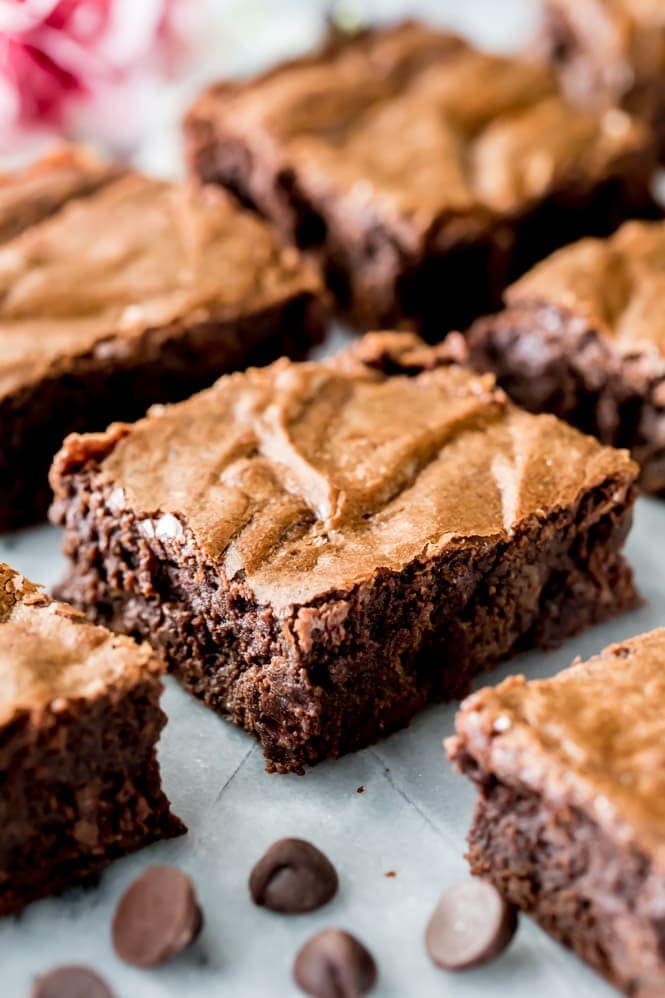 If I were asked to sum up the past two weeks or so of my life in a single word, it would be Brownies.  In a sentence: OMG, somebody help me, I am drowning in brownies.

There’s been a lot of testing. I made six batches of brownies in a single night, none of them perfect. I think I made nearly 20 batches in a single weekend.

And finally, after lots of stress, lots of Pandora-soundtracked baking sessions and collective hours of Leia pouting that I wouldn’t play tug with her, the ultimate easy, one bowl brownies from scratch have arrived. 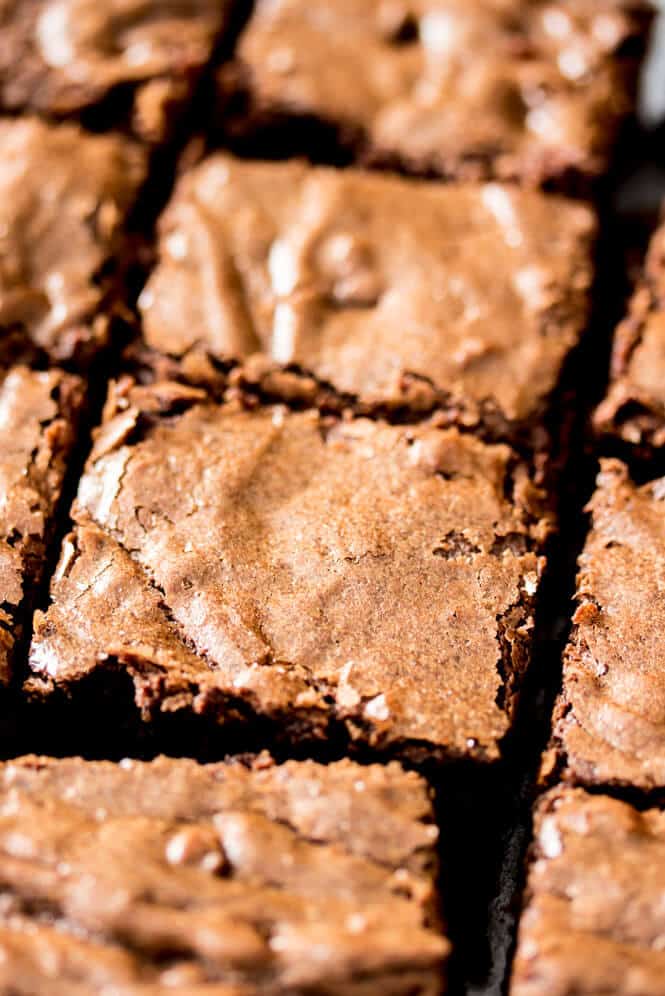 A Recipe Worth Making Again & Again

I originally shared this recipe with you a few years ago, and since then it’s received rave five star reviews and more fan mail than just about any other recipe on my site (except maybe my worst chocolate chip cookies). And I get it, they’re that good.

With a thin, delicate, slightly crinkly meringue-esque crackle-top that gives way to a decadently rich, chewy, moist brownie center. Brownies so insanely chocolatey, they are a chocoholic’s dream.

Today I’m re-sharing this recipe with some updated photos and a video as well as tips and tricks. At its core, this is a no-frills, easy brownie recipe that really needs little introduction or explanation, but if you’re like me and love nerding out about nitty gritty recipe details, read on. 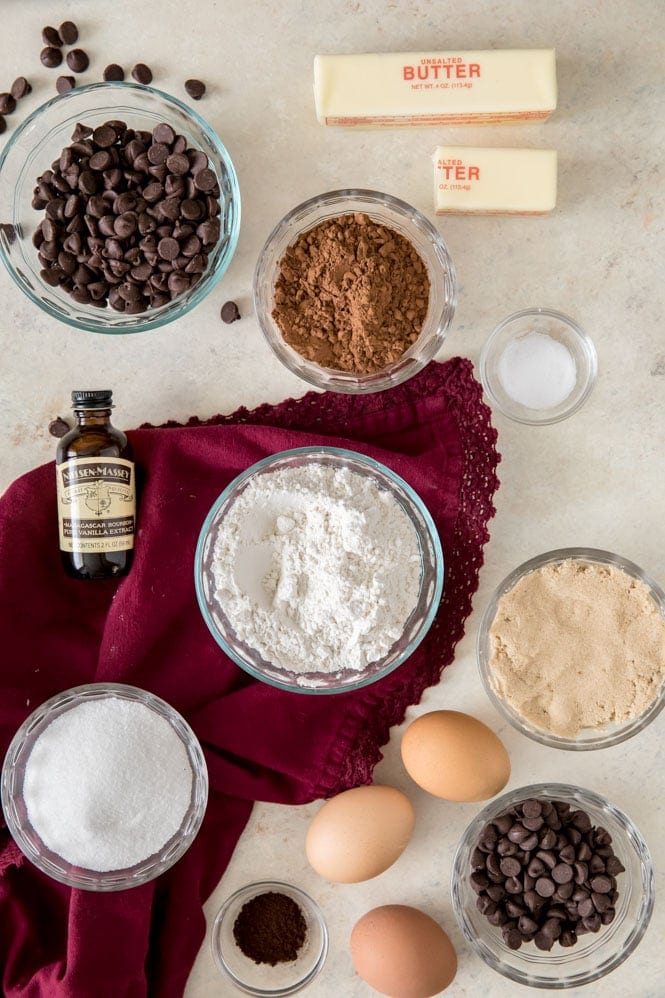 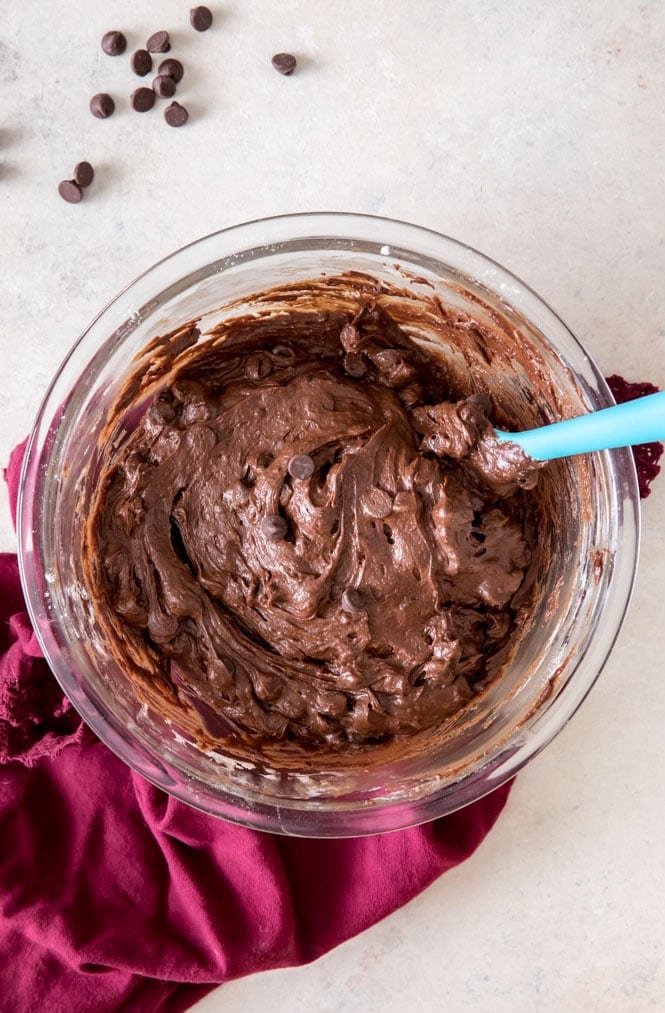 So What Makes these the BEST Brownies From Scratch?

Intense Chocolate Flavor — These brownies are made with melted chocolate (either chips or a chocolate bar) and cocoa powder, which are blended together in such a way to bring out the richest, chocolatiest flavor possible.

We’re also adding a sprinkle of instant coffee which will not make these brownies taste like coffee, but will enhance that chocolate flavor even more. And I haven’t even mentioned yet that we’re tossing in even more chocolate (chips) before all is said and done.

Two Types of Sugar — Many brownie recipes stick to white granulated sugar only. Here, we’re using a blend of granulated and brown sugar. The molasses in the brown sugar helps to not only enrich the flavor of the brownies, but also to make them more moist and chewy than they would be otherwise.

An Extra Egg Yolk — While egg whites often add airiness and levity to our baked goods, yolks help to make them more tender and richer. Since we want dense, chewy brownies, we’re tossing in an extra yolk to help with the texture, but leaving out the egg white, which could make these brownies more cakey rather than chewy.

Tips for Making the Best Brownies

Melt Chocolate and Butter Gradually. When melting your butter and chocolate together, make sure to heat in brief spurts (about 15-20 second intervals) stirring well in between. Heating everything at once for a long period of time 1) increases the chance that the butter will explode all over your microwave 😫and 2) makes it more likely that your chocolate will get too hot and will seize (/it’ll be grainy and won’t be usable). Go slowly and stir often!

Stir Your Eggs Really, Really Well. This helps to encourage those delicate, crackly brownie tops. With a lot of my recipes (like my muffin recipes) I recommend mixing cautiously and slowly. No need to worry about over-mixing when it comes to brownies!

Chilling — An Optional Step. I know a lot of my cookie recipes call for chilling, but have you ever chilled your brownie batter? During my brownie-recipe-research, I spotted a few suggestions to chill the batter before baking. Fudgier brownies, crinklier tops, richer taste, and more were promised by simply chilling the brownie batter in the fridge.

Bon Appetit suggests refrigerating for at least an hour and up to 24 hours, but I hardly have the patience for that. However, I did find that 15 minutes in the fridge seemed to yield extra fudgy brownies with shinier, cracklier tops,  so I’ve included chilling as an optional step in the brownie recipe below.

OK and just one more thing!

Slightly under-bake your brownies.  Just ever so slightly, just enough that there are still some moist crumbs on your toothpick when you test the brownies.  Normally we look for a clean toothpick when baking, now we’re looking one with moist crumbs (but not liquid batter). We want chewy, moist brownies, so just slightly under-baked is perfect. Plus, your brownies will continue to cook slightly as they cool out of the oven. 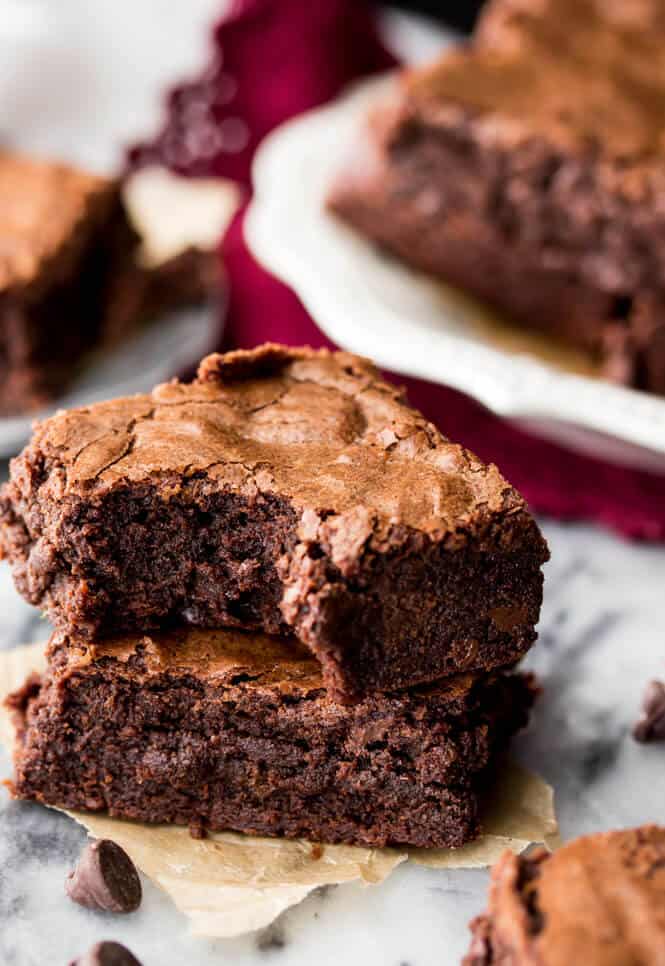 This is truly the easiest, ultimate, best brownie recipe. And I really think you are going to love it.  Enjoy!

Let’s bake together! Check out my how to make Brownies video at the bottom of the recipe! If you enjoy watching, make sure to subscribe to my YouTube channel! 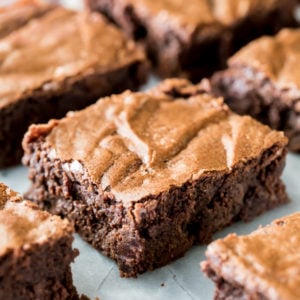 Ditch the box-mix and make your next batch of brownies from scratch! This is the BEST Brownie recipe, fudgy, chocolatey, rich, and made in just one bowl! Be sure to check out the how-to video below the recipe!
4.83 from 151 votes
Print Pin Rate
Course: brownies, Dessert
Cuisine: American
Prep Time: 10 minutes
Cook Time: 30 minutes
Total Time: 40 minutes
Servings: 16 brownies
Calories: 284kcal
Author: Sam Merritt

¹This recipe can also be made in a 13x9 pan, it will need to bake for about 16-18 minutes in a 13x9. I used a metal baking pan for this recipe, if you opt to use a glass dish keep in mind that the brownies may need to bake for longer. ²Alternatively you may grease and flour your pan -- the parchment paper is a little wiggly when you're trying to spread your batter into it, but I prefer it for ease of cleanup. I used a metal baking dish to make these brownies. If you use a glass one, you may need to bake them for longer.

Can I Add Nuts to this Brownie Recipe? 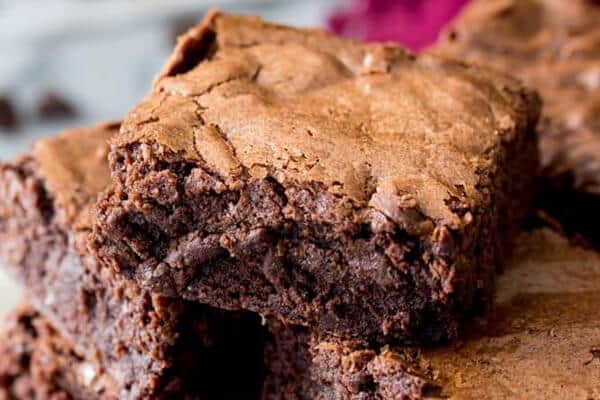 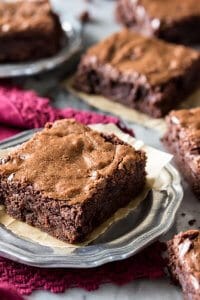 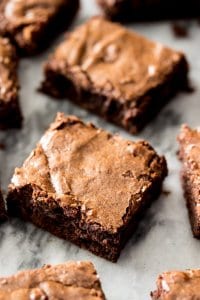 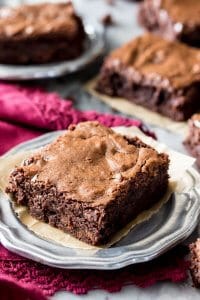 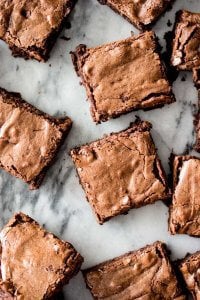