×
You are here: Home / Kitchen Tips / Baking Powder vs. Baking Soda
This post may contain affiliate links. As an Amazon Associate I earn from qualifying purchases. Please read my disclosure policy. 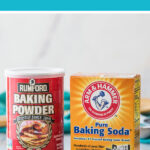 They sound similar, look similar, and even have similar ingredients–but baking powder and baking soda are NOT the same thing! Learn why some recipes use Baking Powder vs. Baking Soda (or both!), how to make quick substitutes, and when its time to buy a fresh box.

You’ve used them both in pancakes, muffins, and cakes, but do you know why? Most bakers have these two ingredients in their pantry, but not everyone knows what they do and how they’re different. I often receive comments asking if baking powder can be substituted for baking soda in a pinch, and vice versa.

Today, I’ll be answering that question and covering everything else you need to know about baking powder and baking soda, from how to use them, to how to test if they’re still fresh (they can go bad pretty quickly!).

I know some of you might not want to read this entire post, so I’ll cover the most important point now: baking powder and baking soda are NOT the same thing, nor are they 100% interchangeable in recipes. You’ll have to keep reading to learn why…I can’t give you all the answers right away! 😉

What Is Baking Soda Used For?

Baking soda is a leavening agent, which means it creates rise and lift in baked goods. Egg whites are also leavening agents (angel food cake is a good example of this) and so is yeast (like in cinnamon rolls or pizza dough).

However, unlike egg whites or yeast, baking soda requires an acid to create lift. Baking soda is alkaline, and when combined with an acid, it activates and releases carbon dioxide, which ultimately creates rise. Buttermilk, lemon juice, and vinegar are all common acids, as well as honey, sour cream, brown sugar, and even natural cocoa powder (Dutch process is actually alkaline!).

Baking soda isn’t always used for baking though, and its not always added for lift. Soft pretzel dough is dipped in a baking soda and water mixture to give the pretzels their signature chewy texture and golden exterior. I add a small amount of baking soda to my tomato soup to help neutralize the acidity of the tomatoes. If you’ve ever made my honeycomb candy, then you know that baking soda is what creates their airy, crunchy texture. Most of the time though, you’ll find baking soda in cakes, cookies, and muffins, and sometimes, you’ll even find it paired with its close cousin, baking powder.

What Is Baking Powder Used For?

Since it already contains an acid, baking powder is typically used in recipes that don’t require an additional acid, like scones or my vanilla wafers.

Is Baking Soda the Same as Baking Powder?

While they look similar in a measuring spoon, baking powder and baking soda are NOT the same thing. A quick look at their chemical composition proves that they cannot be swapped interchangeably, at least not on their own.

Because of this, you cannot swap baking soda for baking powder; the acid will be missing and the reaction simply won’t happen. Instead, you could try making your own homemade baking powder, or you can try a substitute.

I’ll preface this by saying that the following substitutions won’t work in every recipe and there’s no guarantee they will work at all. I personally do not like to use substitutes, so my official recommendation is to NOT use a substitute. However, these may be worth a try if you’re in a real pinch. If you try any of them, please let me know how they worked out for you in the comments!

SAM’S TIP: You can double or triple the ratios for homemade baking powder to keep some on hand. If you choose to do this, add cornstarch to prevent clumps from forming–you’ll just need to add an amount equal to your baking soda.

Why do some recipes call for both baking soda and baking powder?

Sometimes baking soda alone isn’t enough to leaven a recipe, so baking powder is added (as with my chocolate chip cookies). In other instances when a recipe uses an acid for its flavor, you’ll need both ingredients to maintain that flavor while also adding lift (baking soda alone would neutralize the acidity and you’d lose the flavor). And finally, sometimes baking soda is added to promote browning in a recipe that relies on baking powder for lift.

What is the best way to store baking soda or baking powder?

A cool, dry, dark place away from moisture and humidity is best. This can be your pantry or a kitchen cabinet.

Side note: if you’re using a box of baking soda to neutralize odors in your fridge, do NOT use that same box for baking too! Buy a separate box for baking and keep it outside the fridge.

How can I test my baking soda or baking power to see if its still good?

Once opened, your baking soda and baking powder should be used within 3-6 months for optimum freshness and power. After that, they’re still safe to consume, but they may not work as well (most complaints about biscuits that don’t rise are from bad baking powder!)

To test your baking soda, you’ll just need to add a small amount to a bowl. Then, add a splash of acidic liquid (vinegar or lemon juice will do) and see what happens. If the mixture immediately starts to bubble and fizz, your baking soda is fine to use for baking. If not, its time to buy a new box!

To test your baking powder, add about a half teaspoon to a bowl of hot water. If the mixture produces lots of bubbles, your baking powder is still good! If not, head to the store or try making your own using the measurements mentioned above.

I hope this was helpful! Let me know if you’d like to see more posts like this in the future!