×
You are here: Home / Donut / Boston Cream Donuts
This post may contain affiliate links. As an Amazon Associate I earn from qualifying purchases. Please read my disclosure policy.
Jump to Recipe Jump to Video Print Recipe 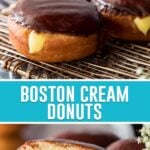 These homemade Boston Cream Donuts are surprisingly easy to make and taste SO much better than the ones you get from the coffee shop. You’ll fill them with silky smooth vanilla custard and dip them in a rich chocolate glaze before they’re ready to be devoured. Recipe includes a how-to video!

Boston Cream Pie, But Make It a Donut

Skip the trip to the corner coffee shop (and those previously frozen, so-so donuts) and make these Boston cream donuts from scratch!

These bad boys are the donut version of my Boston cream cupcakes, and they’re dangerously decadent. Their golden brown shell is based off of my homemade donuts, except we’re leaving them whole this time so we can fill them with homemade pastry cream. And of course, we’re dipping them in a chocolate ganache glaze–because you can’t have Boston cream donuts without that glossy chocolate top!

This recipe is shamelessly rich and time consuming, but it’s also 100% worth the indulgence and effort. When made properly, these donuts are pillowy and tender, the chocolate glaze is soft, yet firm enough to not make a mess, and the pastry cream is silky smooth vanilla perfection. Thanks to instant yeast, the hardest part about this recipe is the frying. If frying is a skill that you’re not comfortable with, don’t worry: I’ve made sure to include plenty of tips and visual cues to help you succeed.

Let’s get into it!

Surprisingly, the ingredients for this recipe aren’t overly fussy or complicated. Here’s what you need:

SAM’S TIP: When cutting the donuts out of the dough, make sure to get as many cuts out of your first roll as you can. While you can and should regroup the scraps to cut more donuts, the donuts from your second cut won’t be as pretty and will be harder to fill.

How to Make Boston Cream Donuts

SAM’S TIP: Proper oil temperature is very important when frying. Oil that is too hot will leave your donuts burnt or overcooked on the outside and either dry inside, or possibly worse, raw inside. On the other hand, oil that is too cold will cause greasy donuts. I like to use my first donut as a test donut and check the inside after it’s cooled for several minutes to make sure it’s not gooey inside. And remember to always let the oil come back to temperature between donuts!

What’s the difference between Bavarian and Boston cream donuts?

I wish I had a more straightforward answer, but honestly, the names are often used interchangeably and it can be pretty confusing.

Most of the time, Bavarian cream donuts have the same custard filling (sometimes its lightened up with whipped cream or sometimes its thicker), but instead of being topped with chocolate, they are dusted with powdered sugar or coated in granulated sugar. I have seen Bavarian cream donuts out there that have a chocolate topping too, and that’s where things get confusing.

Regardless of what you call them, they’re an indulgent, cream-filled treat that practically begs to be bitten into!

Do Boston cream donuts need to be refrigerated?

Since they’re filled with pastry cream, any leftover donuts must be stored in the fridge and eaten within 40 hours. I highly recommend eating them while they’re fresh though, because the donut portion tends to degrade and dry out in the fridge.

Can I mix this dough in a stand mixer?

Yes! I like to do it by hand, but you can easily make this recipe in a stand mixer fitted with a dough hook attachment. Make sure you watch the video to see how your dough should look at each step! 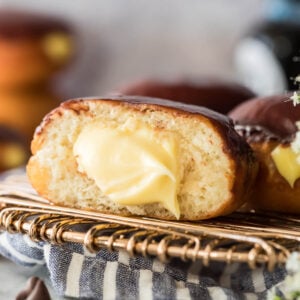 These homemade Boston cream donuts are surprisingly easy to make and taste SO much better than the ones you get from the coffee shop. You'll fill them with silky smooth vanilla custard and dip them in a rich chocolate glaze before they're ready to be devoured. Recipe includes a how-to video!
5 from 5 votes
Print Pin Rate
Course: Breakfast, Dessert, Donut
Cuisine: American
Servings: 9 donuts
Calories: 409kcal
Author: Sam Merritt