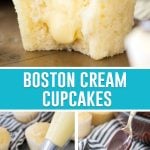 Fluffy vanilla cupcakes filled with Boston cream and topped off with a silky chocolate ganache. Made completely from scratch, this Boston Cream Cupcake recipe yields 24 cupcakes but can be cut in half. Includes a step-by-step video! 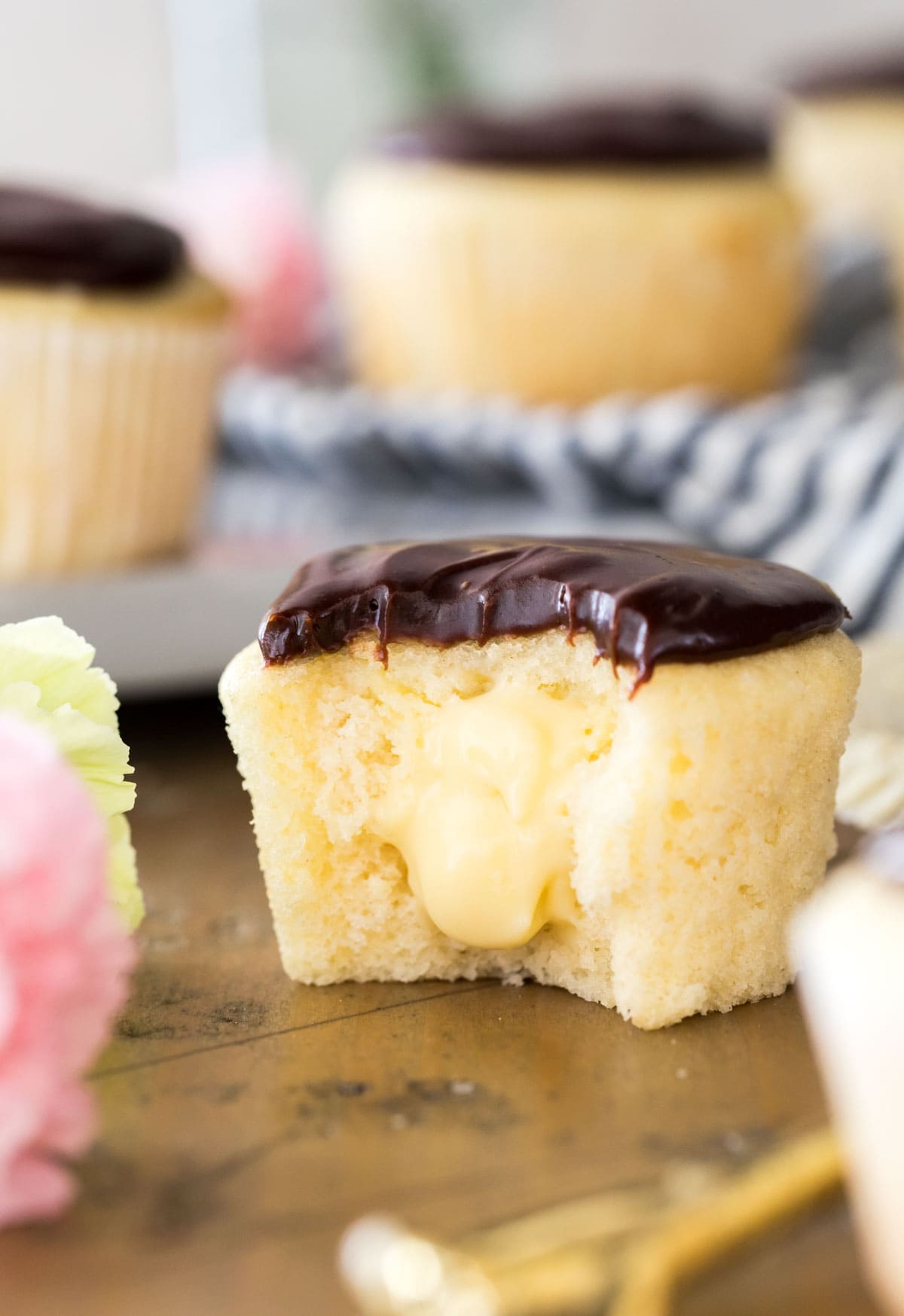 If you’ve ever had a slice of Boston cream pie before, you already know that it’s not actually a pie, at least not in the traditional sense. Rather than being neatly served in a pie crust, Boston cream pie is actually a vanilla cake filled with custard and topped with silky chocolate ganache.

Since we’ve already broken with classic pie convention, I see no harm in taking things a step further and serving in cupcake form, instead. Boston cream cupcakes are even more delicious than the faux-pie, anyway, if you ask me, because our ratios of cream, cupcake, and chocolate are perfectly proportioned and you get just the right amount of each in every bite.

Today’s recipe is a bit more involved than some of my other cupcake recipes so to make it worth your while it yields 24 cupcakes, though you could certainly cut the recipe in half if needed (or if you don’t happen to have 9 eggs lying around!). 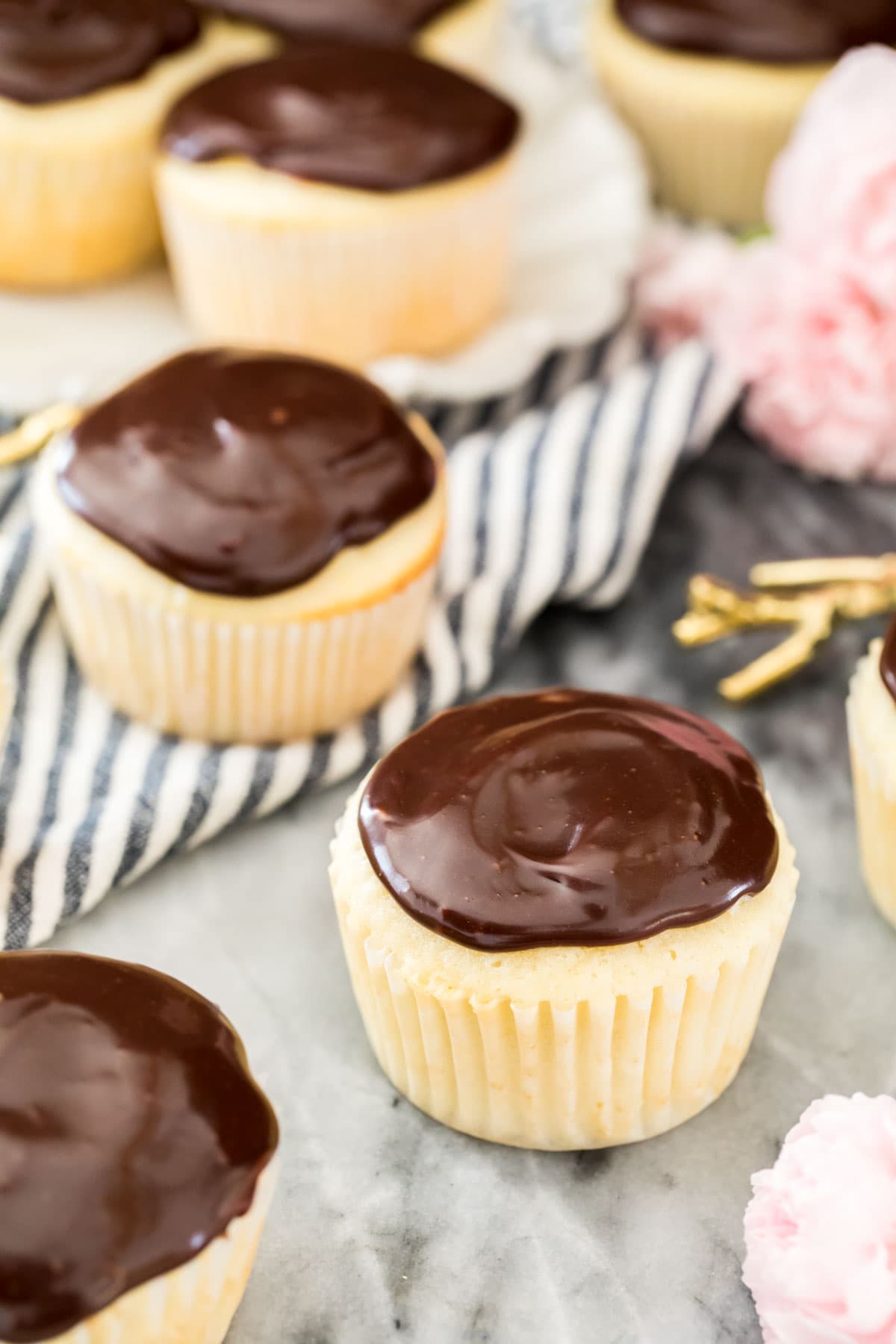 Many Boston cream cupcake recipes take some liberties with the Boston cream filling and use instant vanilla pudding instead. I get it, honestly, because making Boston cream (pastry cream) is a bit more time consuming and there’s some more technique involved. However, I think the effort is completely worth it so I’m including my pastry cream recipe in today’s post. This is definitely a recipe worth learning, I’ve used it frequently on the blog, and once you master it you’re halfway on your way to making perfect homemade cream puffs or flawless French Eclairs!

If you’ve never made Boston cream before, make sure to watch how I make it in the video before beginning. Since the cream will need to cool for several hours before it is usable, I recommend making it first (or you can make it up to 3 days in advance of making/assembling the cupcakes). 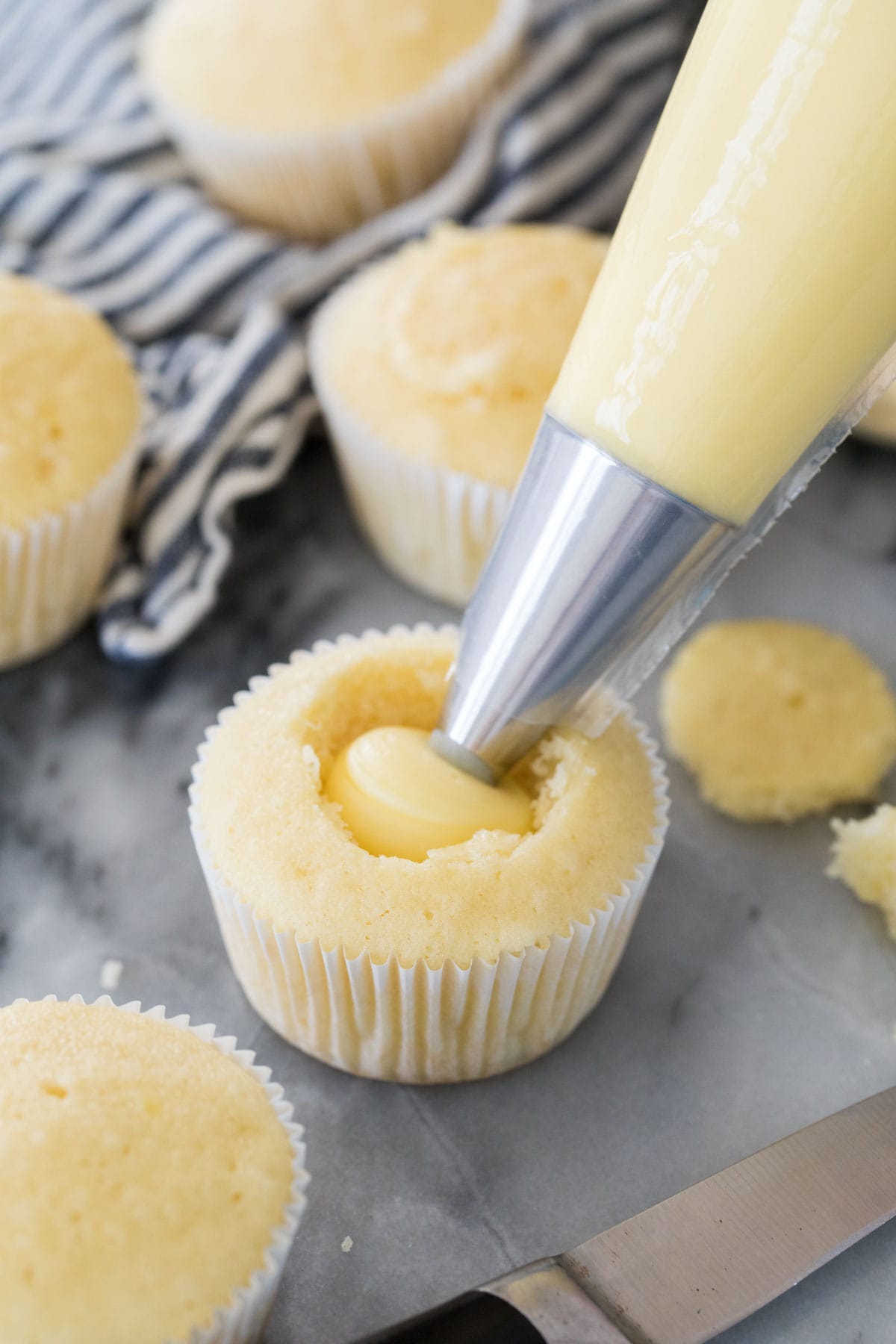 Some people use fancy cupcake corers to fill their cupcakes, but I’ve never owned one and have found that a knife works just fine.

First let the cupcakes cool completely. Use a sharp knife to carefully carve a hole that’s 1 ½″ wide at the top and slightly narrows a bit until you’ve made a 1″ deep cavity into the cupcake. Remove this core and slice off the bottom, reserving about a ¼″ deep layer of the surface. This will be your plug once you fill your cupcakes (see photo below). You might recognize this carving technique from my gender reveal cupcakes or pinata cupcakes, and in fact it can be used to fill just about any cupcake recipe, with just about anything.

Then, fill your cupcakes with chilled pastry cream. You can fit a piping bag with a simple round tip or just snip the corner off of a ziploc bag (or, really, just use a spoon to dollop in the frosting, but it won’t fill it as compactly). Fill the cupcake almost to the brim, then cap the cream with your reserved cupcake plug. 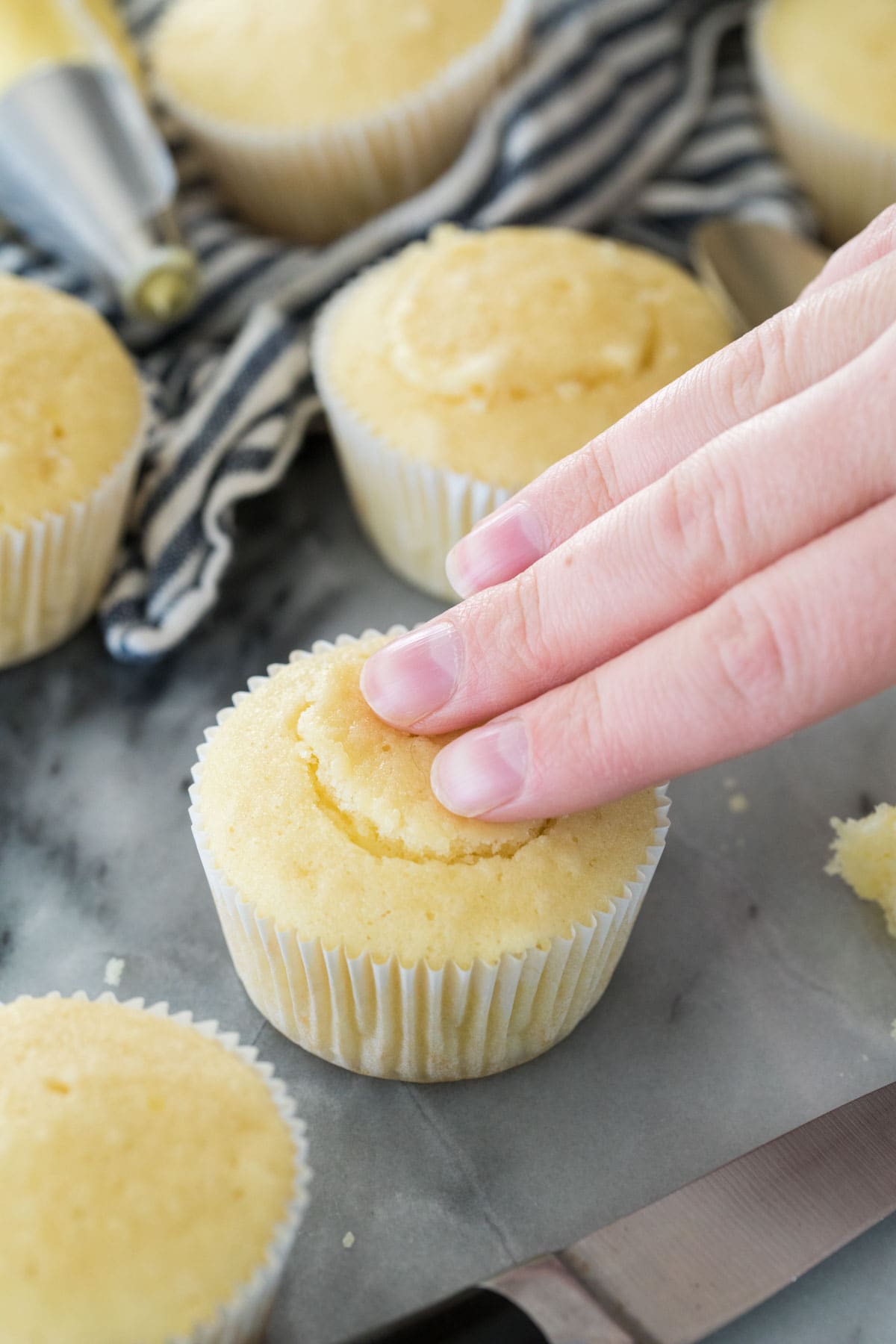 No Boston cream cupcake would be complete without a shiny, silky layer of chocolate ganache. I make mine in the microwave, heating together chocolate, cream, and corn syrup until melted and then stirring in a bit of powdered sugar.

The corn syrup that is used here is not the same thing as high fructose corn syrup (and I’ve used it in some of my most popular recipes, like my favorite sugar cookie icing), but if you don’t want to use it or don’t have it in your pantry, just leave it out. Your ganache just won’t be quite as glossy or thick.

Immediately after melting your ganache it will be a bit too thin to pour over your cupcakes without making a mess and running right off the top. Let it thicken for at least 10-15 minutes or so before spooning (generously!) over the surface of each cupcake.

If you want to try a more traditional type of frosting, I recommend my favorite chocolate frosting instead. 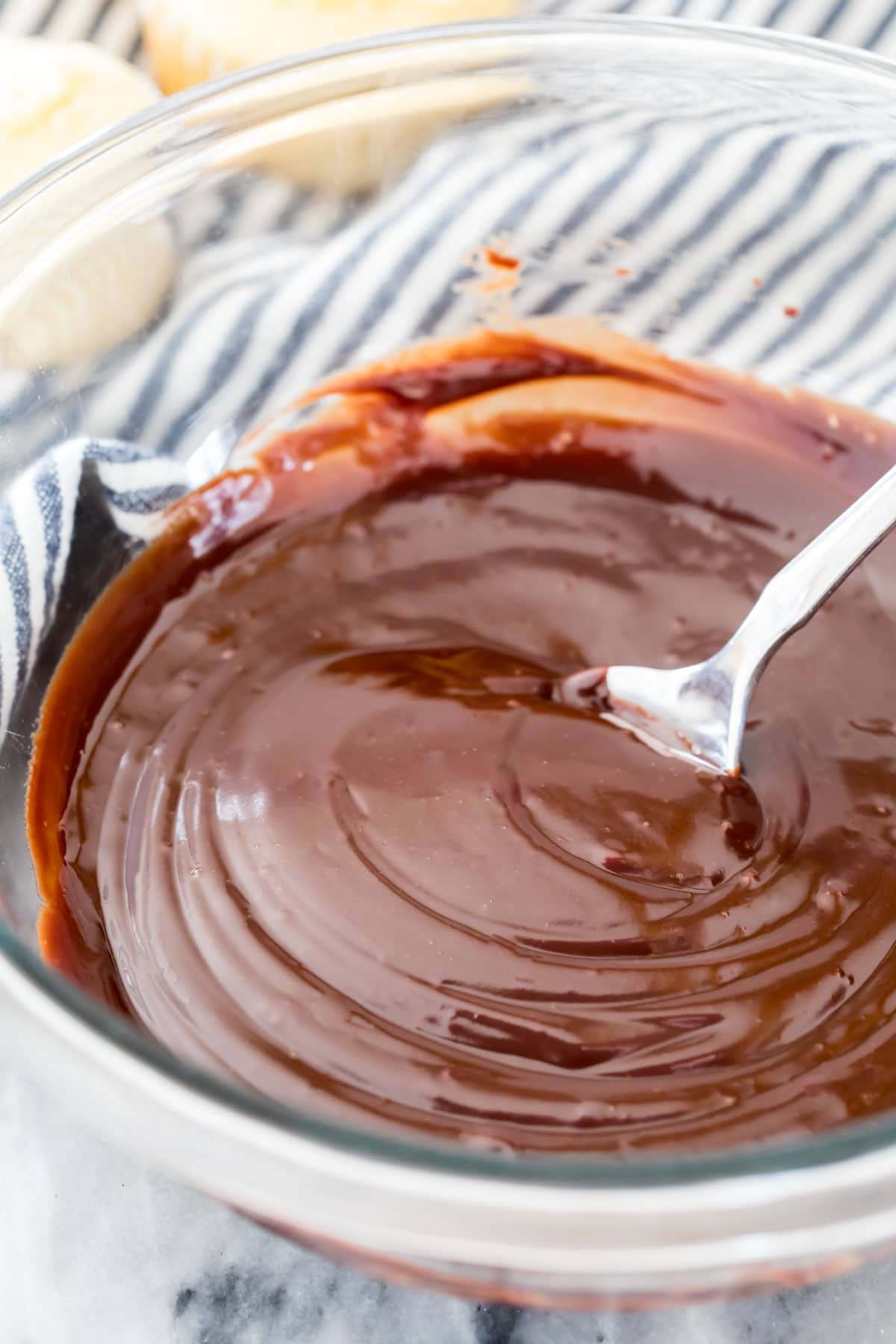 Store in the refrigerator in an airtight container, they’ll keep for 4-5 days this way. Because of the cream filling, I recommend keeping Boston cream cupcakes at room temperature for no longer than a few hours.  I don’t recommend freezing this recipe as the pastry cream may break down in the freezer. 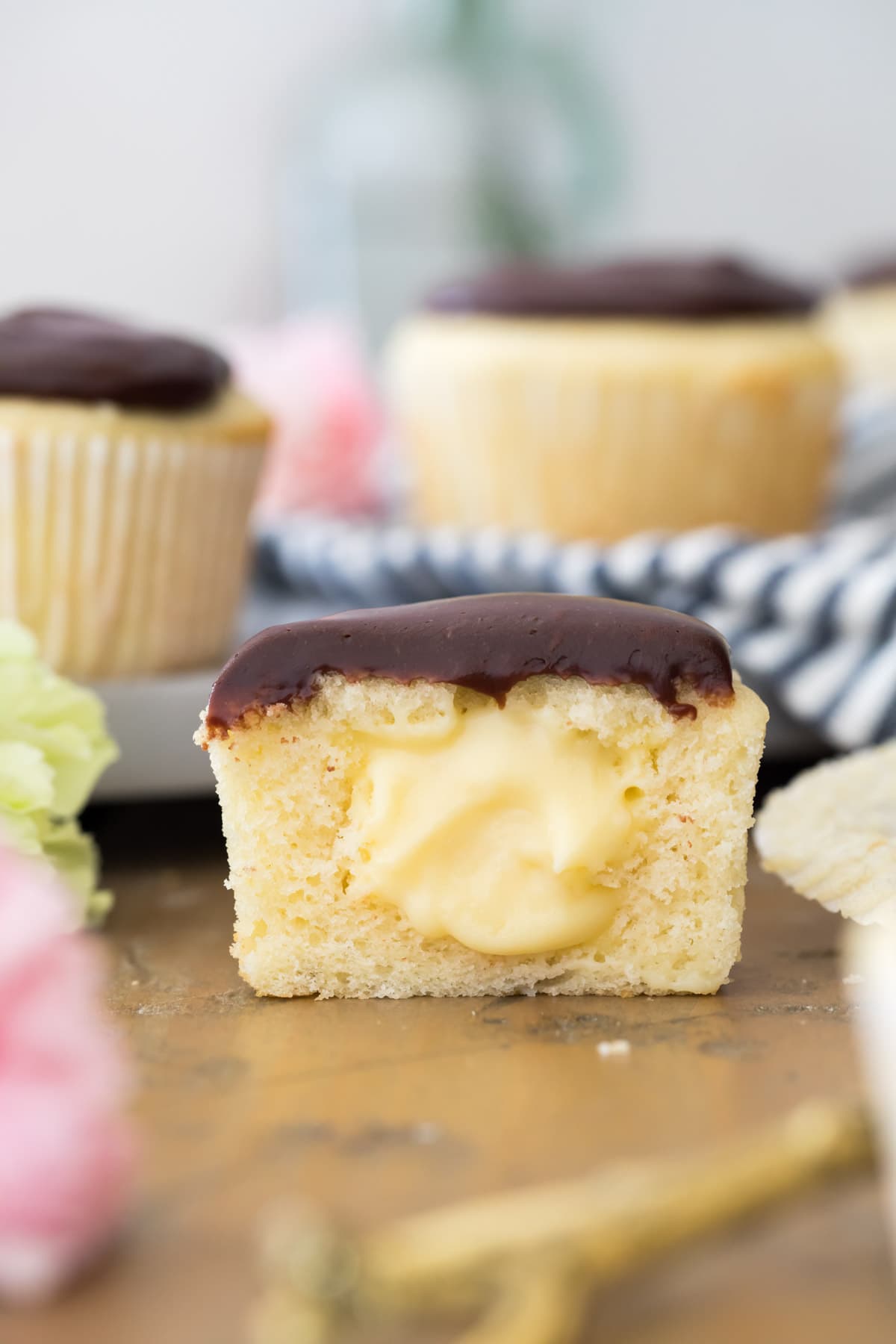 Let’s bake together! Be sure to check out my video in the recipe where I’ll show you exactly how I make these in my own kitchen! 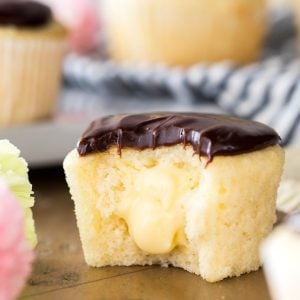 ¹You may substitute the milk and the cream for 2 cups of half and half. ²Save your egg whites to make meringue cookies! ³You may leave out the corn syrup, the frosting just won’t be quite as thick and glossy.