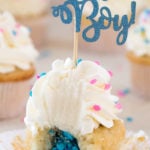 A sweet and simple recipe for adorable Gender Reveal Cupcakes! This recipe makes soft but sturdy vanilla cupcakes that you can fill with either pink or blue sprinkles for a fun gender reveal! Recipe includes a video tutorial! 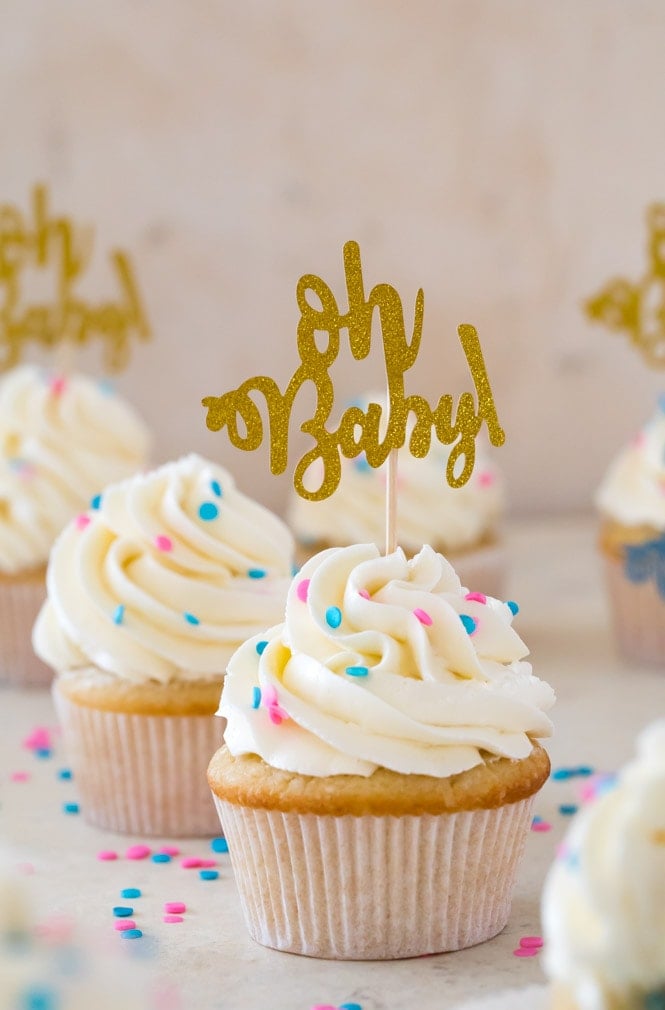 Life lately has been hectic. Time is flying, I’m getting bigger every day (and so is baby!) and I can’t believe we have less than two months to go.

Zach and I found out the baby’s gender right after the ultrasound technician did. We were both dying to know and couldn’t even imagine waiting until the baby was born (those of you who have that kind of self-control and patience… I don’t know how you do it).

We didn’t do any kind of special gender reveal for friends or family, and we didn’t have a party. We called and texted family members on our way home from the appointment, so it was a pretty low-key sort of “reveal”.

Still, I’ve had this idea to make my piñata cupcakes into a gender reveal cupcakes for a while and couldn’t pass up the opportunity for a sweet gender reveal on the blog today.

Believe it or not (because I couldn’t believe it at first), we are having a… 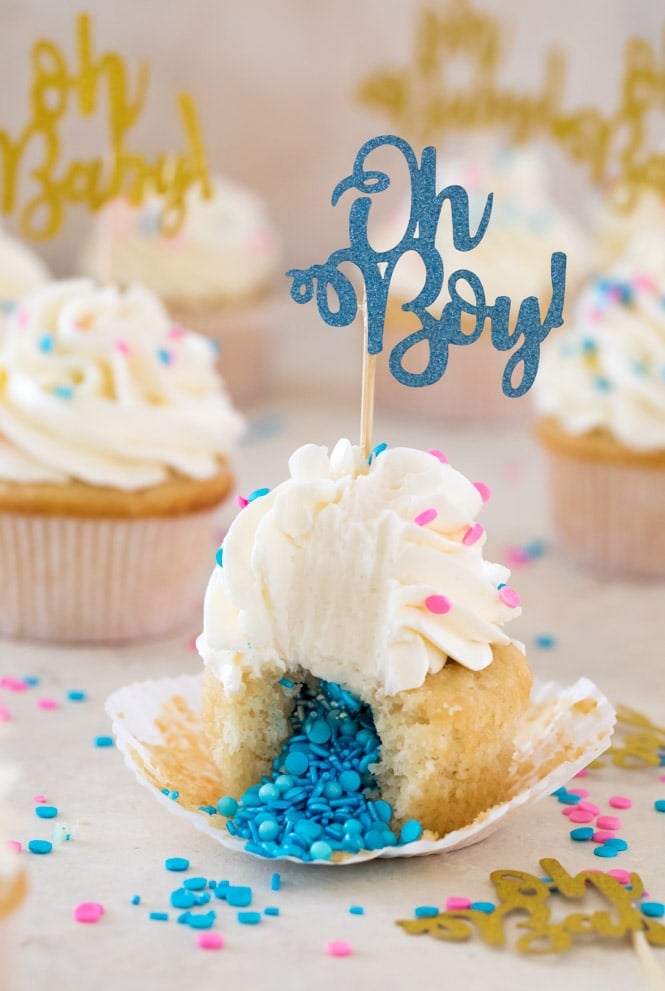 Baby boy should be here before Thanksgiving and Zach and I are both so excited for his arrival.

There’s so much left to do before he gets here! We haven’t even bought a crib yet and the nursery is fairly… unassembled, for lack of a better word.

As for the blog, I’ll continue to post once he arrives but I’ve been working very hard to get ahead on recipes so that I can have a few posts scheduled out and take a little bit of a “maternity leave” when he’s born. It’s been fun, but also a little strange jumping into fall and winter recipes while it’s still summertime. I decorated Christmas cookies yesterday and it was 80 degrees (I’ll share them with you on Instagram later today)! 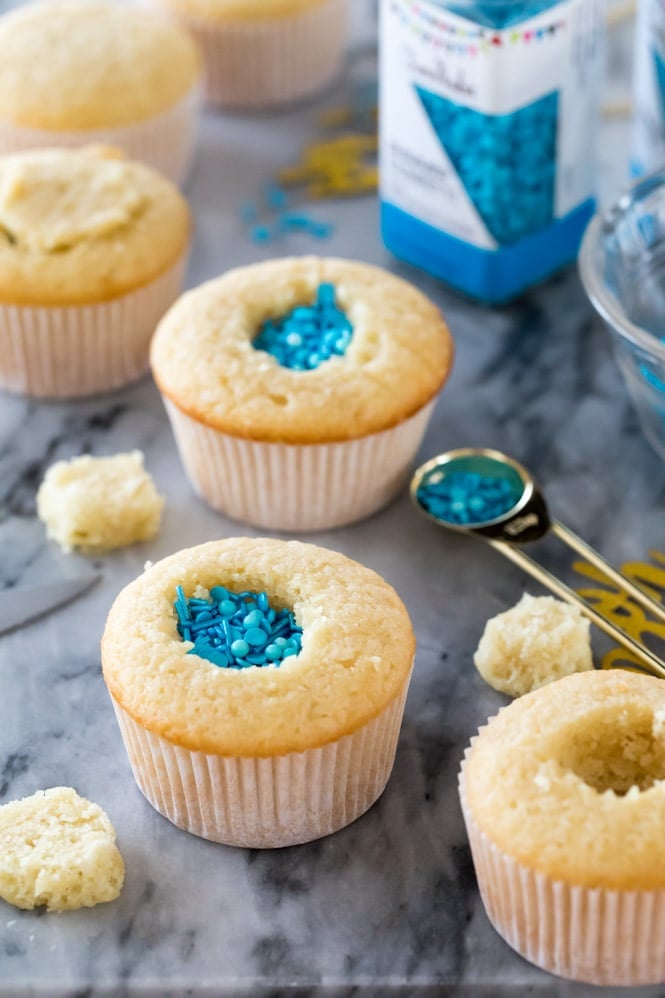 There are a lot of gender reveal cupcake ideas out there, but none that I felt were quite as fun as these (OK, I might be biased). These aren’t just fun, though, they’re also simple to make: just bake cupcakes, carve a hole in the center, and fill with sprinkles!

They might be a bit messier to bite into than some other frosting-filled or colored-cake-filled cupcakes out there, but that’s part of the fun of them. The sprinkles are a fun and colorful surprise, and the reveal is pretty unmistakable!

While I have quite a few existing cupcake recipes on the blog, I developed this one specifically for this recipe. I wanted a cupcake that was sturdier and denser than some of the others on my site, but still extremely soft, flavorful, and moist. Using egg whites that have been whipped to stiff peaks and sour cream helps make this tightly-crumbed but not at all dry cupcake possible.

This cupcake is perfect for carving into, which is exactly the point since we’ll be carving little nests into our cupcakes to hide our sprinkles (see photo above).

I topped these cupcakes off with my Swiss Meringue Buttercream from Monday, but included some of my other favorite frosting options in the recipe. 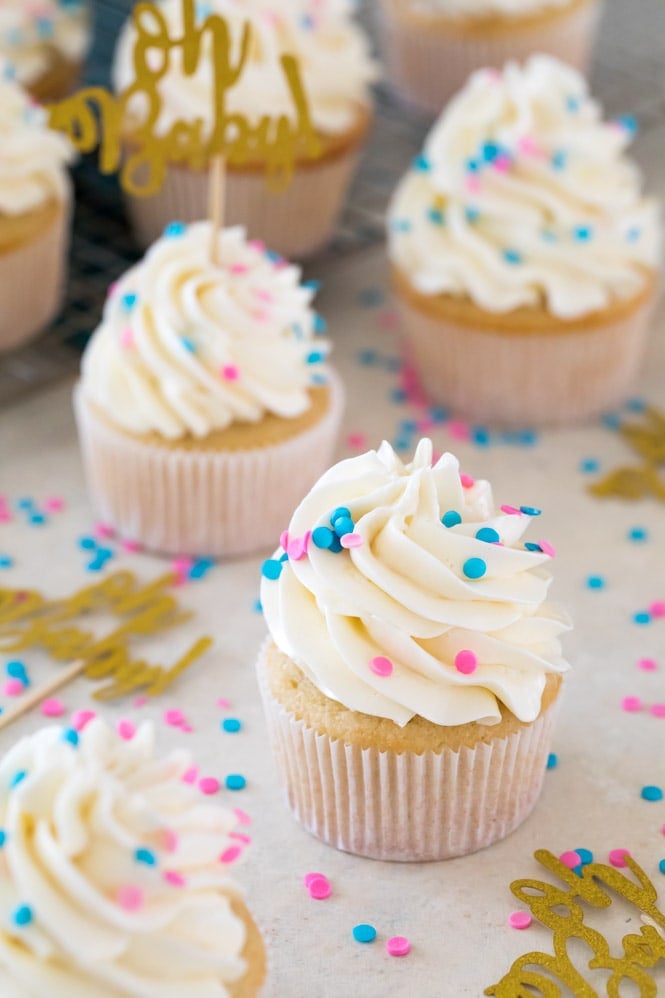 Thank you so much for letting me share the news about our baby boy with you. Maybe it’s the pregnancy hormones (probably not) but I’m just so, incredibly, overwhelmingly, grateful to every one of you reading today. Thanks for letting me share not just sweet recipes but these other sweet parts of my life 💙 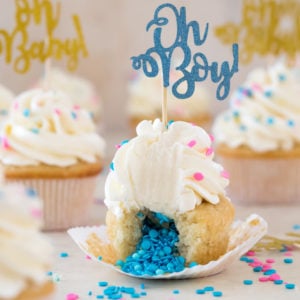 A sweet and simple recipe for Gender Reveal Cupcakes! Fill them with either pink or blue sprinkles for a fun surprise reveal! This recipe can be doubled.Be sure to check out the how-to VIDEO below the recipe!
5 from 7 votes
Print Pin Rate
Course: Dessert
Cuisine: American
Prep Time: 20 minutes
Cook Time: 18 minutes
Total Time: 38 minutes
Servings: 12 cupcakes
Calories: 262kcal
Author: Sam Merritt

¹This will take several minutes. “Stiff peaks” simply means that the egg whites will have increased in volume and if you pull the (turned off) beater straight out of the mixture the peak that forms in the egg whites will hold its shape and not fold over or fall back in on itself, see video for a visual. 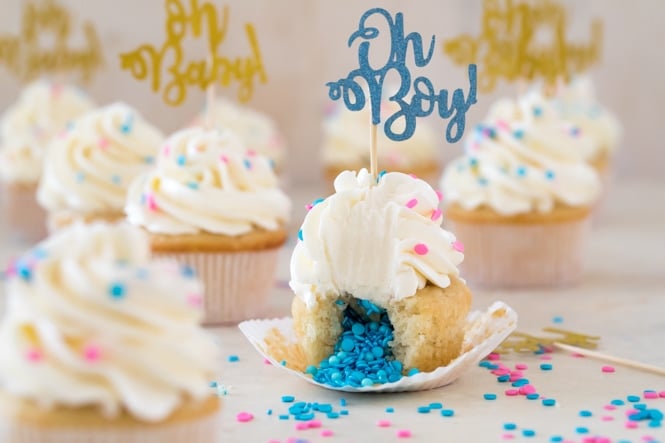