×
You are here: Home / Desserts / Pies / The Best EASY Pie Crust Recipe
This post may contain affiliate links. As an Amazon Associate I earn from qualifying purchases. Please read my disclosure policy.
Jump to Recipe Jump to Video Print Recipe 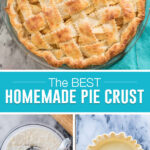 This is the only Pie Crust Recipe you’ll ever need! Buttery, flaky, and foolproof, my easy homemade recipe is perfect every single time, thanks to a key secret ingredient. This recipe comes together quickly in the food processor, so you can have a perfect pie dough chilling in your refrigerator in a matter of minutes. Watch the how-to video for step-by-step instructions!

We have officially entered into pie season, and I couldn’t be more excited about it! Apple pie is of course one of my favorites, but I’ll pretty much take a piece of whatever’s being served, especially if it’s made with my homemade pie crust.

I originally published this recipe several years ago, and since then I’ve always felt I needed just a tad more dough, especially if I wanted to do a decorative edge. To solve this, I’ve slightly scaled up the recipe so there’s plenty of dough to work with. It’s still the same easy, foolproof pie crust recipe that you’ve all loved over these past few years, but now there’s just more of it!

My simple pie dough works perfectly for blind baked pies (more on that coming soon!), and it can easily be doubled for two-crust pies or a lattice pie crust. Preparing the dough is a breeze, thanks to the help of a food processor, and it bakes up to be extra flaky and tender, extra buttery and extra flavorful.

All that “extra” comes from a surprising secret ingredient…more on that below.

You don’t need anything fancy or complicated to make my homemade pie crust recipe–just five common ingredients you probably already have:

SAM’S TIP: That’s right, you don’t need ice water to make my pie crust recipe! I use an exact amount of sour cream instead. No more guessing how much ice water to use or worrying if your water is cold enough.

How to Make Homemade Pie Crust

SAM’S TIP: Making a pumpkin pie or a chocolate pie? You’ll need a blind-baked crust! While I share some notes on blind-baking in this recipe, I will be sharing an entire post dedicated to blind-baking very soon. Stay tuned!

Can I make this pie crust recipe without a food processor?

If you don’t have a food processor, you can use a pastry blender, knife, or a grater to cut your butter into your dough.

I highly recommend investing in a food processor though–it will make your baking so much easier and less messy!

Can I freeze homemade pie crust?

Yes! Just make sure your pie dough is tightly wrapped before freezing. It will keep for several months in the freezer. When you’re ready, let it thaw overnight in the fridge before using.

Why do you use sour cream in your homemade pie crust?

I know it seems like an unusual pastry ingredient, but I’ve found that sour cream yields an exceptionally tender, flaky crust. Plus, using sour cream means this pie crust recipe is much easier and less fussy to make than many traditional recipes. Worried about the flavor? Don’t! Sour cream adds flavor without making your crust taste like sour cream.

If you don’t have sour cream, you can use full-fat Greek yogurt. But I highly suggest using sour cream. 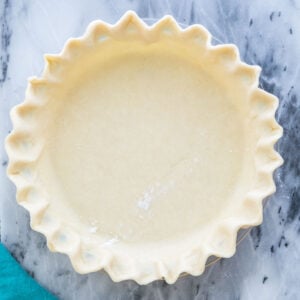 This is the only pie crust recipe you'll ever need! Buttery, flaky, and foolproof, this recipe comes together quickly in the food processor, so you can have a perfect pie dough chilling in your refrigerator in a matter of minutes.Makes enough for one 9”-10” pie plate. This recipe makes a single pie dough, for a double crust, simply double the recipe.Don't forget to watch the how-to video!
4.93 from 78 votes
Print Pin Rate
Course: pie
Cuisine: American
Prep Time: 15 minutes
Chiling Time: 45 minutes
Total Time: 1 hour
Servings: 1 pie crust
Calories: 1514kcal
Author: Sam Merritt

Full-fat sour cream is your best bet for this recipe, but in a pinch you could substitute full-fat plain Greek yogurt.

Making without a food processor:

I highly recommend a food processor for this recipe, it makes quick work out of the dough without being an arm workout! However, if you do not have a food processor you may use a pastry cutter, grater, or even a knife to cut the butter into the flour mixture before stirring in the sour cream.

To blind bake this pie crust (that is, bake it completely without any filling so it can be cooled and filled with a filling that does not need to be baked), allow the pie dough to chill for at least 45 minutes as instructed. Roll out and arrange in your pie plate, then place it in the freezer for at least 20 minutes while you preheat your oven to 375F. Once oven is preheated, line crust with parchment paper and fill with pie weights. Place on a baking sheet and transfer to 375F oven to bake for 15 minutes, carefully remove from oven and remove parchment and pie weights, then return to the oven and continue to bake until beginning to turn golden brown, about 10 additional minutes.

This pie dough may be made up to 5 days in advance of rolling out and using. Store tightly wrapped in the refrigerator. If chilling for this long, you will likely need to let the dough soften on the counter at room temperature for 15 minutes or possibly longer to make it soft enough to roll without cracking.

This pie dough may be frozen and will keep for several months in the freezer if tightly wrapped. To use, thaw overnight in the refrigerator and then use as desired.

I originally published this recipe several years ago, but since then I’ve come to feel that it would be nice to have just a tad more dough, especially if I wanted to do a decorative edge. To solve this I’ve slightly scaled up the recipe so that you have plenty to work with. Essentially, the recipe is unchanged, I’ve just scaled each of the ingredients up a bit proportionately so there’s more pie dough!