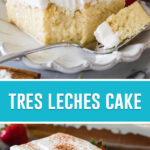 My Tres Leches Cake is designed to be soft, perfectly moist, and NOT soggy! It’s made with a homemade vanilla cake soaked in three milks and topped with whipped cream. You’ll be amazed at how incredible this tastes! Recipe includes a how-to video.

Tres leches cake or “Three Milks” cake should be soft, moist, and super flavorful. My recipe checks every box, with a fluffy vanilla sponge cake soaked in three different types of milk and topped with whipped cream. With all that liquid, it’s easy to assume this cake would be soggy–but don’t worry, my recipe has been tested and perfected to be perfectly balanced and NOT soggy!

This is a cake that took me a long time to get just right. Because we’ll be drenching it with a mixture of milks, the base of this cake is critical (and is what took me the longest to perfect).

It needs to be light and airy, but sturdy enough that it doesn’t become a soupy mess. Pound cake is too dense, and classic vanilla cake disintegrates. Ultimately, a variation of my grandmother’s hot milk cake did the trick, and while the cake ingredients are almost identical, you’ll notice the technique is quite different (as is the resulting cake!). You’re going to love it!

Here are the key ingredients in my recipe. Some of them may surprise you!

SAM’S TIP: I like to top off my cake with a sprinkle of cinnamon (freshly ground, if you have it!), but this is optional.

How to Make It

SAM’S TIP: If you’ve never whipped egg whites to stiff peaks before, it simply means that the egg whites don’t fold over or fall back into themselves when you pull your whisk straight out of the mixture. If you’ve made my meringues or white cake you’ve done this before! For a visual, check out my video below.

With most of my cakes I encourage you to play around with different frostings on top, but not so with today’s recipe. You need something light that pairs well with the milks-drenched cake and the whipped cream frosting is a classic for a reason!

Where is tres leches cake from?

The true origins of this cake are actually widely disputed. Many Latin American countries have been named as possible points of origin, and some sources even cite Nestle as perpetuating this milk-heavy recipe as a way to sell more of their condensed and evaporated milk (a delicious marketing ploy, if you ask me).

Here’s an article that discusses the origins of tres leches cake if you’re a fellow food nerd like me and would like to take a deep dive!

Can I freeze tres leches cake?

Kind of. I don’t recommend freezing the cake after you’ve soaked it in the milk mixture. However, if you’d like to make this cake in advance you can bake the cake, cool it completely, and then tightly wrap it and freeze as you would any other cake.

Several hours to 1 day before you are ready to serve, thaw the cake and then follow the instructions in the recipe for drenching with milk and topping with whipped cream.

What are the 3 kinds of milk in tres leches?

Traditionally this cake is made with evaporated milk, sweetened condensed milk, and whole milk. However, I found that using whole milk tends to make the cake a bit more soggy than is desirable, so for my tres leches cake recipe I use heavy cream instead.

This cake would be a great dessert after enjoying some taco salad or chips and queso! 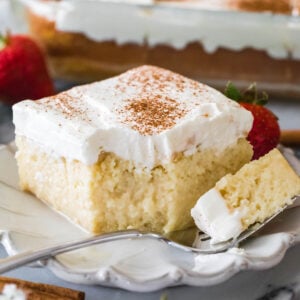 Stiff peaks simply means that if you lift the beater straight out of the batter, the peak that forms will not recede back or melt back into itself. It should hold a tall, stiff peak, and if you turn the beater upside down the peak that has formed on the end of it should hold its shape as well. See photo in post or video for visual!

Store Tres Leches cake covered in the refrigerator for up to 3 days.

Recipe originally published September 2019, it has been updated to include more information but the recipe is unchanged.