×
You are here: Home / Breakfast / The BEST Coffee Cake Recipe
This post may contain affiliate links. As an Amazon Associate I earn from qualifying purchases. Please read my disclosure policy.
Jump to Recipe Jump to Video Print Recipe 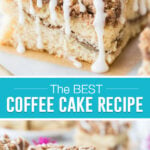 My deliriously soft coffee cake has a surprise ripple of cinnamon in the middle and a super simple streusel topping. This recipe takes just 30 minutes to prep and makes enough to feed a crowd (if you’re willing to share!). Recipe includes a how-to video!

The Only Coffee Cake Recipe Worth Making Again

Bold claim up there 👆🏻 I know. But I stand by it 100%. Ever since developing this moist coffee cake recipe almost five years ago, I have yet to find another that measures up.

Maybe it’s that soft, sweet (but not too-sweet) crumb, or the ribbon of cinnamon tucked away in the center. Maybe it’s that buttery blanket of streusel on the top, or the simple drizzle of vanilla glaze. Whatever it is, I’m hooked, and I know you will be too!

Serve this one up at your next special occasion or brunch (scones or French toast casserole are always a hit, too!), and just sit back and watch your guest’s eyes roll to the back of their heads with their first bite. Or just make it for dessert tonight, because Thursday’s are worth celebrating, too!

Why You’ll Love My Recipe:

I’m not going to go over every ingredient on this list, but there are a few important ones worth a mention:

SAM’S TIP: This batter will be thicker than what you’re used to, and that’s exactly as it should be. Because of this, when you layer your cinnamon sugar swirl in the center, the top layer can be a bit tricky to spread. You can try to smooth it over the surface like I suggest in the recipe, or you can just use a knife and swirl it into the cinnamon and sugar.

How to Make Coffee Cake

SAM’S TIP: While overmixing isn’t as much of a concern with this recipe, overbaking is definitely possible. If your cake turns out dense or dry, it was probably baked for a few minutes too long. Keep a close eye on your cake to make sure this doesn’t happen to you!

Does coffee cake have coffee in it?

Coffee cake (at least in America, though I know this is the case in other countries as well) doesn’t get its name because it contains coffee; rather, the name refers to a cake that is often served with coffee. While technically any cake you serve with coffee could fit the bill, coffee cake as I know it should always have a buttery-soft crumb and lots of streusel, just like today’s recipe.

Can I bake this cake in a bundt pan?

Yes! Readers have reported this cake takes about 55 minutes to bake in a bundt pan. I do also have a classic vanilla bundt cake recipe.

How should coffee cake be stored?

This recipe yields a wonderfully moist, tender crumb that stays soft for days. To keep it tasting fresh, I recommend you store it in an airtight container at room temperature and enjoy within 3 days. While I haven’t frozen this cake, I don’t see any reason why it wouldn’t do well in the freezer (do not refrigerate it though, or it will dry out!).

Are coffee cake and crumb cake the same?

Not quite! Crumb cake has a much thicker crumb topping with less cinnamon, and it lacks the cinnamon ripple that I add to the middle of my coffee cake. Both are equally delicious and go great with a cup of coffee though!

Serve yourself a slice (with or without coffee!) and admire just how beautiful a simple breakfast cake can really be ❤ 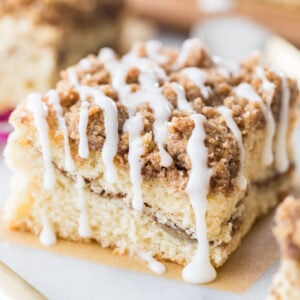 Store leftover coffee cake in an airtight container at room temperature for up to 3 days.

Originally published April 10th, 2017. Post updated to include more details and information and a video February 2020. Recipe remains the same, it was perfect as-is!