×
You are here: Home / Breakfast / 1 Hour Cinnamon Rolls
This post may contain affiliate links. As an Amazon Associate I earn from qualifying purchases. Please read my disclosure policy.
Jump to Recipe Jump to Video Print Recipe 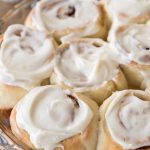 A quick yeast-made Cinnamon roll recipe (with a “secret ingredient”). These soft, fluffy, cinnamon rolls are loaded with gooey cinnamon-y interiors and topped off with a simple cream cheese frosting. Less than an hour needed to rise! Recipe includes a how-to video at the bottom of the post!

We love enjoying these cinnamon rolls any time of the day, but they make an especially indulgent breakfast option. Just like my buttermilk pancakes, and sausage gravy, having my favorite cinnamon roll recipe on the Christmas morning breakfast table is non-negotiable. 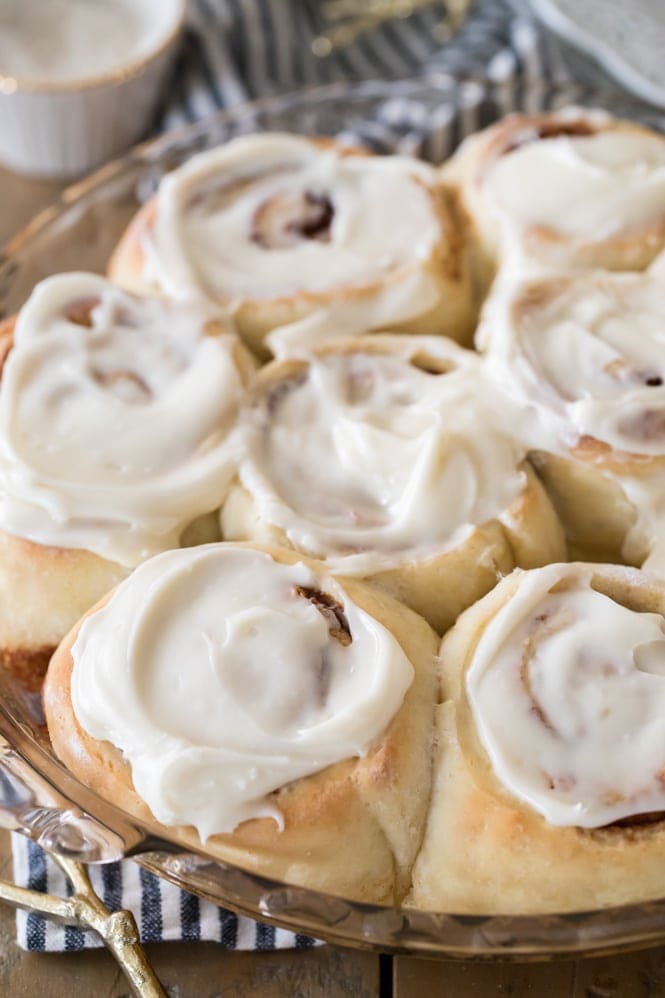 Whew, we made it through a whole week of candy recipes. I don’t know about you but I am exhausted. Hopefully by now you are ready for something a little different, and I’m pretty excited to be sharing this well-tested recipe for fluffy, perfect cinnamon rolls!

In the past, my most popular cinnamon roll recipe was a yeast-free version. While I still love that one for how simple and quick it is, I’ve been working on overcoming my long-running aversion to working with yeast. I started earlier this year with my easy pizza dough and then threw myself into developing a true, yeast-y cinnamon roll recipe.

Because yeast recipes are a newer territory for me, I had to make sure this recipe worked inside and outside of my kitchen. I had many, many fails (maybe you saw them on my Instagram stories), and when I finally landed on this recipe I was almost shocked by how incredibly perfect it was. The first bite was light and fluffy, the centers were just perfectly gooey, the taste was everything you could ever want in a cinnamon roll.

I then proceeded to test this recipe 5 more times just to be sure and  even made my mom try it at home in her own kitchen. This cinnamon roll recipe is a winner. 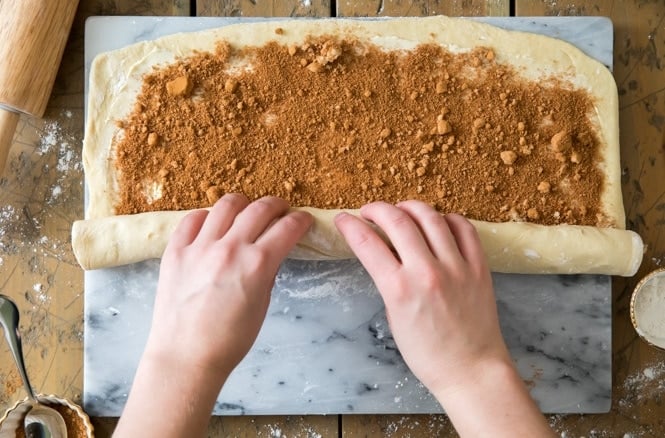 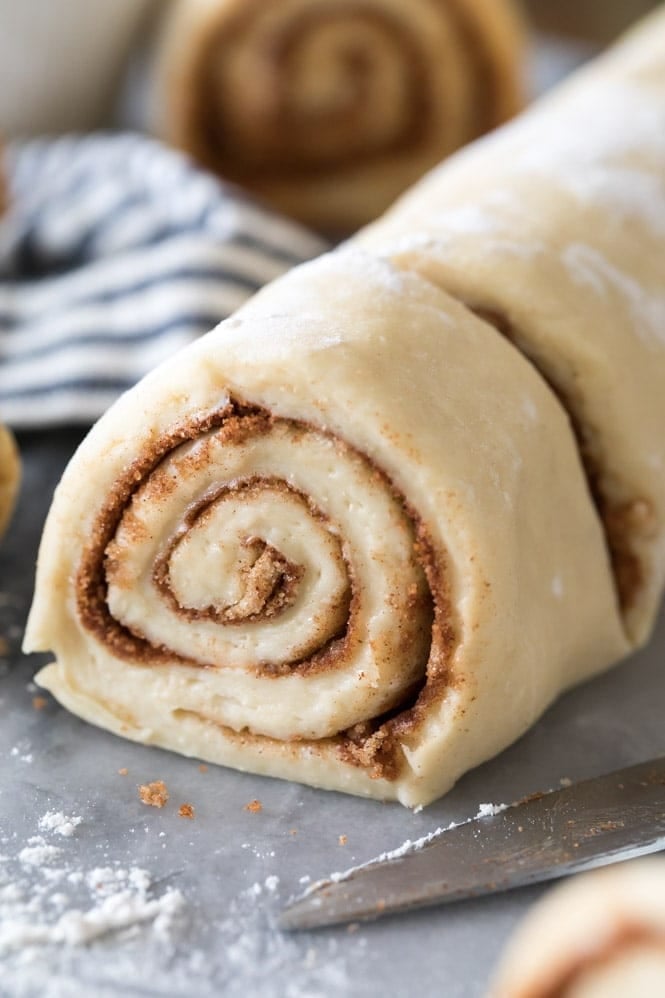 When you read through the recipe, you’ll notice that I use cornstarch. Cornstarch has been my “secret ingredient” in so many of my recipes (most popularly my chocolate chip cookies) that I can hardly call it a secret anymore. After dozens of recipe fails where I couldn’t manage to achieve the perfect fluffy texture I wanted in my cinnamon rolls, I decided to try adding it to my cinnamon rolls.

Bingo. Once I added the cornstarch, recipe development finally started to move in the right direction. The cornstarch gives these cinnamon rolls a softer texture, helping to give you a tender, light and fluffy roll.

You’ll notice in the recipe that these cinnamon rolls call for a range of flour and there isn’t a specified amount of kneading time listed. This is because the specifics will vary in every kitchen, and the best way to know your dough is right is by watching and feeling it.

Your cinnamon roll dough should cling together and form a ball that pulls away from the sides of your mixer bowl. Most likely you’ll need to add more flour to achieve this, but you also don’t want to add too much or you’ll end up with dense and dry cinnamon rolls. I call for up to ⅓ cup in the recipe, but you may need even more, or even less! Add additional flour slowly until it’s clinging together but still slightly tacky to the touch. Watching my video is a good visual if you’ve never made cinnamon rolls before or have any questions about what your dough should look like.

You also don’t need to knead (haha) the dough for a certain amount of time. Some recipes call for 5 minutes of kneading or 10 minutes etc., but all mixers vary so, again, we are going by feel. Over-working this dough can make your cinnamon rolls tough, so once the correct texture is reached, your dough is good to go. 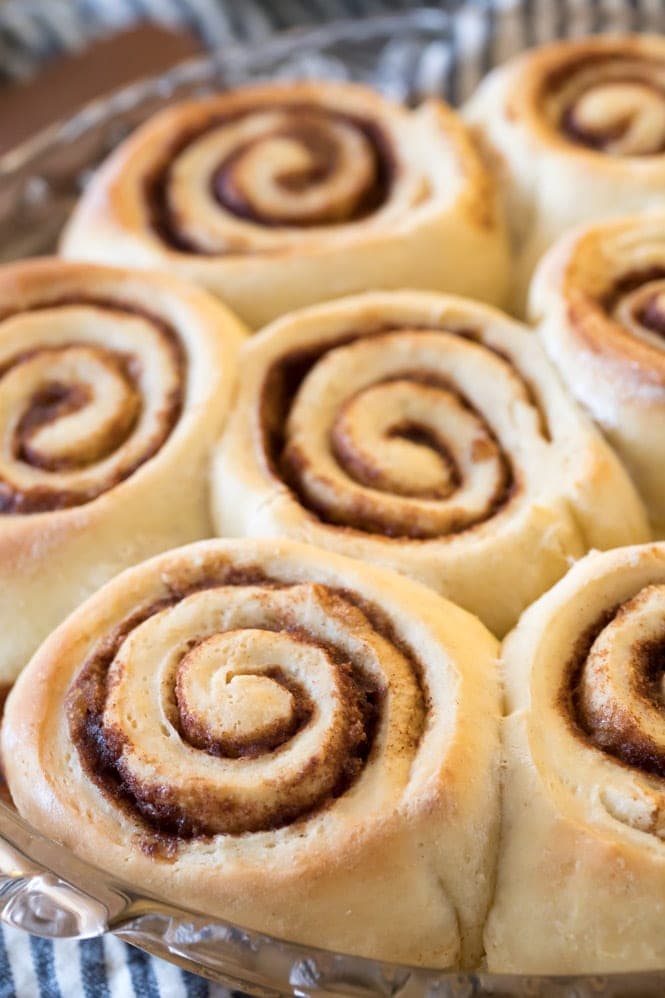 Can I make these Cinnamon Rolls in Advance?

Unfortunately, I found that the quality of the cinnamon rolls degraded after the dough sat for a night in my fridge. For best results, I recommend using the dough as soon as you make it (and it’s had time to rest properly, as per the instructions).

However, I have found that they keep their fluffy texture and soft interiors when stored after baking. I store mine in an airtight container at room temperature. Enjoy within 2 days of baking, and I definitely recommend reheating them before eating. Just popping one in the microwave for a few seconds is sufficient! 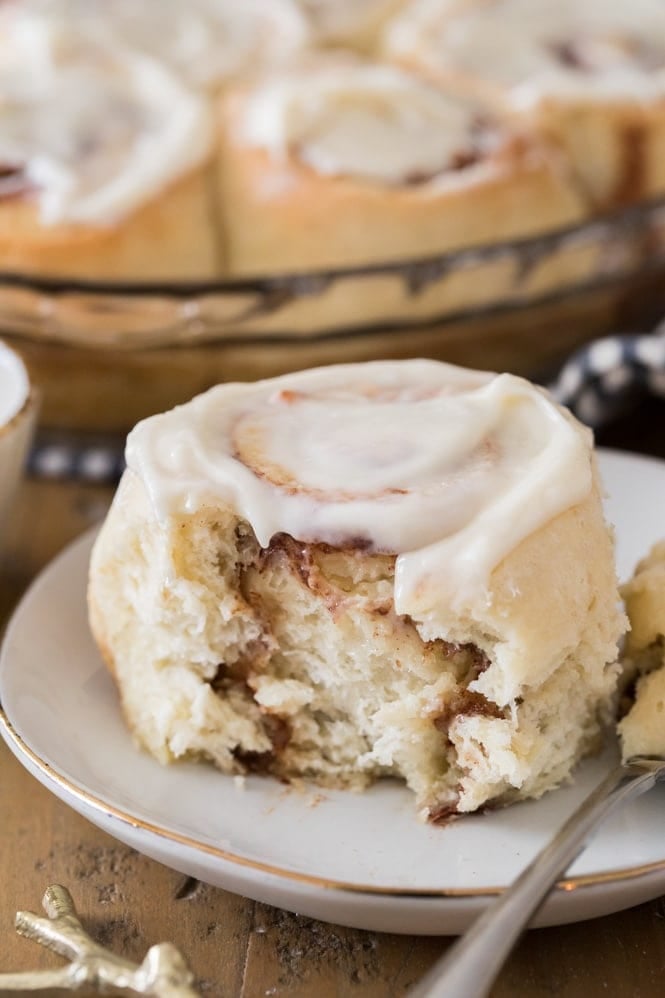 I am so excited to hear what you think of these cinnamon rolls once you try them for yourself! Please leave me a comment, tag me on Instagram, or share a pic in my free Facebook Baker’s Club!

Other Breakfast Recipes You May Enjoy

How do You Make the Best Cinnamon Rolls? 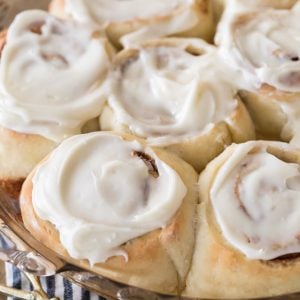 Soft fluffy cinnamon rolls ready in under an hour!
Be sure to check out the tips in the blog post above, and the how-to VIDEO at the bottom of the recipe!
5 from 54 votes
Print Pin Rate
Course: Breakfast
Cuisine: American
Prep Time: 40 minutes
Cook Time: 20 minutes
Total Time: 1 hour
Servings: 9 cinnamon rolls
Calories: 401kcal
Author: Sam Merritt

*This mixture can be heated in a microwave safe bowl in the microwave instead of on the stovetop, either way is fine so long as the butter is melted and the mixture is between 110-115°F.