×
You are here: Home / Desserts / Candy / How to Make Candied Pecans
This post may contain affiliate links. As an Amazon Associate I earn from qualifying purchases. Please read my disclosure policy.
Jump to Recipe Jump to Video Print Recipe 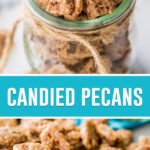 Making Candied Pecans at home is a lot simpler (and less expensive!) than you may think! You only need a few basic ingredients and just ten minutes to prep this sweet but perfectly spiced snack. Watch the how-to video in the recipe card for all of my tips and tricks!

This sweet treat always takes me right back to the carnivals and Amish markets of my childhood, where we’d pay top dollar for tubs of caramel corn and paper cones of sparkly, sugar coated pecans.

Little did I know that I could make those same treats at home for a fraction of the price (but in my defense, I was young, and they were really hard to resist).

My easy recipe is beautifully spiced with just the right amount of sweetness, and truly so very easy to make. Chances are, you already have all the ingredients you need in your pantry! Oh, and did I mention they make great gifts? Just wrap them up in a pretty jar or treat bag, tie it with a bow, and you’ve got a simple, but delicious homemade gift.

You only need a few basic ingredients to make homemade candied pecans:

SAM’S TIP: The allspice in this recipe is optional, but it does add a great flavor. I first became obsessed with the candied pecans sold at an Amish market near my house, and theirs are spiced with allspice, so I like to use it here. There is not a substitute spice that will give you quite the same flavor.

How to Make Candied Pecans

SAM’S TIP: Periodically stirring the nuts while they cook helps for even cooking, but also makes sure there are no wet egg white spots lurking under anything! Always make sure to spread everything back into one even layer when you’re done stirring.

Can you freeze candied pecans?

Yes! To freeze, allow the pecans to cool completely after baking, and then transfer them to an airtight container (a ziplock bag works well) where they will keep up to 2 months.

Can I use different nuts?

Yes! Feel free to substitute walnuts, cashews, or almonds instead of using the pecans called for (you would use the same amount of nuts as called for in the recipe). I also have shared a detailed tutorial on how to make candied walnuts!

Are glazed pecans the same as candied pecans?

While they’re similar, glazed pecans typically include some kind of syrup instead of an egg white. Because of this, they typically have a slightly different texture and flavor.

How long will candied pecans keep? 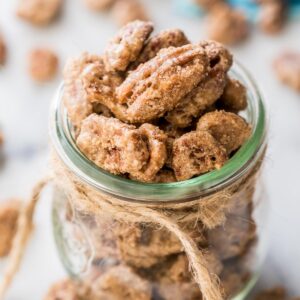 How to Make Candied Pecans

Allspice is optional but the candied pecans that I usually buy from the Amish markets use it and it adds a nice extra touch. I typically use a heaping ¼ teaspoon.

Lining your baking pan with parchment paper makes cleanup easier, but it does make it more difficult to stir the pecans. If you don’t have any parchment or prefer not to use it, you can simply bake the pecans directly on an ungreased baking sheet.