×
You are here: Home / Breads / Apple Cinnamon Rolls
This post may contain affiliate links. As an Amazon Associate I earn from qualifying purchases. Please read my disclosure policy.
Jump to Recipe Jump to Video Print Recipe 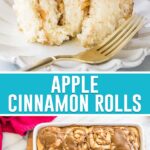 My Apple Cinnamon Rolls recipe features soft, plush buns swirled with apples and spices. An easy-to-make caramel glaze takes these rolls over the top, making them a stellar choice for breakfast or dessert. This recipe can be made with or without a mixer–watch the how-to video below for instructions!

Soft, Spiced, and Just the Right Amount of Sweet

Fall officially started yesterday, and I’m so excited to be sharing my latest apple recipe: apple cinnamon rolls! Unlike other cinnamon roll recipes, my apple cinnamon rolls are sweet, but not overwhelmingly so. Each bite balances the subtle tartness of the apples with the warm cinnamon filling, and it all comes together with a decadent caramel glaze. These are so cozy and absolutely perfect for fall!

I know yeast breads can be intimidating, so let me reassure you: this recipe isn’t overly complicated. It can be made with or without a mixer, and the bulk of the time involved is just letting the dough rise, which only requires patience on your part. 😊

My apple cinnamon roll recipe starts out with the same enriched, fluffy dough I use in my sticky buns and sweet bread. You’ll activate your yeast, form your dough, knead it for a few minutes, and then let it rise. From there things are pretty straightforward: roll out your dough, add your filling, roll into a log and slice. You’ll let the rolls rise one more time before baking and topping with the glaze.

Let’s get into it!

The key to soft, tender cinnamon rolls is an enriched dough (dough that has a high percentage of fat). We’ll fill that dough with apples, sugar, and spices before baking and drizzling with a super simple caramel glaze.

SAM’S TIP:  I highly recommend making my simple and sweet caramel glaze for a caramel apple flavor, but if you prefer a traditional frosting, you can always substitute the caramel glaze with the frosting I use for my 1-hour cinnamon rolls, or just use my cream cheese frosting.

How to Make Apple Cinnamon Rolls

SAM’S TIP: Keep the apples and sugar separate until just before you’re ready to spread them over the dough. If you don’t, the mixture will become too liquidy and messy when you try to spread it over the dough.

SAM’S TIP:  Over-baking the rolls will make them dry and hard, so avoid this! If you have an instant read thermometer, look for a temperature of 190F (88C) in the thickest part of a roll. If you don’t have a thermometer, use a toothpick or sharp knife and pierce the thickest part of a center bun and peek inside; it shouldn’t be doughy/too gooey and should look cooked through. Dark metal pans will bake the buns faster, light-colored metal will be a bit slower, and glass or ceramic will take the longest of all.

Can I make these in advance?

You can make the dough in advance, but not the filling or glaze. The filling becomes very wet and can compromise the quality of the dough if allowed to sit for too long after assembly.
To prepare the dough in advance, place in a large bowl after kneading and then cover the bowl and refrigerate. Punch down after several hours then allow to continue to rise for up to 24 hours, then proceed with the recipe as written.

Can I add nuts to my apple cinnamon rolls?

Sure! I personally have tried this recipe using chopped walnuts and felt that they overpowered the apple flavor, but if you’d like you can try sprinkling them on top or adding them in the apple filling.

My dough is very sticky. Can I add more flour?

Your dough should be tacky, but if it becomes unmanageable, you can absolutely add more flour. Depending on your kitchen environment, you may need more or less four than I call for in this recipe, which is why I include a range for flour instead of a set amount. 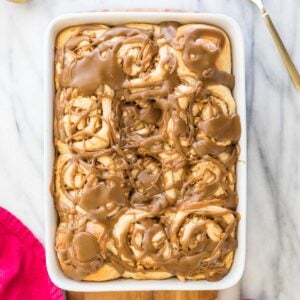 I prefer to use active dry yeast for best results but instant yeast may be substituted. To substitute instant yeast, combine instant yeast, sugar, salt, and half the flour and stir, then add warmed milk/water and stir well. Stir in butter and eggs and then remaining flour and proceed with the recipe as written. The dough will not need to rise as long when made this way.

I prefer and recommend whole milk for the most tender rolls possible, but you can substitute any milk you prefer.

Use an apple that you enjoy eating! While any apple will work, I personally feel that Granny Smith are a bit tart here and prefer to use Honeycrisp, Gala, or Fuji apples. Note that the smaller you cut your apple pieces, the easier they will be to roll up in the dough and the more tender they will be after cooking. Conversely, larger pieces of apples will make slightly messier rolls and crisper pieces after baking.

Store in an airtight container at room temperature for up to 3 days.