×
You are here: Home / Kitchen Tips / How to Use a Kitchen Scale
This post may contain affiliate links. As an Amazon Associate I earn from qualifying purchases. Please read my disclosure policy.
Jump to Recipe Jump to Video Print Recipe 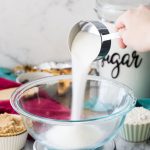 Level up your baking game! Learn how to use a kitchen scale to precisely measure all your ingredients for foolproof results every time! Step-by-step instructions plus a simple video included!

The Easiest Way to Improve Your Baked Goods

Somehow we’re already right in the midst of baking season. If you’re looking to up your baking game this year and make perfect cakes, cookies, and pies every time, one of the best suggestions I can give you is to start using a kitchen scale.

I’ve mentioned this before in my post on how to measure flour, but this was the biggest game-changer for me in my own kitchen (not to mention it’s critical when you’re developing your own recipes like I do).

However, if you live in the US (like I do), chances are you’re using measuring cups (and you may not even own a kitchen scale!). My goal is to change that. Every baker should use a scale whenever possible.

Tip: This is the kitchen scale that I use (affiliate).

Why Should I Use a Kitchen Scale?

Have you ever experienced:

These are just a handful of issues that bakers commonly encounter as a result of not measuring their ingredients precisely.

Using a scale takes the guesswork out of the baking process. It also eliminates the need for measuring cups (fewer dishes, yay!).

I love this country, but Americans are way behind on this as most of us don’t even own a kitchen scale. We all use measuring cups, but unfortunately a cup of flour or sugar measured in one baker’s kitchen is rarely precisely the same as a cup measured in another kitchen.

I’m not someone who loves change, so I get that it can seem a little intimidating to make the switch, but ever since I did (thanks to the persuasion of a German friend!) I can’t believe I didn’t make the switch sooner. Using a scale is not difficult, it reduces dishes, and it makes your desserts more likely to turn out perfectly. I can’t stress this enough: once you switch to using a scale, you’ll never want to go back. In fact, you’ll be annoyed when you encounter a recipe that doesn’t include weights.

OK, I get it! Now how do I Use a Kitchen Scale?

Alright, let’s get to it:

I linked to my favorite scale (affiliate) in the how-to card below. It’s accurate, the batteries last forever (mine have been working for years), and inexpensive! I think this one is around $12 on Amazon… comparable to the cost of a set of measuring cups!

For the past several years I have been testing and writing all of my recipes using weights, so wherever you see a weight measurement you can trust that it is precise and exactly what I’ve used in my own kitchen. I have standardized the measurements across my blog. These are the standards that I use for common ingredients: 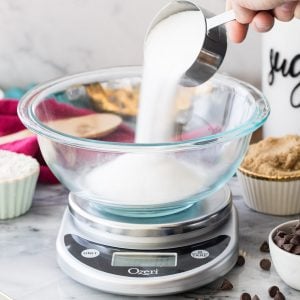 How to Use a Kitchen Scale