×
You are here: Home / Pastry / Palmiers
This post may contain affiliate links. As an Amazon Associate I earn from qualifying purchases. Please read my disclosure policy.
Jump to Recipe Jump to Video Print Recipe 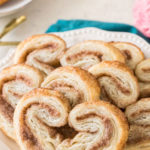 A recipe for buttery, flaky, cinnamon Palmiers! This recipe uses my homemade puff pastry so you can make the entire thing from scratch, but I also include notes for substituting store-bought pastry in case you’re in a hurry! 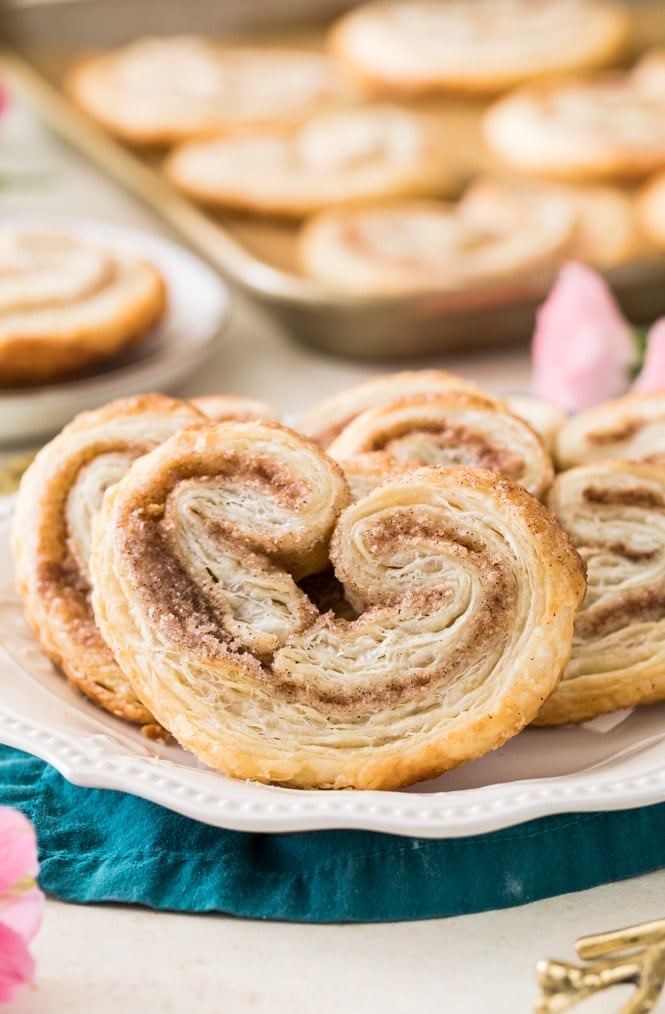 So, on Monday I gave you a recipe for homemade puff pastry. Now I owe you a recipe worth making with it! Today we’re making Palmiers.

They’re light, super flaky, and buttery, which won’t surprise you considering they’re primarily made out of our flaky, buttery homemade puff pastry that we learned how to make earlier this week. Slightly crisp, those beautiful, delicate layers shatter under your teeth and melt on your tongue. I make my palmiers by filling them with a blend of cinnamon and sugar, though some recipes use just granulated sugar. I’ve also included some savory filling options below.

Once you have your puff pastry prepped, palmiers are incredibly simple to make and only require a bit of rolling, brushing with butter, sprinkling with cinnamon/sugar, and folding. The hardest part is probably waiting for them to chill in the oven. Let’s get to it! 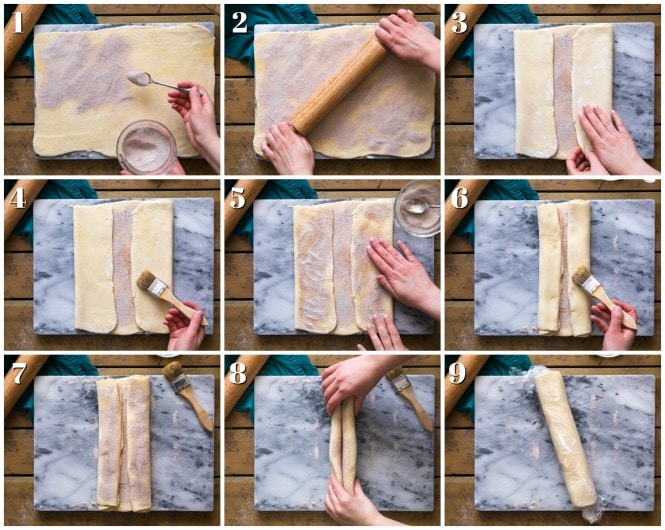 How to Make Palmiers

The steps listed below correspond to the numbered photos in the collage above. I don’t know about you but a visual usually really helps me in a way written instructions don’t. For more visual cues, check out my Palmier video below the recipe!

Don’t forget to repeat all the steps listed above with your second half of the puff pastry! 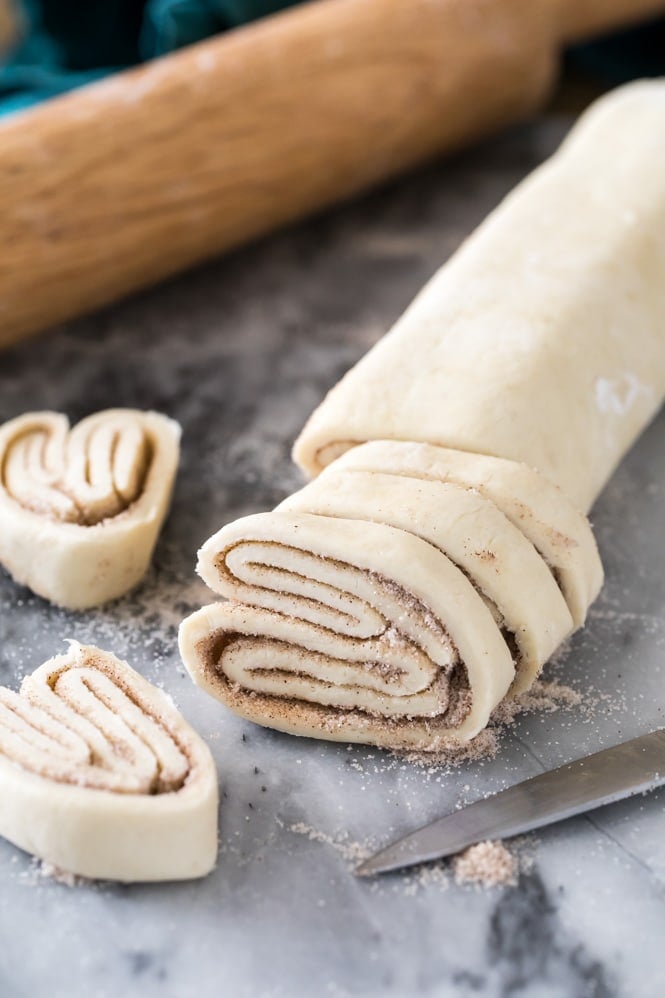 Chill, then bake on high heat

At this point you have your palmier dough ready, but letting it chill for one hour is critical. Palmiers need to be cold before going into the oven. Once the dough has chilled for about 30 minutes, you’ll want to start preheating your oven so that has reached temperature before the palmiers are ready to bake..

In order to encourage those nice flakey layers, puff pastry typically requires a hot oven, and this palmiers recipe is no exception. You’ll need to preheat your oven to 415F (215C) and this can take a long time to do. You want your oven to be nice and hot by the time you’re ready to slice and bake your palmiers.

Cold pastry and a hot oven is instrumental to nice flakey palmiers.

Once your oven is hot and your palmier log has chilled, use a sharp knife to cut into slices that are about ½″ thick and arrange them on a parchment paper lined cookie sheet. Give your palmiers some space, as they are going to spread in the oven quite a bit!

As you can probably tell from this recipe, I’m partial to cinnamon palmiers. The filling for these is made by simply whisking together granulated sugar and cinnamon and then sprinkling it over the dough as described above.

However, some traditional palmiers are made with just sugar (no cinnamon) and some recipes even use just brown sugar (or a mix of brown and white granulated sugar).

You can also make savory palmiers by skipping the sugar (and cinnamon) entirely and sprinkling cheese, garlic, bacon, prosciutto… the list goes on. 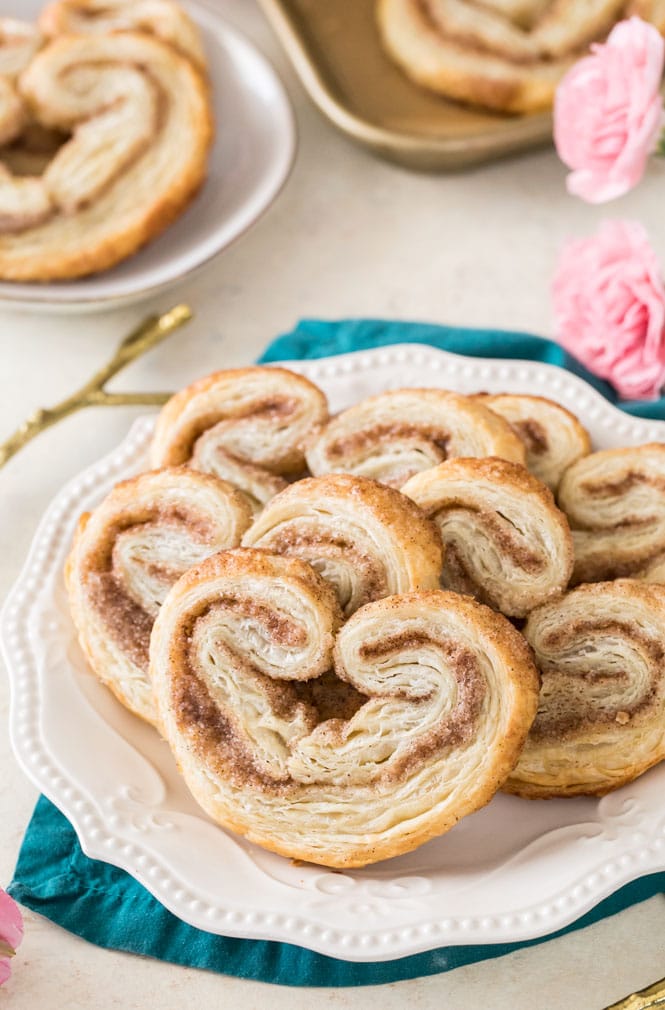 Let’s bake together! Head on over to my YouTube channel where I’ve already uploaded over 200 recipe videos that you can watch for free!

A recipe for buttery, flaky, cinnamon Palmiers! This recipe uses my homemade puff pastry so you can make the entire thing from scratch, but I also include instructions for substituting store-bought pastry in case you're in a hurry! Be sure to check out the how-to VIDEO below the recipe!
5 from 2 votes
Print Pin Rate
Course: Cookies, Dessert, pastry
Cuisine: American, French, middle eastern
Prep Time: 15 minutes
Chilling Time: 1 hour
Total Time: 1 hour 15 minutes
Servings: 35 cookies
Calories: 105kcal
Author: Sam Merritt

Palmiers will keep up to 3 days after baking if stored in an airtight container at room temperature.
This dough freezes well. To freeze, wrap well in plastic wrap and freeze for up to two weeks. Slice and bake from frozen (cookies may need an additional minute or so in the oven).

Tried this recipe? Show me on Instagram!Mention @SugarSpun_Sam or tag #sugarspunrun!
« How to Make Puff Pastry (the easy way)
The BEST Peanut Butter Cookies »