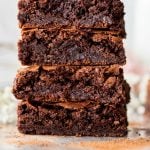 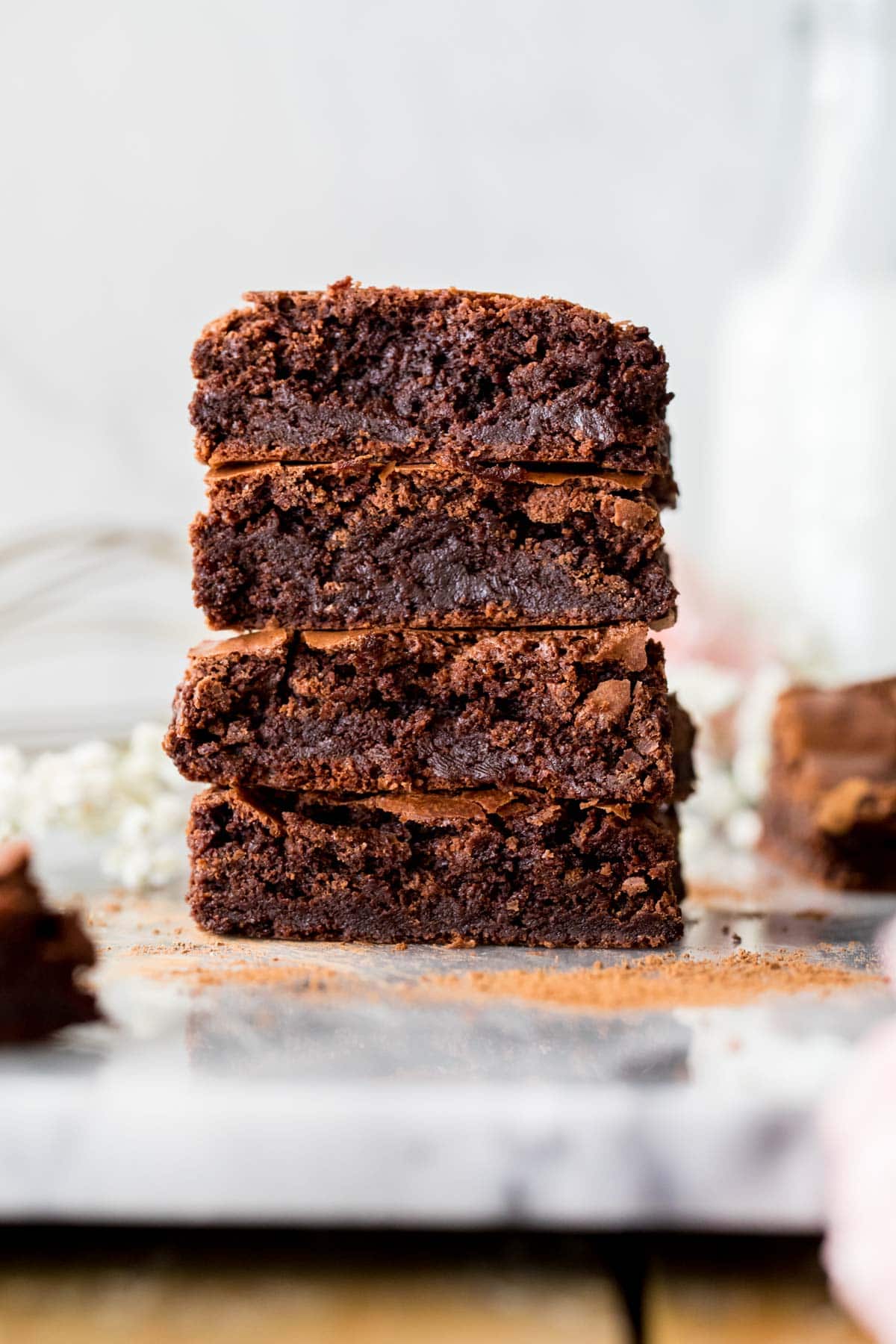 No flour? No problem.

Some of you have written and told me that you’re still having trouble finding flour in the grocery stores, so I thought I’d give you an alternative to making my flourless peanut butter cookies on repeat.

Today’s recipe is thinner but fudgier than my favorite brownie recipe. It’s richly chocolaty with crackly tops and a melt-in-your-mouth crumb.  They’re perfect for making in a pinch (or for a gluten free friend). Or for yourself anytime… even after spending days perfecting this recipe Zach is still asking me to make it just because. 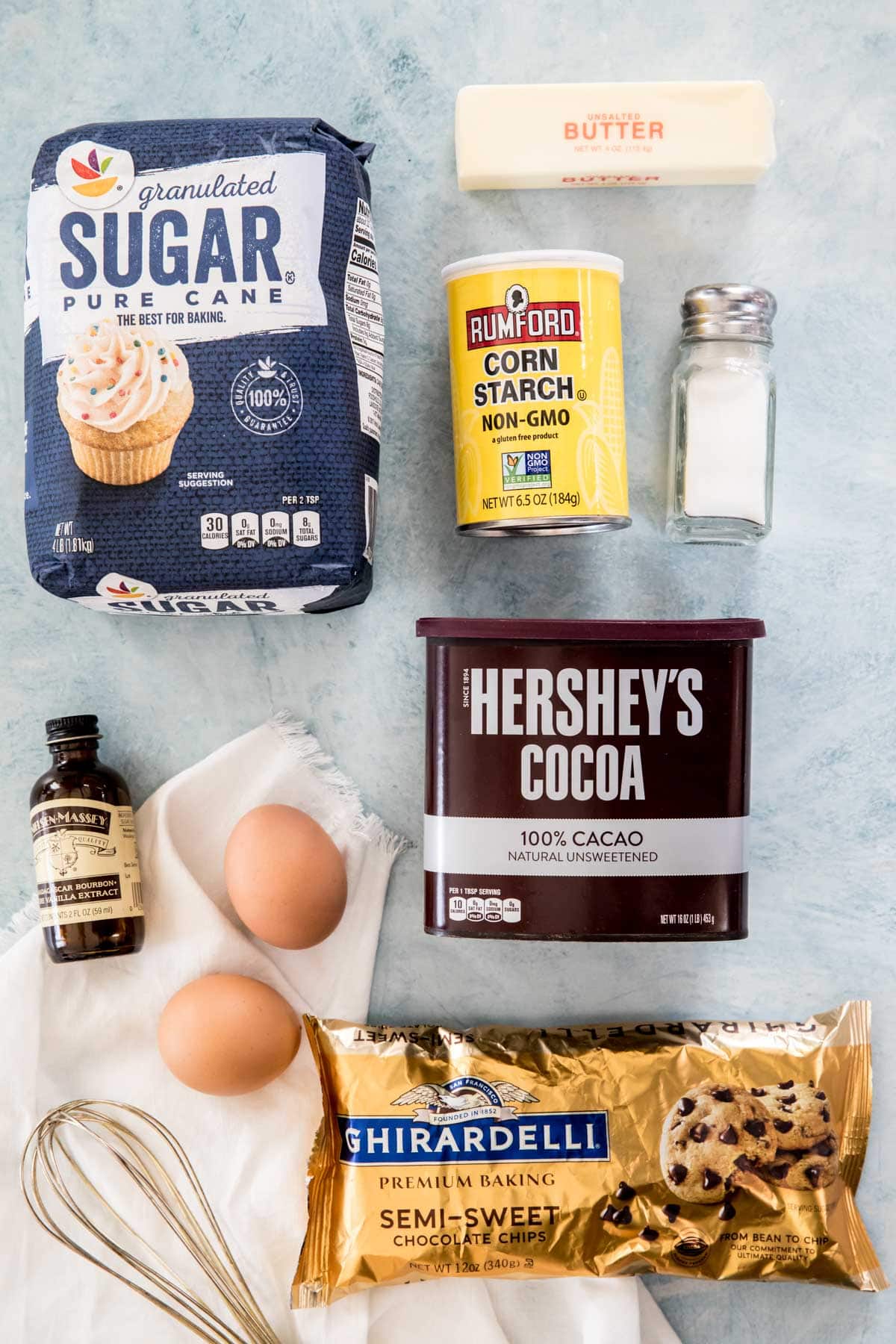 Note: This is just an overview of the ingredients that are needed and why I chose them. For the full flourless brownie recipe and amounts please scroll down to the recipe card. 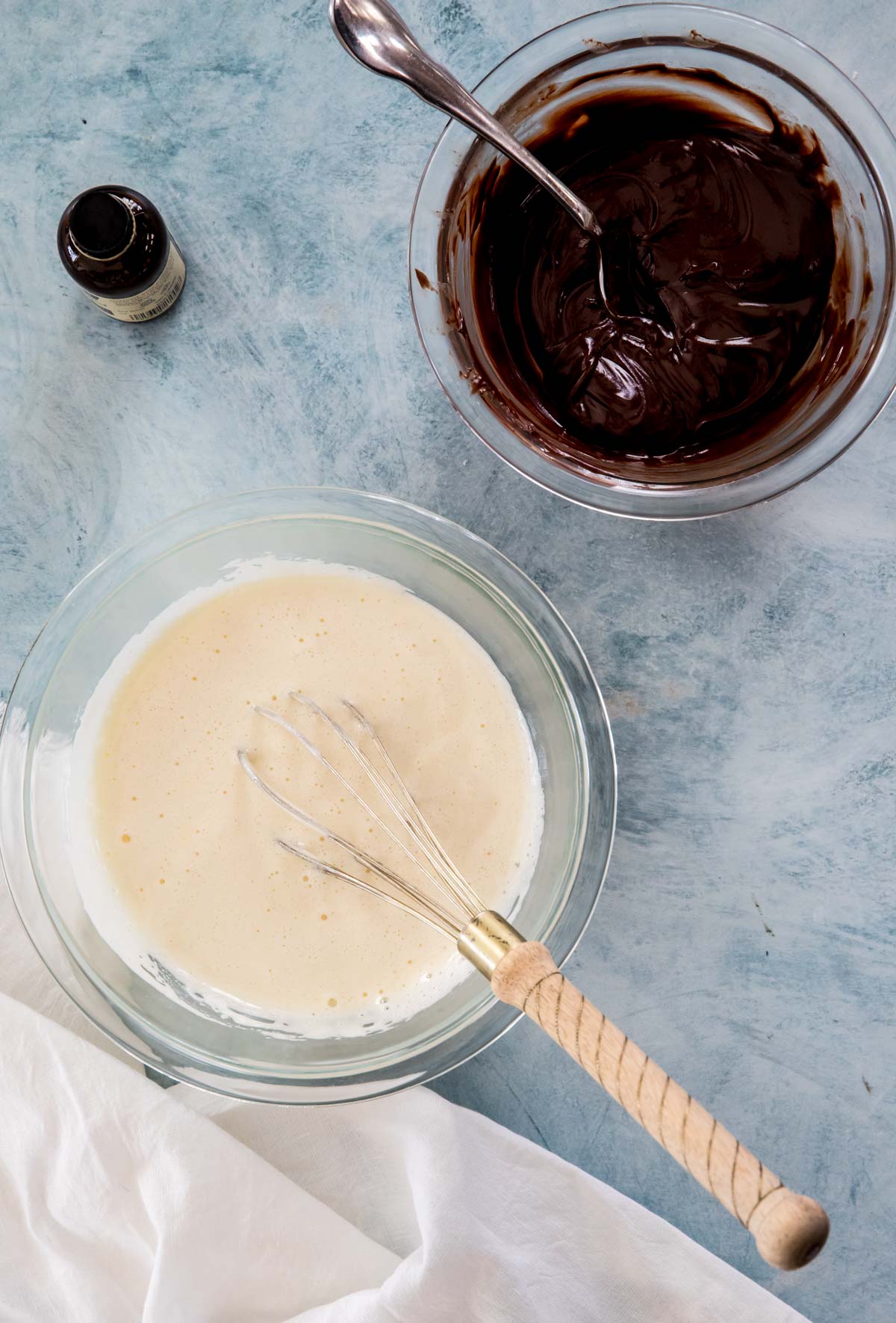 Whipping the Eggs Properly is Key When Making Flourless Brownies

Because there’s no flour in this recipe, there are a few key ingredients and steps that work to bind these brownies together so that they don’t fall apart in your hands once they’ve cooked and cooled. Possibly the most important step is whipping the eggs. While with some recipes like my angel food cake or Swiss meringue buttercream we beat the whites themselves, for our flourless brownies we want the whole egg (white and yolk… not the shell!). Here we beat whole eggs along with granulated sugar until the mixture is thickened and pale yellow (see photo above) and falls in ribbons when the beaters are lifted out of the mixture. For a visual, see my video in the recipe card.

Whipping the eggs on high speed helps to not only bind the brownies together and provide structure, it also gives them a tiny bit of lift (though not much, the brownies are quite thin, but decadent and fudgy,) and encourages that deliciously crackly meringue-like top.

Because we’ve put all of this work into whipping our egg whites, you want to handle them a bit delicately to not deflate them with your other (heavier) ingredients. After using your electric mixer to whip the eggs, calm things down a bit and stir the rest of your ingredients together manually and gently with a spoon or spatula.

I used a whisk in the photo below because I thought it showed off the texture of the brownie batter best, but I promise I was gentle with it 😉 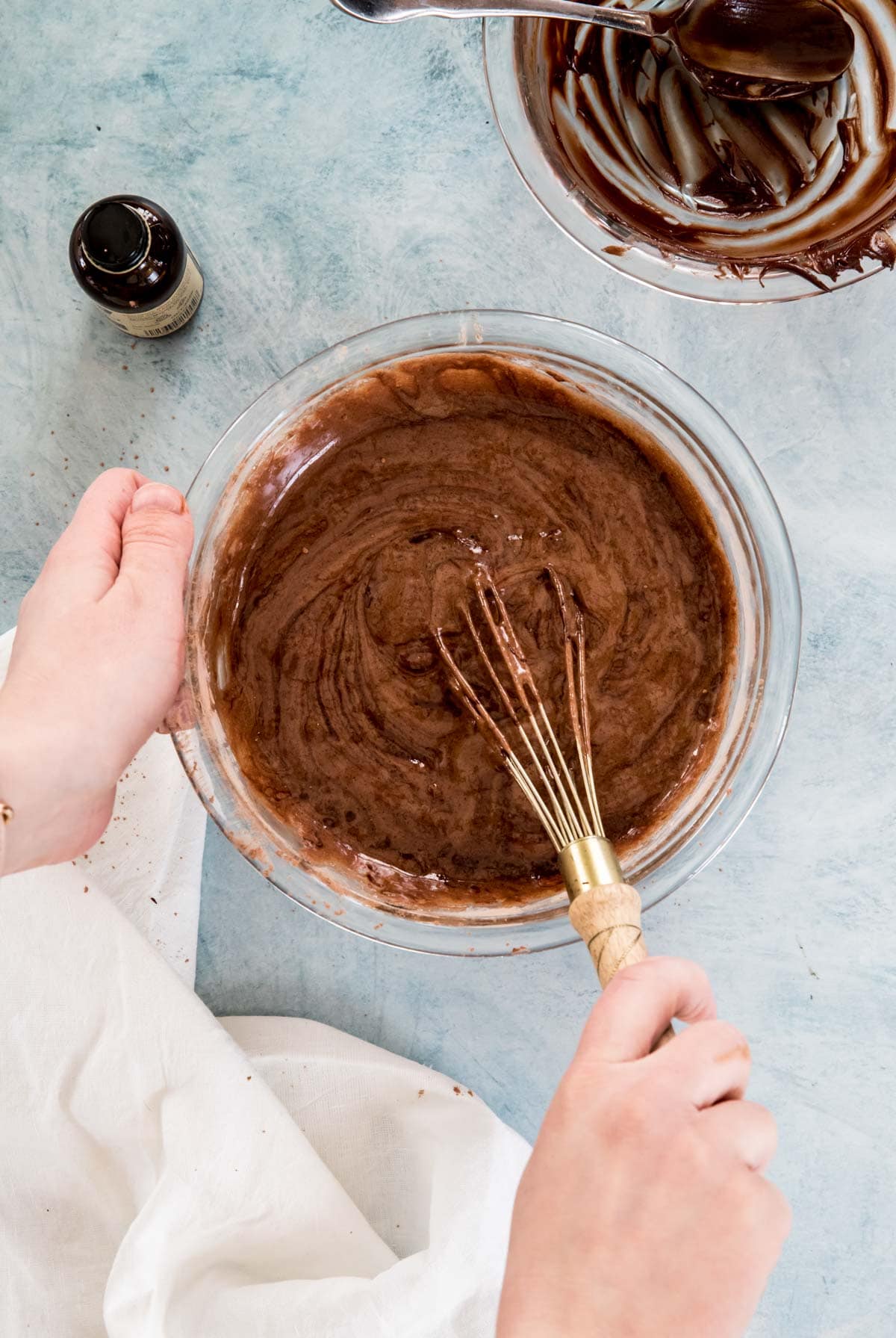 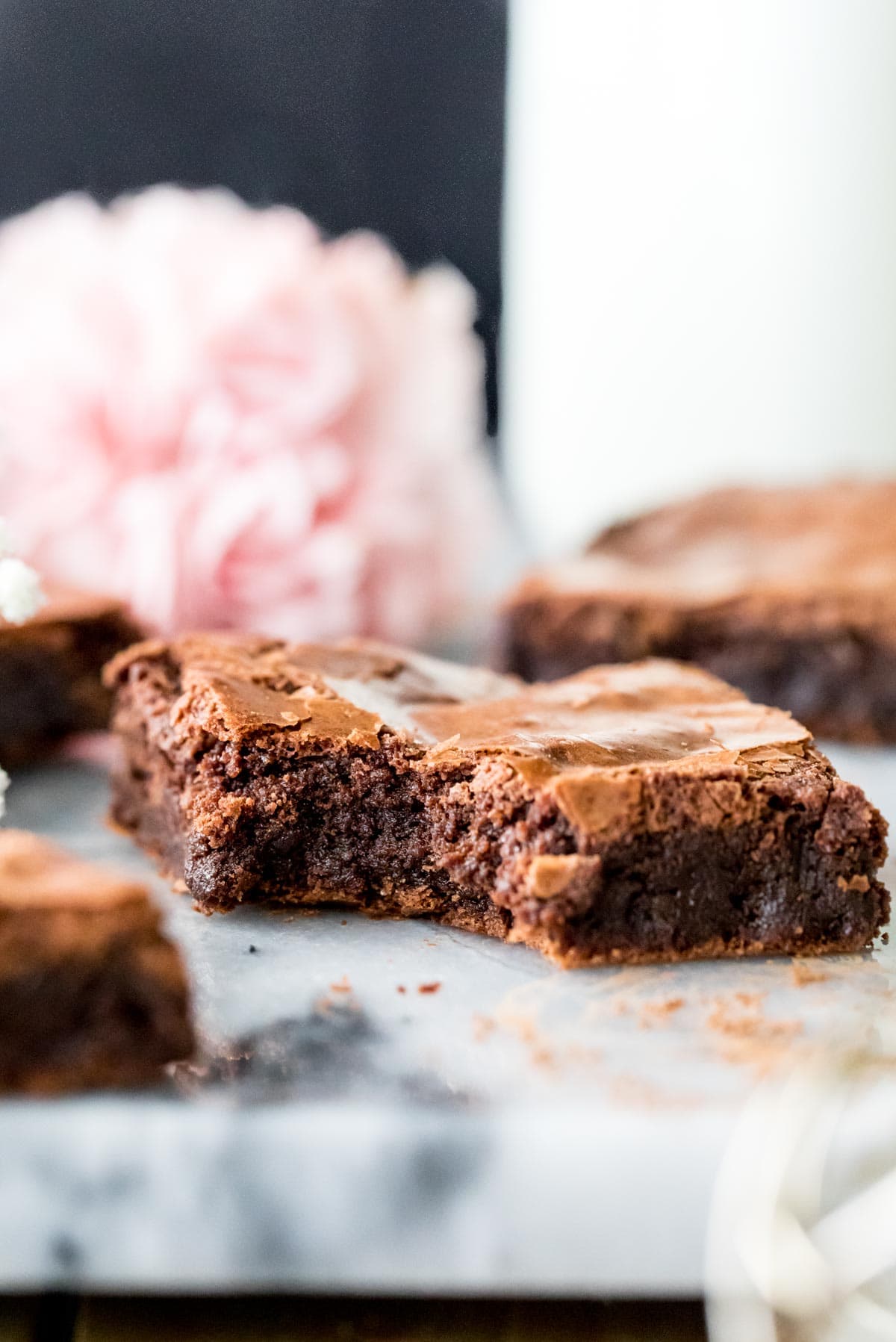 Be sure to check out the how-to video in the recipe card! 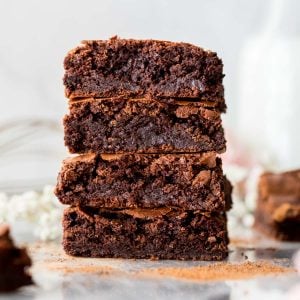 ¹You can bake these in a 9x9 metal baking pan instead, they will need about 25-30 minutes to bake.