×
You are here: Home / Sides / Creamed Spinach
This post may contain affiliate links. As an Amazon Associate I earn from qualifying purchases. Please read my disclosure policy.
Jump to Recipe Jump to Video Print Recipe 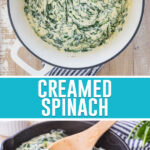 My creamy, easy, creamed spinach recipe is the perfect side dish for Thanksgiving, Christmas, or Easter dinner. It comes together in just 20 minutes and can easily be doubled to feed a crowd. Scroll down to watch the how-to video!

Ready or not, it might be time to start thinking about holiday meal prep! Whether you’re making dinner at home this year or heading to a friend or family member’s house, the meal will most likely include at least a few of the classics: turkey with cranberry sauce and stuffing, a side of homemade rolls, creamed spinach, and, for the pumpkin lovers among us, pumpkin pie for dessert.

Creamed spinach is one of my favorite Thanksgiving side dishes and I thought it was about time I share my own version on the blog. This recipe is a great way to sneak in a few greens, but realistically it’s rich, indulgent, creamy, and certainly doesn’t get a pass as health food.

My version is perfectly balanced with just the right amount of cream to complement rather than overwhelm the spinach, it can easily be doubled for a crowd, and it comes together quickly in less than 30 minutes. I honestly think you’re going to love this one, and can’t wait for you to try it!

My creamed spinach recipe is super easy. Here’s what you need:

How to Make Creamed Spinach

SAM’S TIP: While I do have an excellent spinach artichoke dip recipe, this recipe makes a good spinach dip as well! Just increase the milk and cream to be 1 cup each and toss in some chopped artichokes to make a dip! Serve in a bread bowl with plenty of crackers, chips, and veggies for dipping.

Why is my creamed spinach so watery?

It’s really important to thoroughly squeeze the water out of your spinach after you cook it, otherwise, all that water will go into your pot. If this happens to you, you can stir in some cornstarch while it’s cooking, or just keep cooking until the water evaporates and the mixture thickens.

Can I use frozen spinach instead of fresh?

Yes! You can use 16 oz. of chopped frozen spinach. Just be sure to thaw and drain well before adding to the recipe in step 10.

While others have successfully frozen creamed spinach, I find that it tends to separate when thawed. I recommend preparing and eating it fresh! 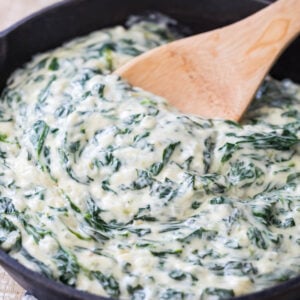 This thick and creamy creamed spinach recipe is the perfect side dish for Thanksgiving, Christmas, or Easter dinner. It comes together in just 20 minutes and can easily be doubled to feed a crowd. Scroll down to watch the how-to video!
5 from 6 votes
Print Pin Rate
Course: Side Dish
Cuisine: American
Prep Time: 5 minutes
Cook Time: 15 minutes
Total Time: 20 minutes
Servings: 8 servings
Calories: 252kcal
Author: Sam Merritt

I like to use fresh baby spinach. You can chop yours before cooking, but since it’s such a large mass of leaves I find it to be much easier to chop after cooking. You may substitute 16 oz of chopped frozen spinach instead, be sure to thaw and drain well before adding to the recipe in step 10.

Some people love to use a pinch of ground nutmeg in their chopped spinach. This is certainly an option, though I would omit the paprika and cayenne pepper if using nutmeg.

This recipe may be doubled with no alterations needed.

This recipe is best (and creamiest!) when served fresh. If you must make it in advance, store in the refrigerator in an airtight container for 1-2 days. You may notice some separation occurs, this is fine. To reheat, heat over medium/low heat until smooth and creamy and warmed through.