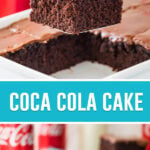 Crack open a can and make this Coca Cola Cake! Soft, chocolatey cake meets rich, fudgy icing in this classic southern dessert made with a not-so-secret ingredient. Scroll down to the recipe for a how-to video!

If the idea of pouring soda into cake batter doesn’t sit right with you, let me ease your mind.

Southerners have been making soda cakes like this Coca Cola cake since the early 1950s. At that time, busy home bakers loved the versatility of the bubbly beverage; not only did it provide sweetness and moisture, but it also acted as a leavening agent, adding lift and air. Using soda saved time and money, and it made some seriously crowd-pleasing desserts.

It’s worth noting that the cola in this cake is not overwhelming; instead, it imparts a very subtle flavor that complements the chocolate beautifully. It’s like a lighter (in texture, not in calories), less chocolatey version of my devil’s food cake that’s both moist and flavorful. To finish, it’s topped with a thick layer of soft, just-set icing (like the one on my Texas sheet cake) that is one of my favorites.

Making Coca Cola cake isn’t complicated, and neither are the ingredients! You’ll most likely have most these on hand already.

SAM’S NOTE: Traditional recipes like this Coca Cola cake have been passed down through generations, with each making their own modifications to suit their tastes. I’ve done the same with my recipe, omitting the marshmallows and pecans that appeared in the classic recipe, in order to let the cola flavor shine. The end result is a simple but standout chocolate cake that I think you’ll love. Side note: if you’re looking for chocolate cake that does include marshmallows and pecans, I suggest you try my Mississippi Mud Cake.

Remember, this is just an overview of some of the ingredients used and why. For the full recipe please scroll down to the bottom of the post!

How to Make Coca Cola Cake

This cake is chocolatey, but with a crumb that’s a bit less intense and less fudgy than my chocolate cake. As with most Coca Cola cakes, the cola taste itself is understated, but it adds a unique flavor that you’ll be able to distinguish when you try it.

Can I add nuts to this cake?

Yes! While I like it as is, you can certainly add a cup or so of chopped pecans or walnuts immediately after frosting. Just sprinkle them overtop! If you add them directly into the cake batter they may sink to the bottom.

Is it okay to use a flavored Coca Cola?

I don’t see why not! Cherry, orange, or vanilla would all be worth a try. If you do try this, definitely let me know how it turns out in the comments. 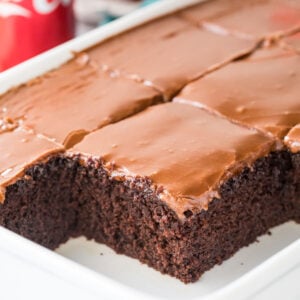 I do not recommend substituting Dutch-process cocoa powder, which has a stronger flavor and will overpower the already subtle flavor of the coca cola.

I always store this cake directly in the pan that it is baked in. It will keep, covered, at room temperature, for 3-5 days. The cake may also be refrigerated but keep in mind that this will dry out the cake. Coca Cola Cake may also be frozen (tightly covered) for several months.