×
You are here: Home / Soup / Broccoli Cheddar Soup
This post may contain affiliate links. As an Amazon Associate I earn from qualifying purchases. Please read my disclosure policy.
Jump to Recipe Jump to Video Print Recipe 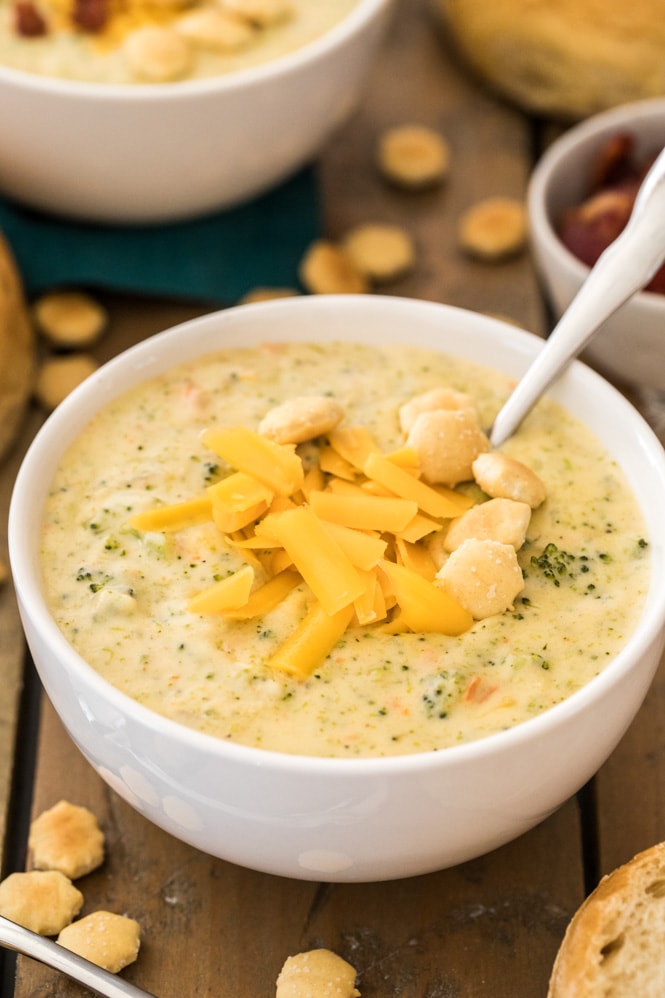 Creamy, cheesy, flavored with butter and sharp, off-the-block cheddar… can you think of a better way to eat broccoli?

I used to live less than half a mile from Panera bread and got my broccoli cheese soup fix there, but now that Zach and I have moved, the closest Panera is half an hour away. It’s been… an adjustment…

What’s that saying? “Necessity is the mother of invention”? On-demand broccoli soup is kind of a necessity around here, especially while the weather is still blustery and cold, so it was time to finally develop my own recipe. As usual, it took a lot of testing.

There were some versions tried with bacon (that worked so well with my chili recipe and potato soup but fell flat here, and even bacon couldn’t convince Zach to eat a soup made primarily of broccoli) and some versions with garlic, but surprisingly they all lost out to this simple, fresh-tasting version. 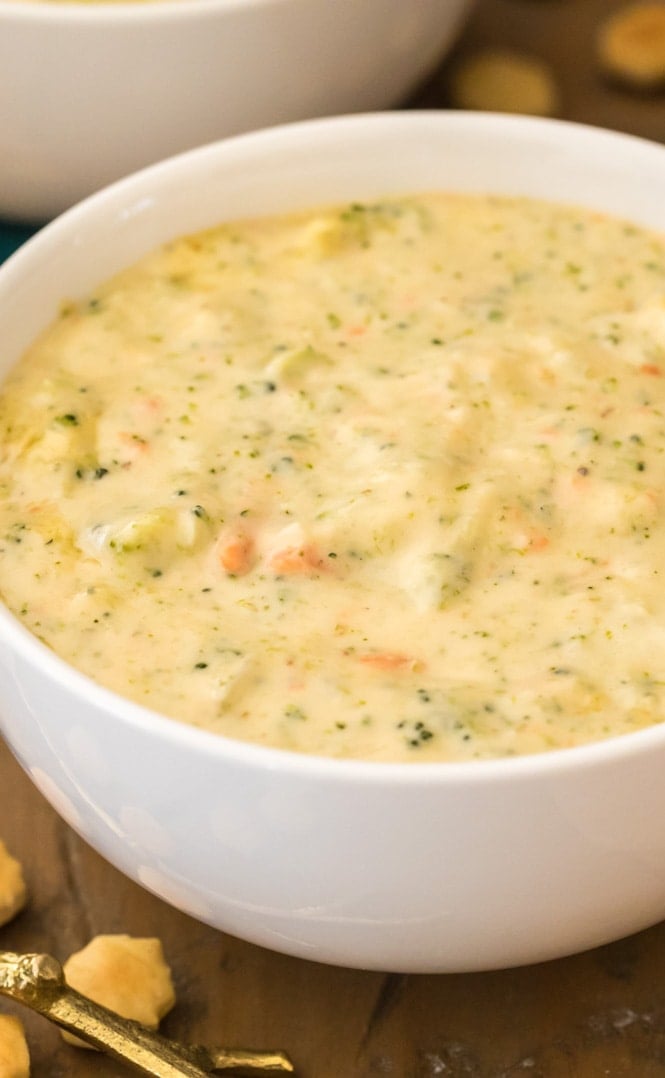 A good soup needs a good bread to go with it. Serve this with my homemade biscuit recipe, dinner rolls, or garlic knots. Or, even better, wait until Thursday when I’ll be sharing my homemade bread bowl recipe! 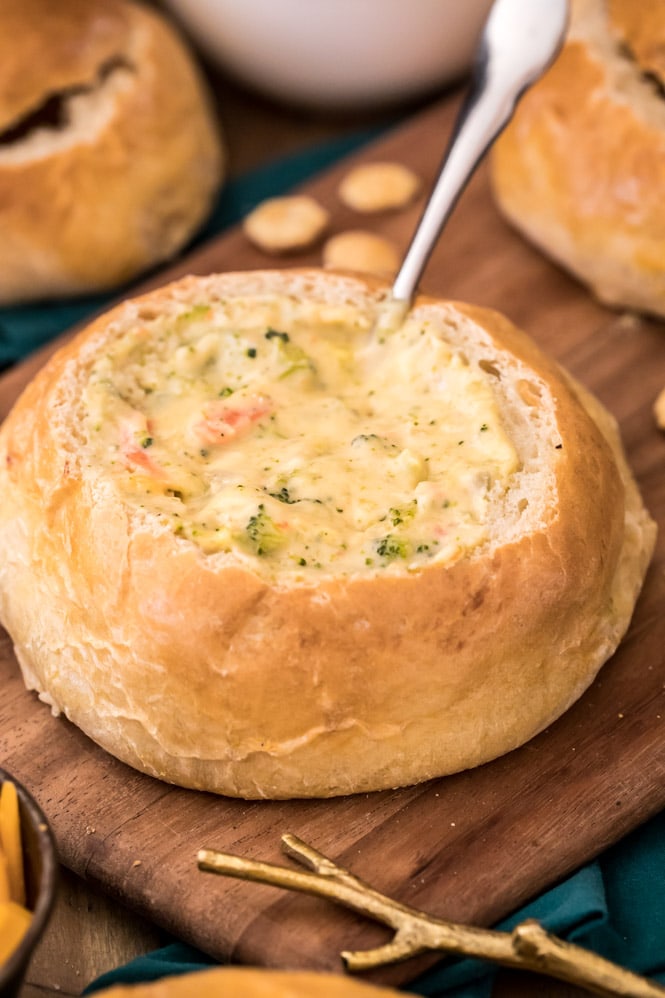 Our broccoli cheddar soup starts with a simple roux that helps to thicken it. If you’ve made my baked mac and cheese or corn chowder, you’ve done this before. After melting the butter and sautéing the onion, whisk flour into the pot until it’s smooth. This is the base for our roux.

Slowly whisk in some of the milk until thickened. Don’t add it all at once or it won’t thicken as nicely.

Making a roux is honestly simple, but if you haven’t done it before it may be helpful to read the recipe over before beginning and to watch the video below the recipe.

I prepare the broccoli much the same way that I do for my broccoli salad. I buy a pound of broccoli and then chop off the stems and cut the florets into small pieces (see photo below), which I’ll then go over briefly with a large knife in a mincing motion.

Don’t worry if you still have some larger pieces of broccoli remaining, we’re going to be using a blender to puree the soup before it’s finished cooking, which will give it a smooth and creamy texture. Puree as much or as little as you’d like to suit your own preference. 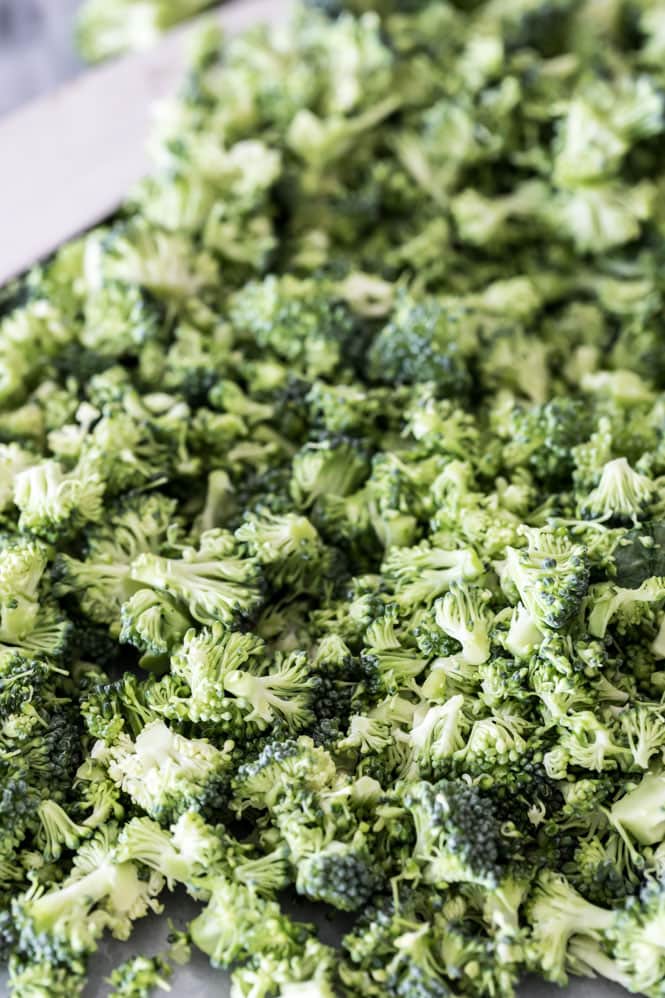 Let’s bake together! Head on over to my YouTube channel where I’ve already uploaded hundreds of recipe videos that you can watch for free!

¹I usually buy 1 lb of fresh broccoli crowns and am left with enough after removing the stalks and cutting the florets.