×
You are here: Home / Breads / Beignets
This post may contain affiliate links. As an Amazon Associate I earn from qualifying purchases. Please read my disclosure policy.
Jump to Recipe Jump to Video Print Recipe 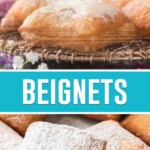 My pillowy-soft Beignets are made New Orleans-style, meaning they’re fluffy, melt-in-your-mouth and buried beneath an avalanche of powdered sugar. They’re surprisingly simple to make, too, no deep fryer required!

With Mardi Gras right around the corner I thought it might be a good time to share my easy to make and impossible to resist beignet recipe!

When making beignets (pronounced “ben-YAYs”), there are two different ways you can go about it, the traditional French way or the New Orleans way.

Traditional French beignets are made with pâte à choux (AKA, the base used for gougeres and to make the shells for my cream puffs and eclairs). While it’s unsurprising that the beignets of New Orleans stem from the same French roots, instead of being made steam-raised with choux pastry they’re instead made with a yeast-raised dough that’s very similar to a donut (only airier).

Choux pastry has its place in my life, but I much prefer the fluffier, pillowy-soft, yeast-raised New Orleans-style Beignets, and this is what I modeled my version after. Let’s get started.

What You Need for Beignets

Beignets use basic, easy-to-find ingredients, and I just want to briefly touch on a few of them…

How to Make Beignets (the New Orleans Way!)

Once the dough has risen and your oil is warming the fun frying can begin.

Enjoy warm! They are so good fresh, nothing compares!

Can I use instant yeast?

Yes, you can substitute instant yeast for the active dry that is called for.

Why didn’t my yeast foam?

Either the yeast is expired/dead or the milk/water was heated above the required temperature range (killing the yeast on contact) or it wasn’t heated enough (so it wasn’t warm enough to activate it.
Also, make sure you didn’t accidentally add salt to your yeast mixture instead of the sugar that I call for to speed things along (or maybe I’m the only one who’s ever made that mistake 😳).
Regardless of the cause, if your yeast doesn’t proof you’ll need to toss it out and start over.

Why is my dough so sticky after rising?

Yeast dough can be temperamental when it comes to precisely how much flour to add. If you’re trying to roll out your dough and it’s just too sticky, simply add more flour to your counter surface and to the surface of the dough until it’s easy to handle.

Why are my beignets raw inside?

This is usually a sign of an over-ambitious oil-heater or someone trying to get away without using a thermometer (not impossible to do, just tricky!). Typically if the beignets look perfectly golden on the outside but are raw on the inside it’s due to the oil being too hot. Make sure the oil is at a steady 375F

Why are my beignets greasy and taking a long time to cook?

Another oil temperature issue! Often this is caused by oil that is too cold. Make sure you are letting it get back to temperature between batches of beignets.

Can I make the dough in advance?

Yes! Make the beignet dough and let it rise, deflate and cut into squares as instructed. Keep these stored in an airtight container in the refrigerator for up to two days before frying.

Can I bake these instead of frying?

I wanted to address this question since I know I’ll be asked it in the comments. I haven’t yet tested baking beignets myself but I think these would be fine if baked, albeit more dense and less pillowy, and certainly less golden.
First person who tries it and lets me know how it turned out for them in the comments gets a gold star (I’m thinking a 350 bake time would be ideal). 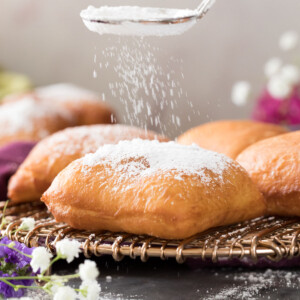 ¹If yeast does not become foamy either your liquid temperature is not accurate or your yeast is dead. Either way you will need to throw out the mixture and start over.

You may substitute instant yeast, if so you will not need to proof the yeast. To do this, combine yeast, sugar, salt, and half the flour and then add the warmed milk and water and stir well, then stir in butter, then egg, then stir in remaining flour as needed.

You can prepare the dough, let it rise, cut it into squares and then store squares in the refrigerator in an airtight container to fry 1-2 days later.