×
You are here: Home / Savory / Stuffed Shells
This post may contain affiliate links. As an Amazon Associate I earn from qualifying purchases. Please read my disclosure policy.
Jump to Recipe Jump to Video Print Recipe 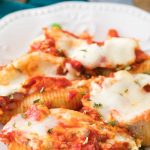 Easy, cheesy Stuffed Shells (with a secret ingredient in the filling!!) that can be assembled and in the oven in a matter of minutes. This easy dinner recipe is incidentally vegetarian and made with the option to use homemade or jarred sauce (if you’re in a hurry!). Less than 20 minutes of prep! 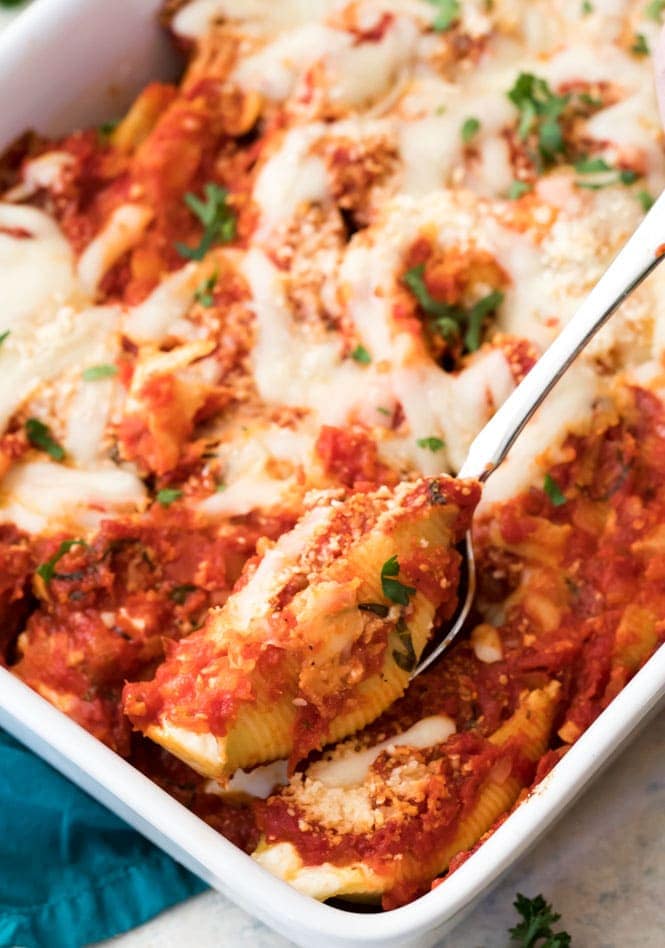 I would’ve shared these Stuffed Shells with you weeks ago if they were only prettier.

I don’t think I’ve ever had as much trouble photographing a recipe as I did here! In addition to all of the recipe testing, I made this recipe three separate times just trying to get pretty, or at least appetizing, photos!

The sad truth is that stuffed shells simply aren’t very pretty. You’d think they might be, those beautiful, jumbo, yellow-gold shells encasing a velvety, cheesy filling, but no. Once you top them off with a layer of marinara sauce, the flavor is improved but the appearance… not so much. I even considered cooking them a different way (sauce underneath, not on top) simply so I could get a respectable picture.

Ultimately I opted against sacrificing taste for appearance (obviously) and have resigned myself to the fact that these shells just need to be shown a they are. Maybe they look a little sauce stained and messy, but taste-wise they’re sheer perfection. 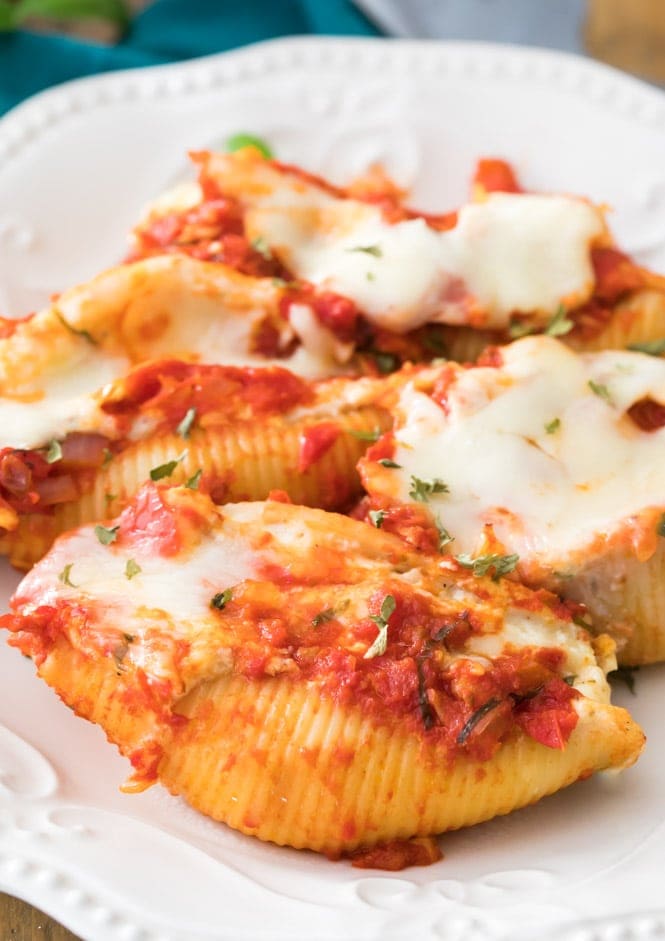 You can use a store-bought pasta sauce for this recipe if you’re in a pinch, otherwise I really, really recommend you make my homemade marinara sauce.

Stuffed Shells are a great vegetarian option but if you want a meatier version you can use the sauce from my baked ziti recipe instead.

Oh, and if you’re looking for a perfect stuffed shell dinner pairing, can I recommend whipping up a batch of my garlic knots? 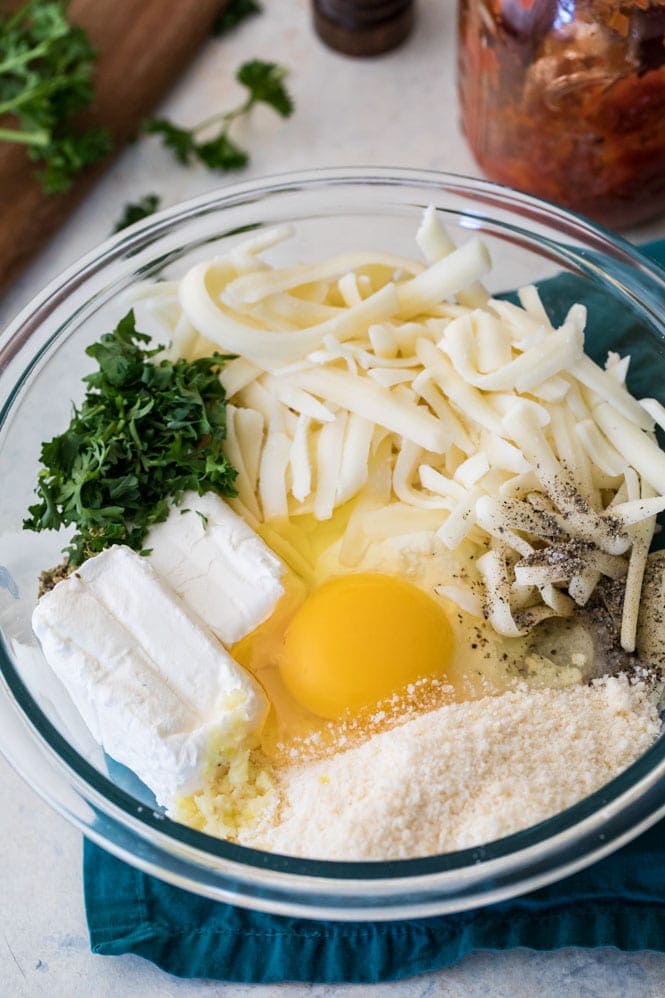 Did you catch that secret ingredient up there in my mixing bowl?

Four ounces of cream cheese! While you might think that a half brick of cream cheese stirred in along with three other cheeses (mozzarella, parmesan, ricotta) seems excessive, I guarantee you it is so worth it. And besides, we’re cutting back a bit on the other cheeses to compensate for this addition.

If you’re a cream cheese hater, I want to let you know that I have two siblings who hate cream cheese. And yet when they tried the stuffed shells, they loved them and could not detect so much as a whiff of distinct cream cheese flavor. And they requested seconds!

Maybe you’re wondering: if no one could tell there was cream cheese, then why add it? I promise I’m not just out to make you spend more money at the grocery store. While the cream cheese doesn’t have an overpowering or distinct taste, it lends a smooth, velvety creaminess to the filling, a subtle depth of rich flavor. I’ve tried these stuffed shells both ways (with and without), and they just taste so much better with the cream cheese. 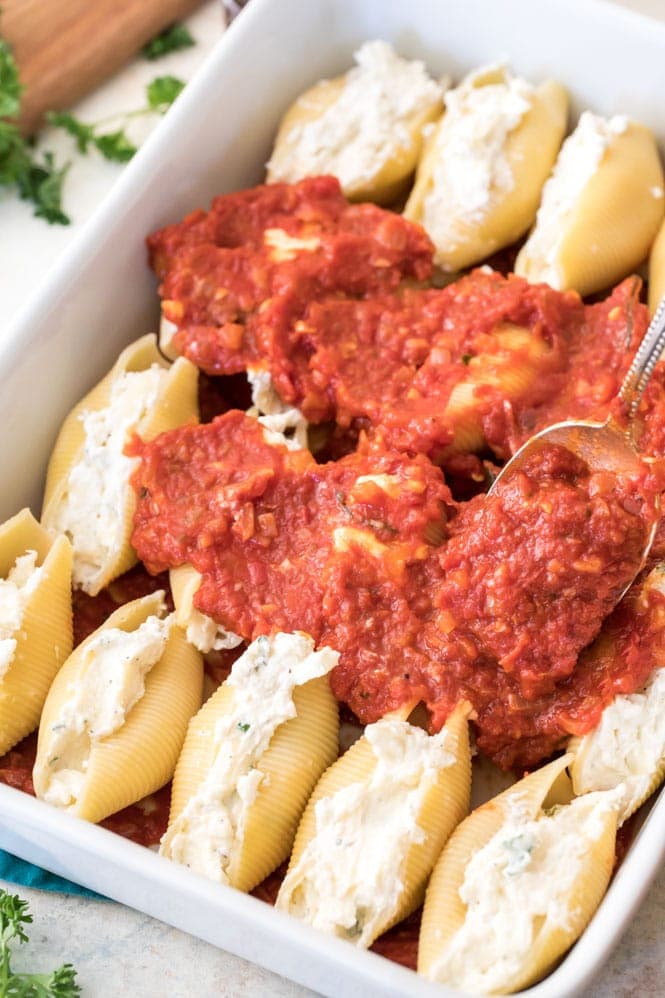 How to Make Stuffed Shells

Making in Advance and Refrigerating

Can You Freeze Before Baking?

You can definitely freeze stuffed shells, and I recommend doing so before you bake them (rather than after). You can freeze one of two ways: 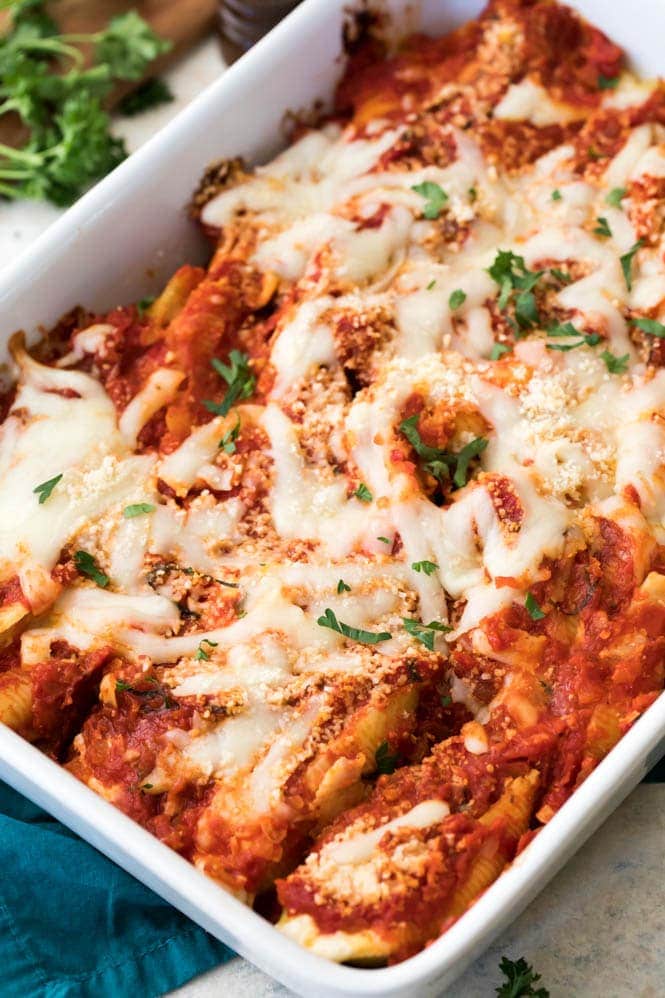 Be sure to check out my vdeo at the bottom of the recipe! If you enjoy watching, make sure to subscribe to my YouTube channel where I’ve already uploaded over 200 recipe videos that you can watch for free! 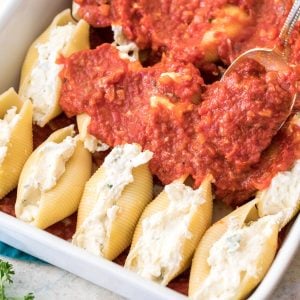 Easy, cheesy Stuffed Shells that can be assembled and in the oven in a matter of minutes. This stuffed shell recipe is made with the option to use my homemade marinara or jarred sauce (if you're in a hurry!). Less than 20 minutes of prep-time! Be sure to check out the how-to video below the recipe!
5 from 14 votes
Print Pin Rate
Course: Main Course
Cuisine: American, Italian
Prep Time: 15 minutes
Cook Time: 30 minutes
Total Time: 45 minutes
Servings: 20 stuffed shells
Calories: 185kcal
Author: Sam Merritt

Check out my Garlic Knots -- they're a great side for stuffed shells, or any pasta recipe!  ¹You will only need 20 shells for this recipe, but I usually boil a few extra in case some tear ²You can use store-bought marinara sauce or you can use my homemade marinara sauce recipe (better option!!). My recipe makes 3 cups, so you will use all of it for these Stuffed Shells. See post for instructions on freezing/making ahead