×
You are here: Home / Desserts / Cake / Apple Cake
This post may contain affiliate links. As an Amazon Associate I earn from qualifying purchases. Please read my disclosure policy.
Jump to Recipe Jump to Video Print Recipe 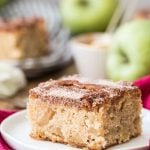 This recipe is a slight modification of my grandmother’s popular Jewish Apple Cake Recipe (for those of you who don’t like change, I’ve made notes so you can make it exactly as her recipe is written!). Super simple to make, no mixer required! Recipe includes a how-to video!

We took Luke apple picking over the weekend (scroll to the bottom of the page for a picture!) and after bringing home approximately 20 lbs of apples I asked on Instagram if there were any apple recipes that you’d like to see. In addition to apple fritters and apple butter, I received so many requests for a “good apple cake”. Fortunately, I already had this recipe planned to share with you today.

This is my grandmother’s apple cake recipe…. sort of. Because I’m basically incapable of leaving any recipe unaltered, I made a few subtle changes to her original recipe. I truly wasn’t sure if I could improve upon the original, but after taste-testing (and having my family taste-test) I decided I wanted to share my version with the alterations. Look, I’ve shared plenty of her recipes as she shared them with me (like her hot milk cake and apple dumplings!), so just trust me on the changes here!

Because I know I’m going to get a few comments asking me exactly how my grandmother’s recipe was written, I included the notes on how to make it as per her instructions in the recipe card.

The recipe is simple, and the texture and technique actualy remind me a lot of my banana cake. The crumb is a bit more dense than a classic cake and is almost like a quick-bread, between the sugar in the batter and on top it’s sweet enough that it doesn’t need any frosting.

This is just an overview of the ingredients I used and why. For the full recipe please scroll down to the bottom of the post!

How to Make Apple Cake

The batter for this recipe can be made in a single bowl in 5 steps and it can be done completely by hand (no mixer needed).

TIP: Because this cake is moist and a bit dense it can be difficult to tell when it’s finished baking (the toothpick test doesn’t always cut it). If you’re not sure if your cake is done, pierce the center with a sharp knife and take a peek inside to make sure it’s not raw!

What if I don’t have buttermilk?

Use my easy buttermilk substitute instead (you just need whole milk and vinegar or lemon juice). Alternatively, use orange juice, which is what my grandmother uses in her recipe.

Can I make this in a bundt pan?

Yes, but either omit the topping and use the glaze from my bundt cake recipe or you can portion half the batter into the pan and then layer and swirl some of the topping in the center before adding the rest of the batter.
To make in a bundt pan, thoroughly grease and flour the pan first and then bake for approximately 1 ½ hours. Check after an hour and loosely tent with foil if the cake is browning too fast. Use a wooden skewer or knife to test if it’s done.

What kind of apples should I use?

Granny Smith are my preference and a nice slightly tart contrast to the sweet cake. However, just about any apple may be used (Honeycrisp, Gala, Cortland are all good choices). Keep in mind Granny Smith apples are quite tart and substituting a sweeter apple (which is just about any other apple) will make the cake sweeter, too.

How should I store apple cake / how long will it keep?

Store in an airtight container at room temperature for up to 5 days. It may also be frozen (tightly wrapped) for several months.

Can I make this as cupcakes/muffins?

I haven’t tried it but I don’t really see why not. Instead I’d rather direct you to my apple crumble muffins, which are specifically designed to be made in a cupcake tin . 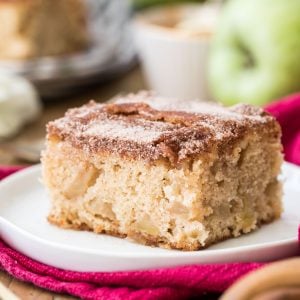 This recipe is a slight modification of my grandmother's popular Jewish Apple Cake Recipe (for those of you who don't like change, I've made notes so you can make it exactly as her recipe is written!).Be sure to check out the how-to video!
5 from 20 votes
Print Pin Rate
Course: Dessert
Cuisine: American
Prep Time: 20 minutes
Cook Time: 45 minutes
Total Time: 1 hour 5 minutes
Servings: 16 pieces
Calories: 384kcal
Author: Sam Merritt

My grandmother’s recipe was done by mixing together the cinnamon, sugar, and apples first and setting aside. She used all granulated sugar and no brown (2 ½ cups/300g total), all oil and no butter (so 1 cup oil total) and orange juice instead of the buttermilk. Half the batter was layered into the pan, then the apple/cinnamon/sugar mixture, then the rest of the batter, and it was baked for approximately 1 ½ hours.

Store in an airtight container (or covered with foil or plastic wrap) at room temperature for 5 days. May be frozen for several months.