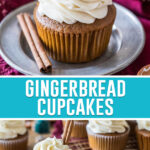 These moist and fluffy Gingerbread Cupcakes are carefully designed to have beautiful domed tops. My recipe is quick (less than an hour) and includes a cinnamon and brown sugar frosting. Includes a how to video!

Can you think of a more festive and tasty way to welcome December than with soft and fluffy gingerbread cupcakes? These are outrageously moist and tender cupcakes packed full of seasonal spices and flavor. We’ll be topping them with a brown sugar and cinnamon spiced variation of my cream cheese frosting, and it complements the cozy, classic gingerbread flavor so well!

If this gingerbread cupcake recipe looks a bit familiar that’s because this is actually an update of an older recipe. While the original was one I was proud of, over the years I felt I could improve upon it. Some people struggled with cupcakes that dipped in on themselves as they cooled, so I wanted a slightly sturdier cupcake that would yield a domed top and could hold its own under a mountain of frosting. ✅✅

And, speaking of frosting, this recipe really does make a mountain. As written, this recipe will make more than enough to cover every cupcake as is shown in photos. If you don’t like a lot of frosting you can cut the recipe in half (or double the cupcakes!).

There are quite a few ingredients in the photos above, so let me highlight some important ones:

SAM’S TIP: Your batter will be quite stiff and dry after you add the butter and oil–this is normal. It will start to thin out once you add the molasses (I switch to a mixer for this part, but with a little elbow grease you could make this entirely by hand).

How to Make Gingerbread Cupcakes

SAM’S TIP: I love using an ice cream scoop to portion the batter into cupcake liners. It makes the process super easy, quick, and clean!

How do I make mini gingerbread cupcakes?

You can follow the recipe as written, but you will want to fill your mini liners about halfway full. Your mini gingerbread cupcakes will likely bake for just a few minutes less than the full-size version, maybe 14-15 minutes.

Can I use this recipe for gluten free gingerbread cupcakes?

I haven’t tried this recipe with a gluten free flour, so I can’t say how it would turn out; however, a 1:1 gluten-free flour should work fine. If you try this, please let me know how it goes for you!

Can I use this recipe for a cake?

I would recommend you use my gingerbread layer cake recipe instead; it’s similar, but has been carefully tested and perfected to be baked as a layer cake, and it’s slightly more moist and dense than this one. If you love these gingerbread cupcakes, you will love my gingerbread cake! 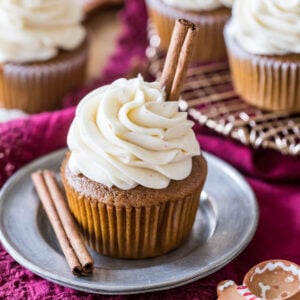 This recipe makes a generous amount of frosting. It will cover all of your cupcakes generously (as shown in photos) or will modestly cover 24 cupcakes. If you want only a modest amount of frosting, feel free to cut the frosting in half (or double the cupcake recipe!).

Store in an airtight container at room temperature for up to 48 hours or in the refrigerator for up to 4 days.

Using this recipe for cake

I recommend using my gingerbread cake recipe instead, it is closely related to this one, but designed to be a perfect cake.

I originally published this recipe in 2016. In 2022, I’ve improved the recipe to be a bit sturdier, softer, and slightly more domed (since some people with the original recipe had mentioned problems with the cupcakes sinking in on themselves). If you’re looking for the original recipe, you can find it here, but note that I am no longer accepting comments on the original recipe.