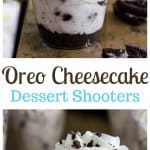 Fun bite-sized cheesecake treats that are great for any party or get-together.  Made single-serving-sized in disposable shot glasses, these (non-alcoholic) Oreo Cheesecake Dessert Shooters are guaranteed to be a hit at your next event! 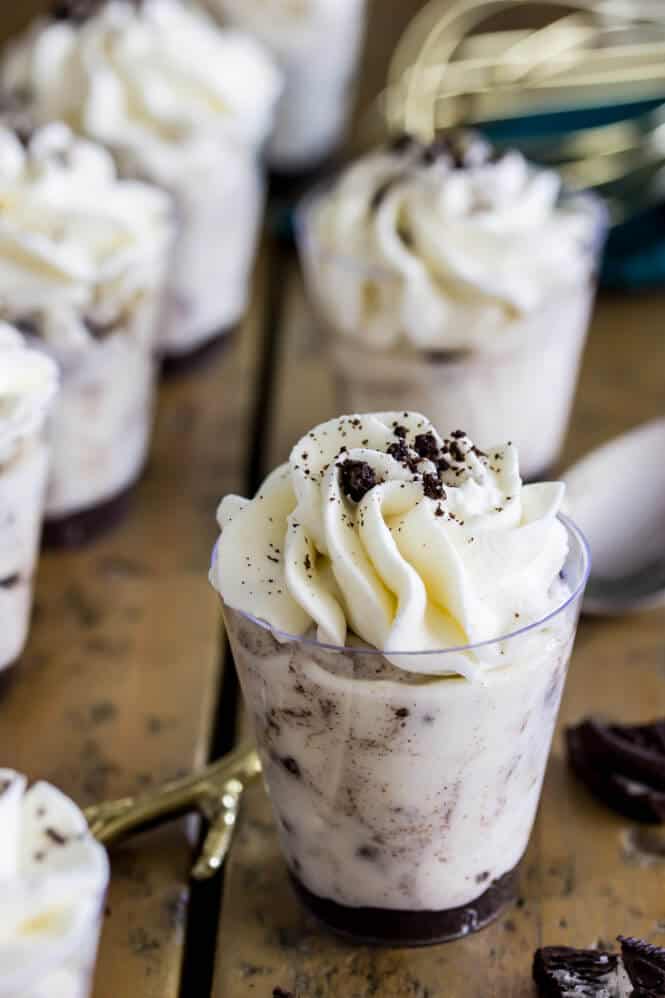 I took these Oreo Cheesecake Dessert Shooters to a friend’s going away party last weekend and they were a huge hit.  The container I’d brought them in was completely wiped clean before the evening ended.  They disappeared even faster than my well-loved chocolate chip cookies that I’d also brought, which is saying a lot (seriously, check the reviews, those cookies have always been my number one recipe and I’m wondering if they’re about to be dethroned!). 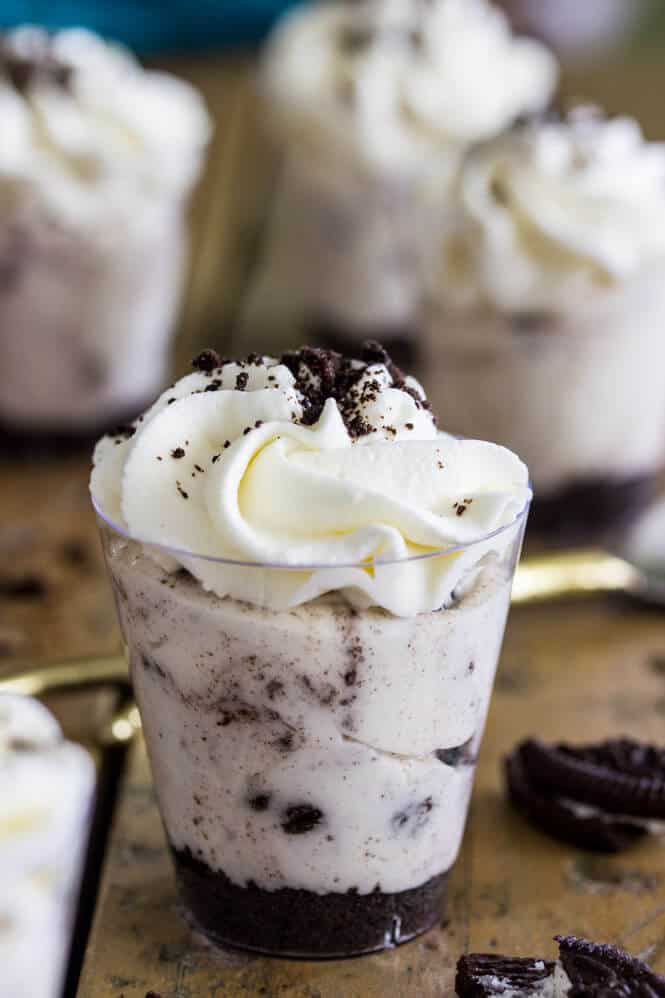 These are not my first dessert shooters, in fact they’re my 10th such recipe that I’ve shared on the blog (8 of which can be found in my free e-book), but I have such an affection for these cute little cups and their single serving-sized nature.

Easy to make, easy to eat, and just so dang adorable in their shot glass shells, they’re like mini Oreo cheesecake on Oreo crusts, only with less hassle and no baking.

They have a creamy texture and a true cheesecake taste and there’s one very key element that gives them that signature taste — sour cream.  I’ve generally always found cheesecakes made without sour cream to fall flat in terms of taste, and so sour cream is a critical ingredient that gives these desserts some serious depth and flavor. It’s what makes my no-bake cheesecake such a hit with everyone who tries it — don’t skip it! 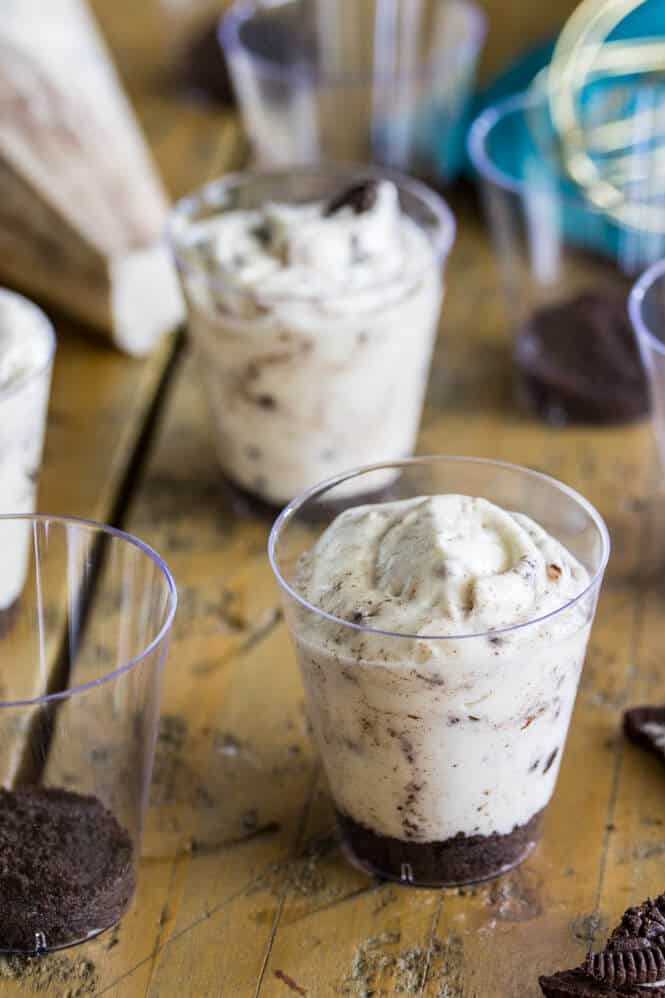 I included notes in the recipe so that you can speed the process up and use Cool Whip rather than making your own whipped cream, but I think what really makes these cheesecake shooters so irresistible is the fact that they are entirely made from scratch (save for the actual Oreo bits, of course).

Homemade whipped cream is extremely simple to make, all you need is an electric mixer with a whisk attachment and just a few minutes of patience to whip your cream to stiff peaks (which simply means that if you dip your whisk straight into the whipped cream and pull it straight back out, the peak that results from the whisk remains stiff and straight and doesn’t recede back into the cream or bend over).

Also, when you think about it, even with whipping your own cream it’s still much faster than making a from-scratch cheesecake, and you don’t need to turn on the oven to make these! If you want to make these even more decadent, substitute the whipped cream on top with chocolate whipped cream, instead! 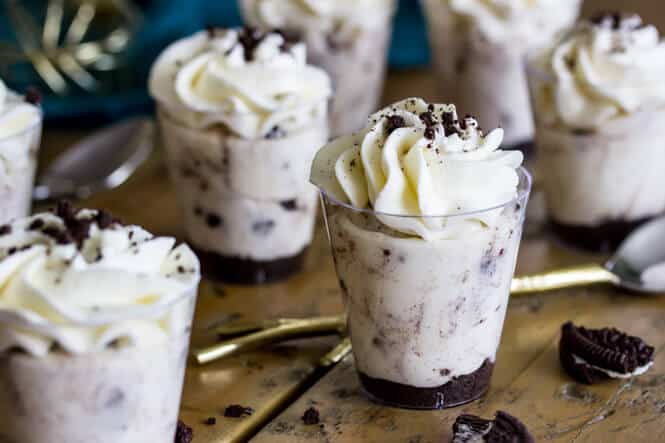 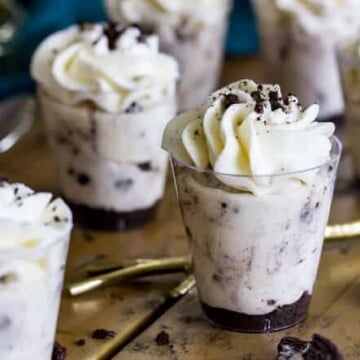 *You may substitute Cool Whip for the topping if you do not wish to make it from scratch.  A single 8 oz container will be enough.

This post contains affiliate links, which means that if you purchase anything through these links I will get a small commission at no extra cost to you.  Please view the disclosure policy for more information.