Sweet and sour with a kick of whiskey, this Star Wars-inspired Midori Sour pays tribute to the bounty hunter Greedo’s last moments in the violence-riddled Mos Eisley Cantina from A New Hope. 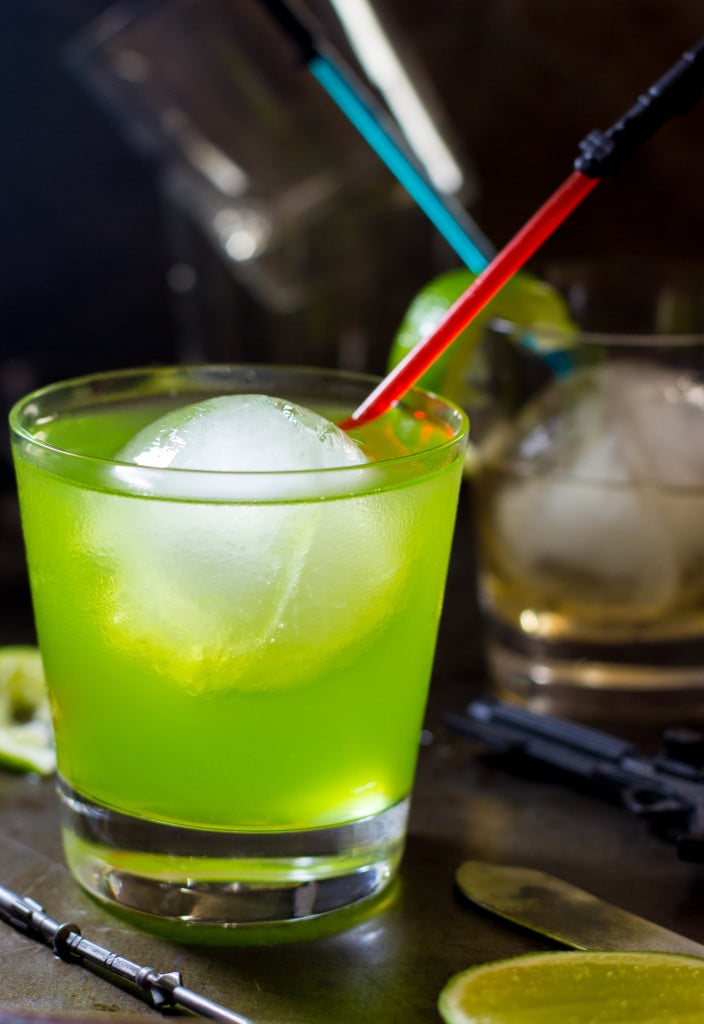 When I was four or five years old, I was watching TV on the couch with my dad as he flipped through the channels when he settled for a moment on a scene of a young, dirty-blonde man in a desert, two dusky suns settling into the horizon.

That scene was the iconic one of Luke Skywalker outside his aunt and uncle’s house on Tatooine, and it took only that instant to spark an obsession that has stayed with me my whole life.  When my dad tried to move on to a new channel, I kept asking him to go back!

The next two nights I was allowed to stay up and watch episodes V and then VI, and my Christmas list for that year was nothing but Star Wars memorabilia and movies (I still have my well-worn original VHS tapes), and my infatuation with the Star Wars world continued to grow.

As a kid, I introduced myself to new neighbors with a plastic green lightsaber in hand and quoted my religion as “Jedi”.  As an adult I now have a puppy named (Princess) Leia, and a stipulation of my marriage to Zach was that if we ever have children, our firstborn son will be named Luke.

With Episode VII premiering in theaters tonight, I thought it was only fitting that I commemorated the saga that has been my obsession for over two decades with a recipe. 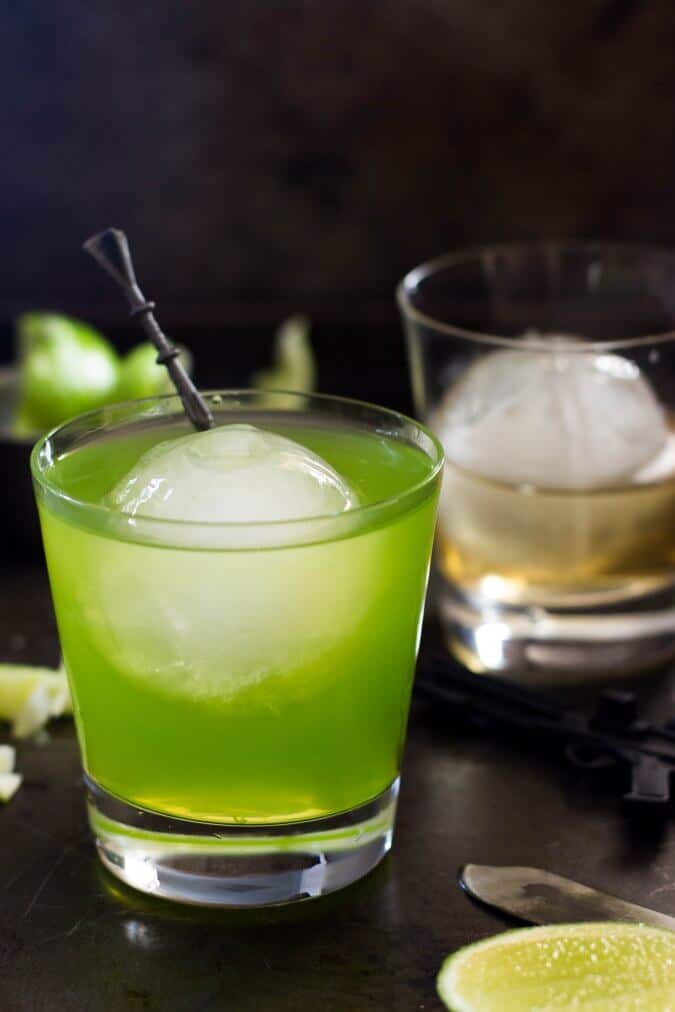 I’m not seeing The Force Awakens tonight (last night, by the time this is published) because I hate being swarmed in large crowds (though I’m not sure that December 23rd, when I do have a ticket, will be much better), and the anticipation of the wait and the anxiety and fear that someone will drop a spoiler–I’ve gone dark from my personal Facebook account for the time being–is killing me.  I’ve been possessed by an itchy, electric current of irritation and anticipation buzzing non-stop beneath my skin.

Originally, my plan was to do a tribute to every episode (starting with IV and ending with III) in the weeks prior to the release of The Force Awakens, but time has a way of getting away from me.  I still may do this, though, and I’m starting today with a tribute to the original–episode IV. 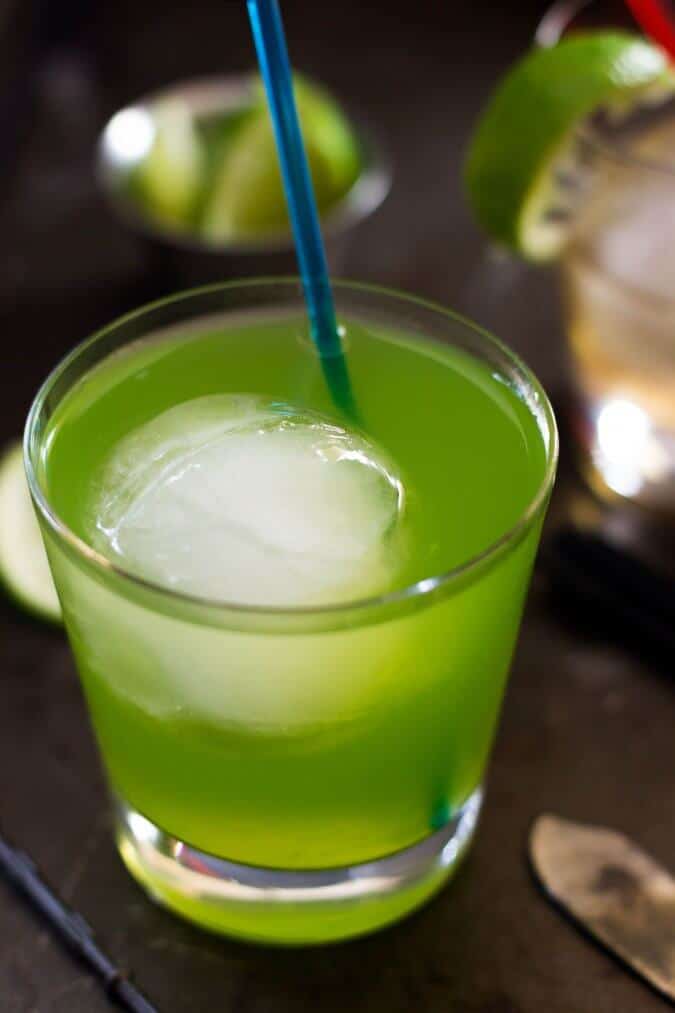 Food doesn’t play a prominent roll in Star Wars (there is some blue milk depicted, but not much else), but fans are likely to recall the scene in the dark, shady Cantina, where Han Solo is accosted by the bounty hunter Greedo and subsequently shoots (and let’s be clear, Han shot first) and kills him.

Though Greedo doesn’t have a drink with him when he confronts Han, this drink is an imagined version of what he may have sipped at the bar in the moments prior to his death–something intergalactically-imagined, brightly colored, sour, and with a potent kick of whiskey.  Greedo’s last drink.

This drink offers a subtle twist to a classic Midori Sour.  The Midori gives the drink its brilliant green color and light sweetness.  A sour mix (homemade, preferably) adds the sourness, and a shot of whiskey makes the drink a little more masculine and strong–something more likely to be served in the grungy, “rough”, violence-riddled Mos Eisley Cantina. 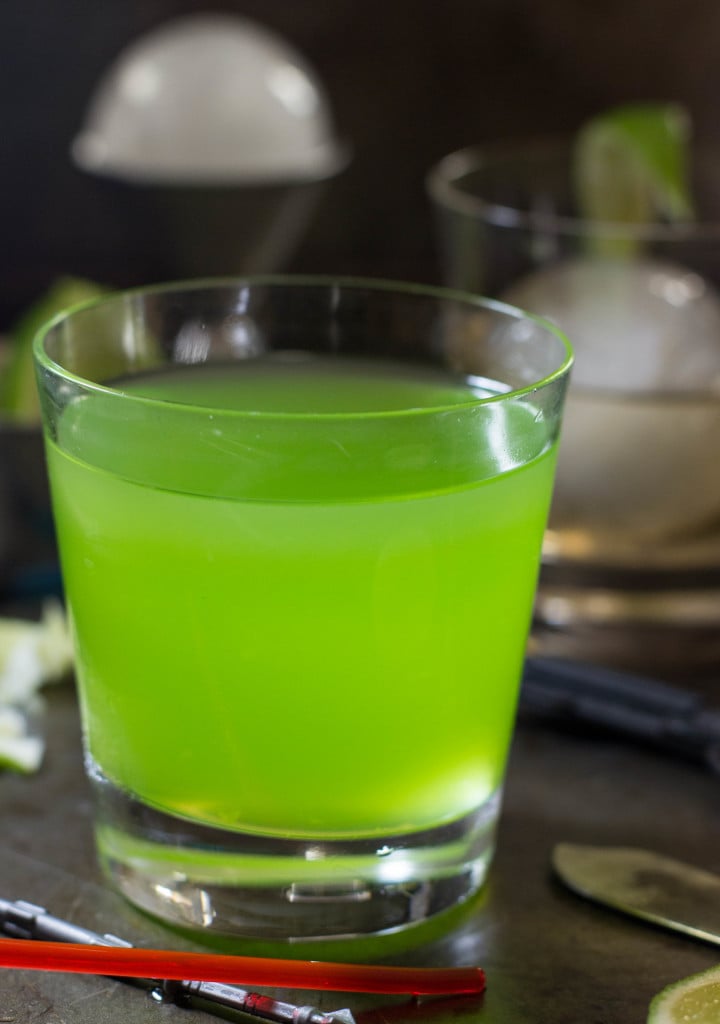 I’ll be sipping on this imagined Cantina special as I binge re-watch the original episodes (and try not to die from anticipation as I count down the minutes to my ticket time), and I suggest that you do the same this weekend.

May the Force be with you. 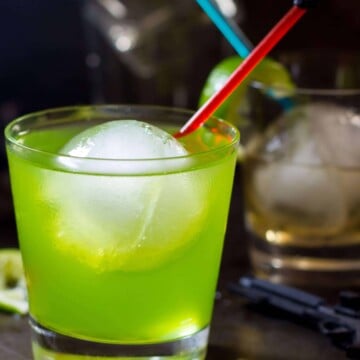