×
You are here: Home / Breads / Funfetti Cinnamon Rolls
This post may contain affiliate links. As an Amazon Associate I earn from qualifying purchases. Please read my disclosure policy.
Jump to Recipe Print Recipe

Light and fluffy, but gooey in all the right places, these Funfetti Cinnamon Rolls can be oven-ready in under an hour and are sure to hit your sweet spot. 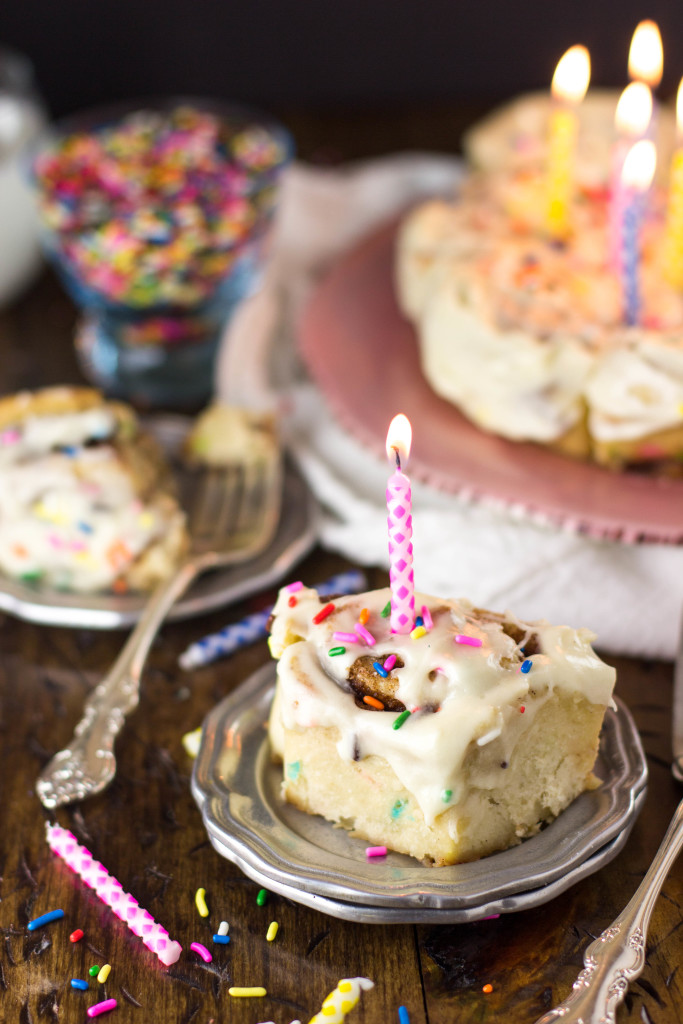 Being home-schooled for my whole pre-college life had many perks.  My favorite (aside from having at least one dog in the “classroom” at all times) was that my siblings and I always had the day off on our birthdays.

While we weren’t (usually) granted snow days, election days, or teacher’s conference days off, each of our birthdays was regarded as a mini holiday and called for the day off for the whole school.  Being one of six, this meant 5 scattered “holidays” throughout the year (my only brother had the nerve to be born during the summer, which did nothing for us). 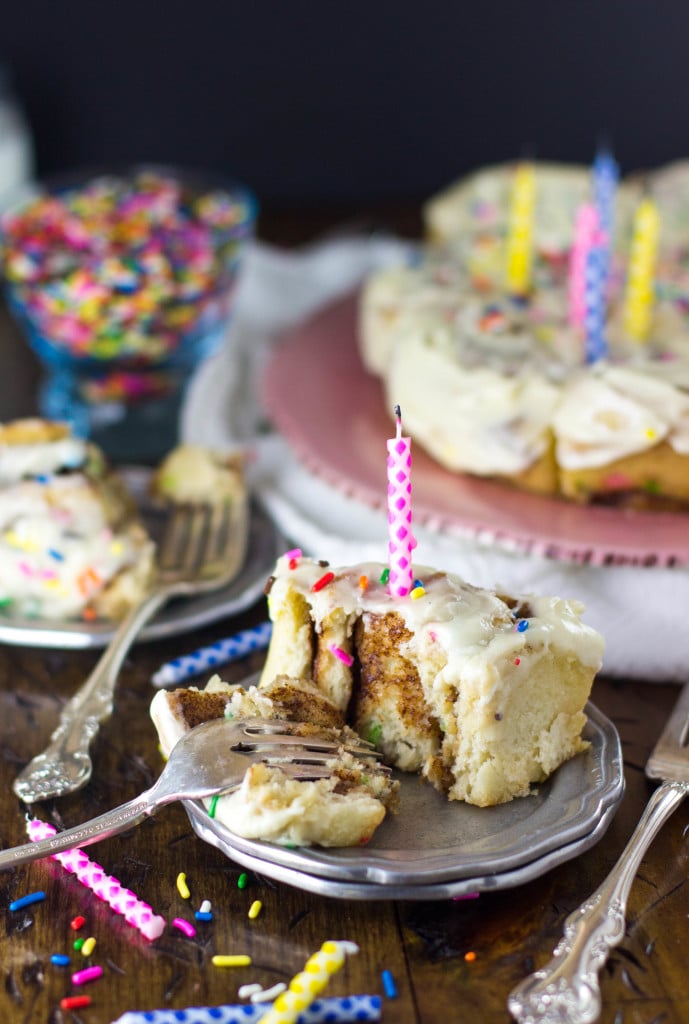 Today is my birthday, and now that I’m older (26 today… officially closer to 30 than 20… *gulp*) my day job doesn’t actually recognize my birthday as a holiday, and so I have to find other ways to commemorate the occasion.

Zach baked me a cake from scratch (which is a huge deal and I can’t wait to see how it turned out tonight!), but I thought I’d start off the morning with something festive, as well.

Something festive and colorfully sprinkled… something like these cheerful cake batter/Funfetti Cinnamon Rolls. 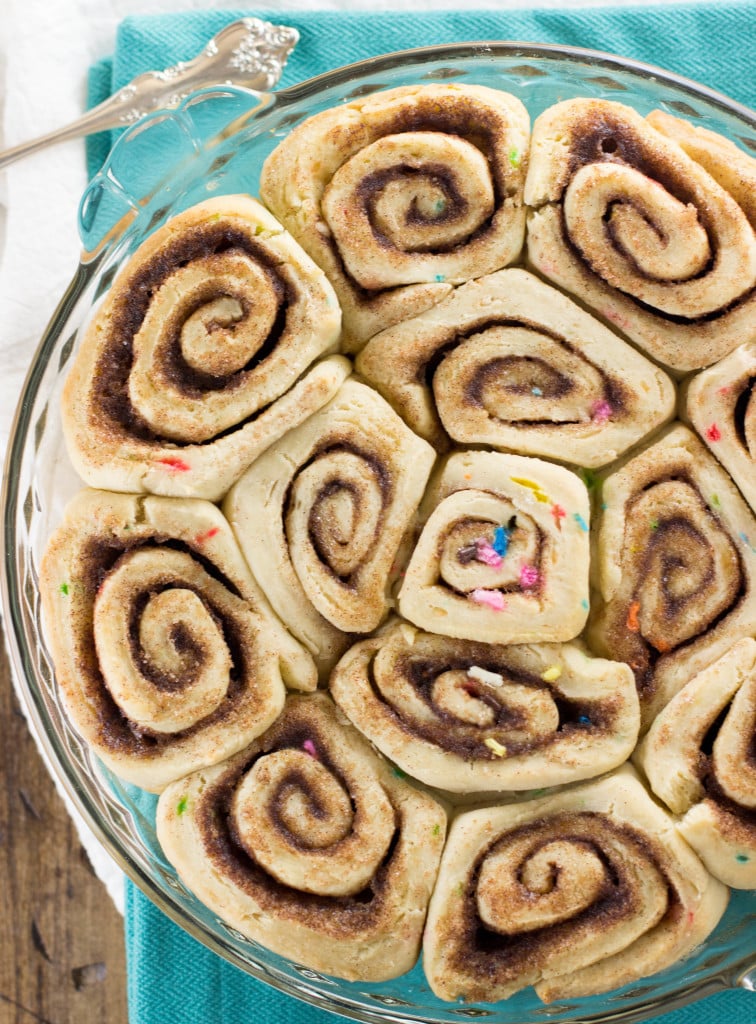 These are a bit different than my no-yeast cinnamon rolls and slightly more involved than my classic cinnamon roll recipe.

However, they turned out beautifully; light, fluffy, and buttery on the inside, filled with sweet, cinnamon and sugar (and, of course, sprinkles) and with a distinct cake batter flavor.  I know that some people would rather not use cake mix in their from-scratch goods (I’m usually one of those people), but I find that nothing else quite gives that desirable cake batter taste quite like boxed cake mix, and so I’ve incorporated it both into the actual rolls as well as into the frosting.

The frosting recipe makes just a bit more than you realistically need for 12 cinnamon rolls (or not, I don’t judge), but I use both butter and cream cheese (as I do with my classic cream cheese frosting) to keep the frosting from being too sweet over the already sweet rolls. 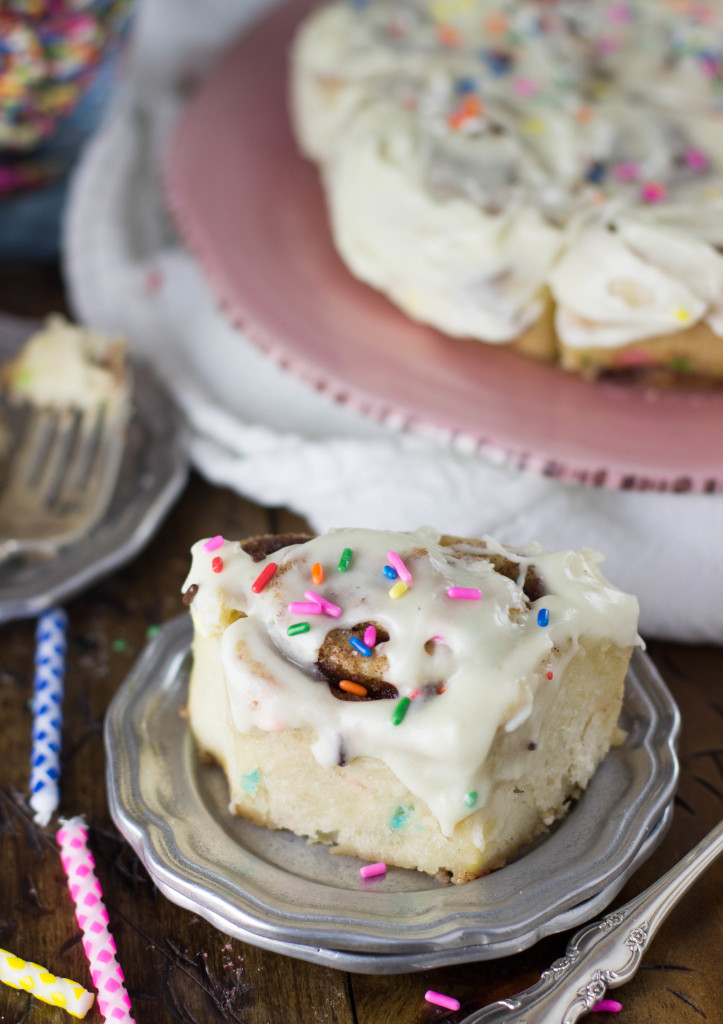 Light & fluffy, sticky and sweet, tons of sprinkles and frosting… happy birthday to me!

I hope you enjoy this recipe as much as I have! 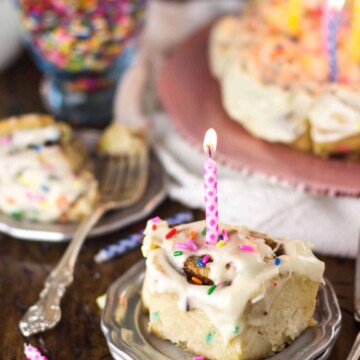