This shop has been compensated by Collective Bias, Inc. and its advertiser. All opinions are mine alone. #StartWithJifPowder #CollectiveBias

Light and fluffy baked peanut butter muffins — made even lighter with Jif Peanut Powder found at Walmart— glazed with chocolate and drizzled with peanut butter sauce. 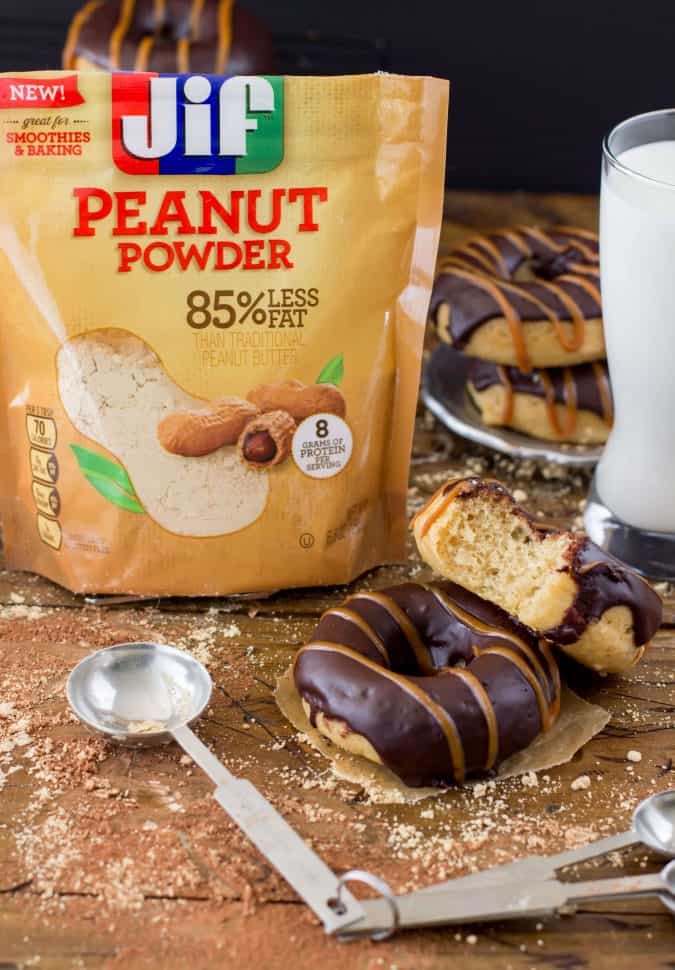 Well, it happened.  That snowstorm I’d been hearing about hit, and it hit hard, leaving us with over 30″ of snow in my neighborhood.  Some nearby streets still haven’t even seen a plow 3 days later, though Zach and I have been luckier and were able to make it to work yesterday.

Zach spent all day Saturday and a big chunk of Sunday clearing out our driveway.  He did probably 97% of the work on his own, but that 3% that I did has left me with sore shoulders, arms, and abs (wherever they are hiding, they are sore).  I was glad to get out of the house and do something, though, and shoveling is a great workout. 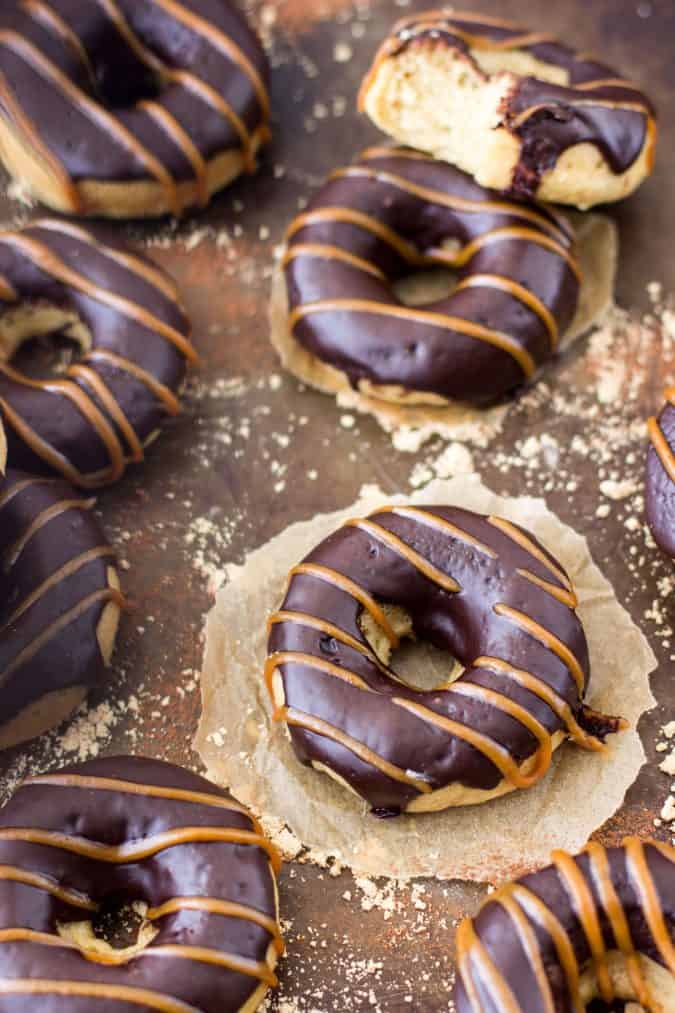 These donuts were just the thing.

I’d mentioned before that I had a few lighter recipes I wanted to share this month as I try to make better eating choices in 2016, but so far I’ve only shared my baked Snickerdoodle donuts which are lighter in that they’re not deep-fried… but still coated in copious amounts of butter and sugar, so I’m not sure how high they rank on the health-o-meter.

Today I’m finally getting around to sharing another lighter option (donuts again, obviously), but this time (hopefully) hitting a bit closer to the better-eating mark.  These are definitely donuts you can eat for breakfast without feeling guilty about later.  Made with Jif Peanut Powder, which is made from one ingredient — fresh roasted peanuts — and has the same protein as regular peanut butter with 85% less fat, it’s a great lighter option that won’t weigh you down (nor does it weigh the donuts down — these babies are so light and fluffy!). 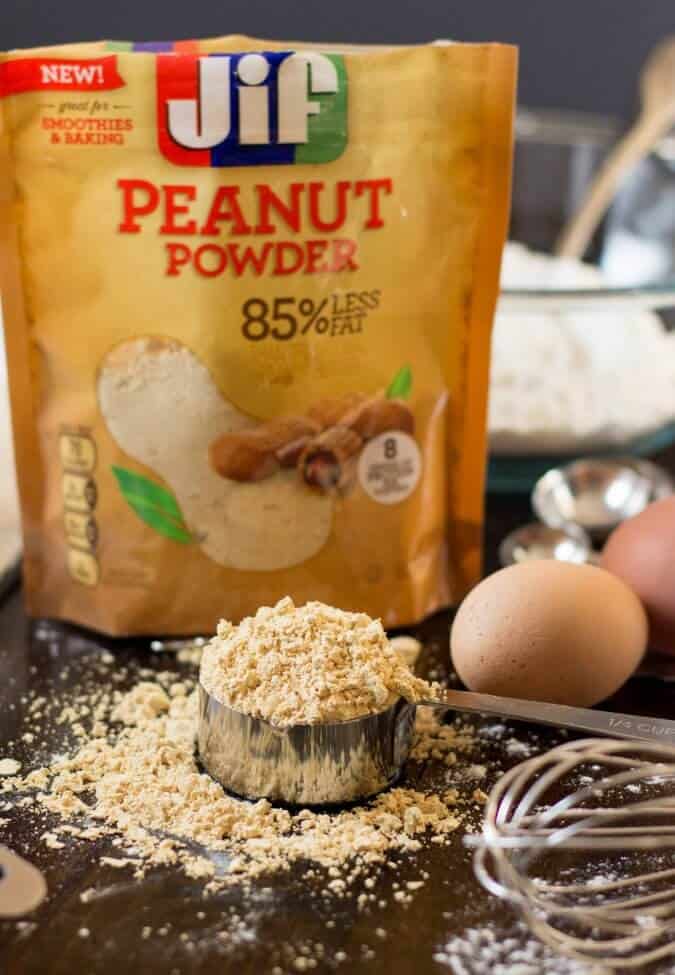 In keeping with the “lighter” theme, these donuts do not have a lot of sugar or fat in them.  Made with almond milk, fat-free Greek yogurt, and Jif Peanut Powder, I thought it would be a shame to ruin all of these positives with too much sugar.  So the sugar goes on the outside as an optional chocolate glaze, but don’t expect these donuts to be overly sweet.  These are not your grocery store, cream filled donuts, these are a respectable breakfast choice (in my opinion, anyway).

Yes, these donuts would be a bit better for you if you leave off that delicious dark chocolate glaze (though the peanut butter drizzle is still fair game, considering it’s made with the peanut powder and almond milk), but I know that I had a hard time resisting the glaze myself, so I won’t blame you if you can’t resist, either. 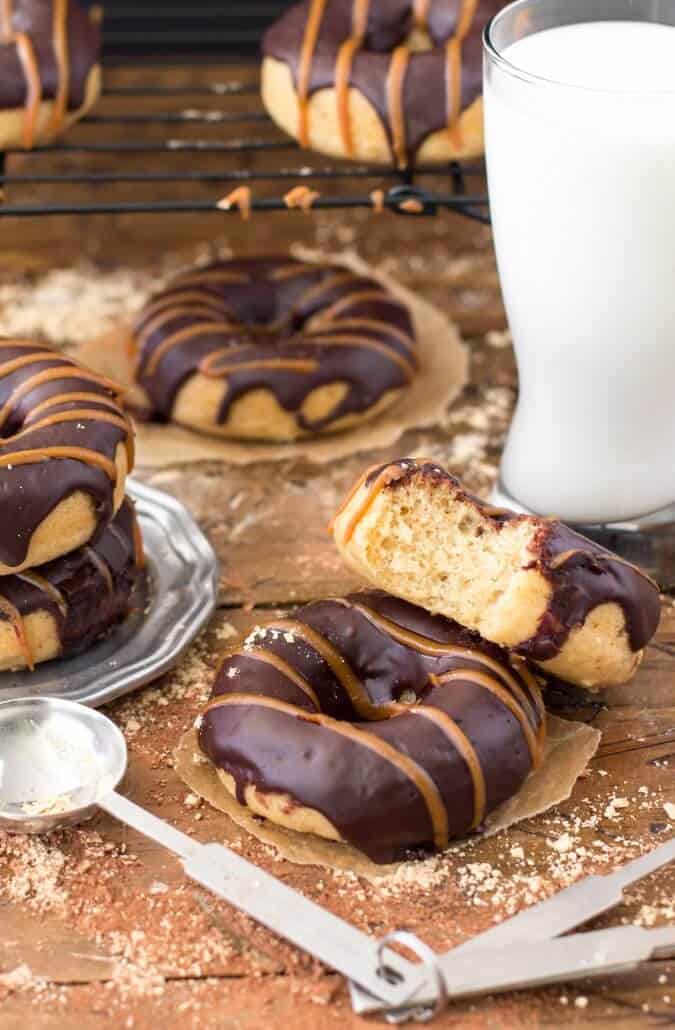 After these, I may never succumb to a grocery store donut again 😉

Head to Walmart today to pick up your own package of Jif Peanut Powder (and try out the Chocolate Peanut Powder, too!). 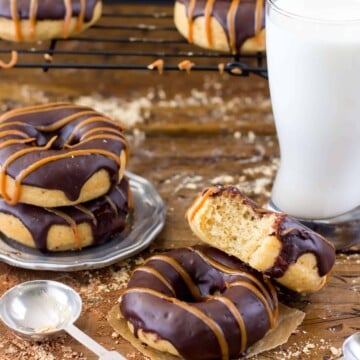 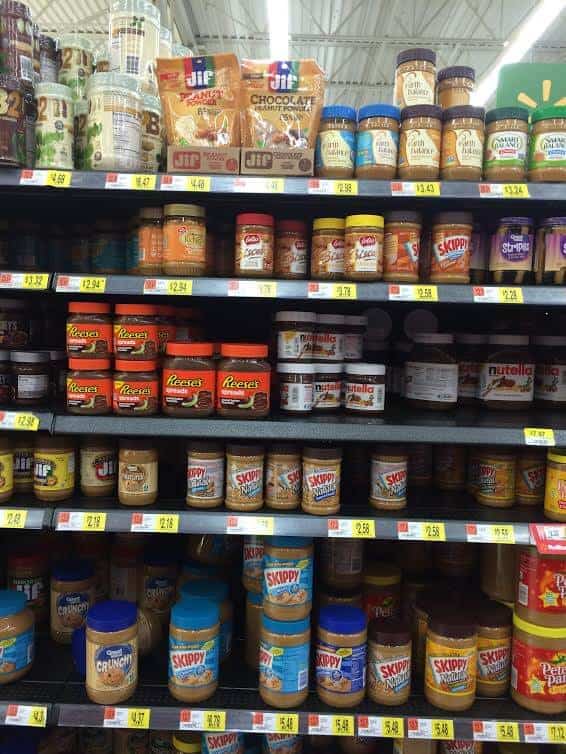